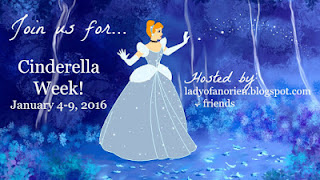 Here are my answers to Heidi's tag.  Don't forget to visit the kick-off post at Along the Brandywine for all the info and links you could possibly desire :-)

1. In the vast array of fairytale heroines, what particular character qualities most define Cinderella?

Patience and kindness and helpfulness.  I've come to realize that any adaptation where Cinderella lacks one of those three things doesn't please me.

2. What are some of the deeper, big picture differences you see between retellings where both stepsisters are nasty and others where one is nasty and one is kind? How do you think the two takes differently develop/illuminate/affect Cinderella’s character and also the overarching story itself?

I think that retellings where one of the sisters is kinder are a little more realistic -- probably because I know a lot more siblings where one is nice and one is not than siblings who are all mean.  But that means that Cinderella isn't quite so lonely, and that she needs to be nicer when she renounces her stepfamily, or maybe not even renounce them altogether.  Also, if she's got a nice stepsister, she's not quite so lonely, so there needs to be more to her attraction to the prince than just "finally someone who is nice to me!"

3. Are you an animal lover? Would you eagerly count mice, lizards, cows, and geese as friends? Dogs and cats?

I am!  And I have.  Although I've never had a pet mouse because my mom is Terrified of them (she feels about them like I feel about spiders -- sorry kids, no pet tarantulas for you), I would actually like to have a little white mouse as a pet.  And I always count pets as friends.  Well, except fish -- it's hard to love fish.  I enjoy our Betta, but I'm not all that attached to him.  (Sorry, Silver!)

Hmm.  Probably the black one that Sabrina Fairchild (Julia Ormond) wears to the party in Sabrina (1995).  I've always wanted to wear it, though I suspect the glittery jacket might be itchy. 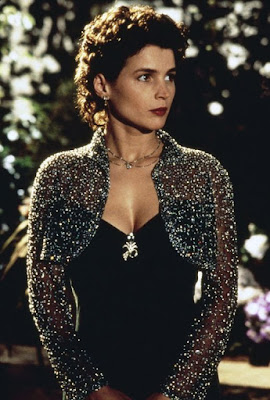 6. Do you ever think of Cinderella while doing your household chores? :)

Once in a while.  I did say to Cowboy a few months ago that I had felt like Cinderella all day because I'd been cleaning up messes made by three people who did not appreciate my efforts At All, which made him the handsome prince, and as such, he needed to rescue me by taking me out to supper.  Yeah, my kids were particularly naughty that day...

7. What major character traits do you think are essential in a faithful prince?

Determination and integrity.  He needs determination to see him through this whole "I'm going to marry a commoner and you can't stop me!" idea, and integrity so that when he says he loves Cinderella, we know he will stick by that.

8. Your top THREE favorite fairy tales (as in the original folk tales, not adaptations).

Rapunzel, The Twelve Dancing Princesses, and Cinderella.  I've read those far more often than any others, since I was very small.

10. If you could play Cinderella and the story could be set in any region of the world and any time period, what would you pick? And what would your dream ‘ball gown’ for it be like?

Oh my goodness.  What a daydream-inducing question!  Okay, well if I could make only one movie ever in my life (which is undoubtedly more than I'll ever actually get to make), it would have to be a western, so I'd choose a Wild West setting.  And I would love to wear this dress (but not the hat):

11. And (purely for fun :))… what color/s do you immediately associate with Cinderella?

Light blue and grey.  I did grow up with the Disney animated version, and her ball gown in the movie is actually a pale, silvery grey, not blue like it's generally pictured now in all the "Disney Princess" merch my daughters inhale.  But the blue has gotten stuck in my head due to aforesaid merch and the 2015 movie :-) 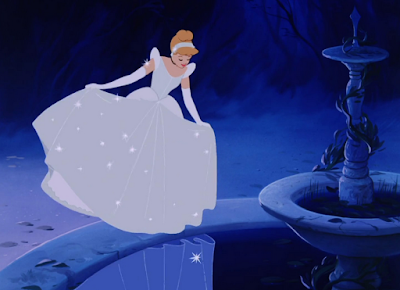