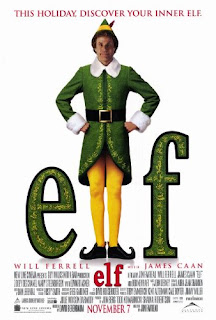 Yes, it's true.  I had never seen this movie before, even though it's fifteen years old.  The truth is, I'm never sure if I'm going to like Will Ferrell or not.  Sometimes I like him a lot, like in Stranger Than Fiction (2006).  And sometmes, nope, he's just gratingly annoying.  So I... never made an effort to see Elf.  Until now.

And now I've seen it, and the good news is, I didn't hate it!  Ferrell wasn't particularly annoying, and the overall premise was cute.

But I also didn't love it.  I watched it all in one go, it was nice, I was happy at the end, but I've got no need to run buy a copy so I can watch it over and over.  If my kids wanted to watch it when they were a little older, I wouldn't be adverse to getting it from the library again.

The best part, for me, was actually getting to see some old favorite actors in something new!  I've been exceedingly fond of James Caan ever since I first saw El Dorado (1967) in my early teens -- for years, that was one of my top 5 favorite John Wayne movies, as a matter of fact.  I knew he was in this, and I was kind of watching it more for him than anything else.

What I didn't know ahead of time was that Bob Newhart and Ed Asner were in this too!  Oh my goodness, that was such a huge treat for me!  Especially Bob Newhart, as he made his screen debut in the film Hell is For Heroes (1962) that has Bobby Darin and Steve McQueen and Fess Parker and James Coborn, and if you're not wanting to watch that movie already just from me listing off those names, then what are you doing with your life, may I ask?  Not to mention, it was written by Robert Pirosh, to whom I will forever be grateful because he created my favorite TV show, Combat!

And Ed Asner is nice too.

Also, Jon Favreau!  Oh my goodness, how did I not know this was directed by Jon Favreau?  Awwww, I like his Iron Man movies so much, and I love it when he pops up in movies.

So yeah, this was cute and fun, and I'm glad I've checked it off my to-watch list at last.

Was this movie family friendly?  Um, sorta?  A little innuendo here and there, some mild-ish bad language, a little mild comedic violence.  Like I said, I'd let my kids watch it when they were older, probably 10+.
Posted by Hamlette (Rachel) at 10:36 AM