Time for my annual list of the ten movies I saw for the first time over the past year and liked the best!  Astonishingly enough, they do not all star Alan Ladd :-o  But almost half of them do.  As always, I've linked titles to my posts if I've written about that film.  If you want to check out my lists like this from the past two years, the 2015 list is here, and the 2014 list is here.  Remember, this is me ranking them by how much I love them, not by what movie is "best." 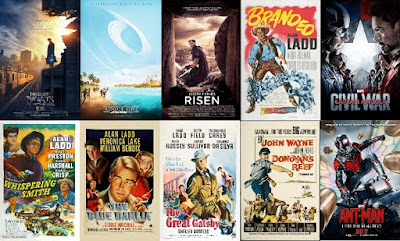 Newt Scamander (Eddie Redmayne) and his three new friends try to save a troubled teen from a bad guy who is manipulating him.  Also, they're wizards.  It's astonishingly good.

A bunch of Rebels learn that the Death Star has a flaw, so a team of volunteers head off to find the plans that will help the Rebel Alliance exploit that flaw and destroy the Death Star.  I was not expecting this movie to be so very, very good.

A Roman tribune (Joseph Fiennes) is tasked with unraveling the mystery about some Jewish guy named Jesus whose body had mysteriously disappeared from his tomb.  It's the story of the Resurrection told like a detective story, and it's one of the best bits of writing I have seen in a long time.

An outlaw (Alan Ladd) gets a birthmark tattooed on his shoulder and uses it to convince a wealthy family he's their long-lost son.  But then he has a change of heart and decides to go find their real son in Mexico.

Captain America (Chris Evans) and Iron Man (Robert Downey, Jr.) square off over the question of whether or not powered people should be controlled by the government.  All our pals have to pick sides.  I really need to write up a proper review of this, because I went from hating it after my first viewing to liking it after my second, to absolutely loving it after my third, and that's not a normal trajectory for my feelings toward movies, so you know it's something interesting and special.

Railroad detective Luke "Whispering" Smith (Alan Ladd) comes to realize that his erstwhile best friend (Robert Preston) is involved in a series of train robberies.  This is the movie that made me fall in love with Alan Ladd back in February.

Three Navy bomber crewmen return home, where one of them (Alan Ladd) discovers his wife (Doris Dowling) in the arms of a sinister nightclub owner (Howard da Silva).  Wifey dear dies, husband gets pegged for the murder, so he goes on the lam while trying to find the real killer.  It's the only original script Raymond Chandler wrote, and it's a beautiful bit of film noir.  My new blog header is from it.

Nick Carraway (Macdonald Carey) gets enlisted by his wealthy neighbor, Jay Gatsby (Alan Ladd), to help win back the woman (Betty Field) he loved long ago.  Ladd and Carey are excellent, as is Howard da Silva, but the rest of the cast ranges from mediocre to miscast.  Still, Ladd was basically born to play Gatsby.

Two friends (John Wayne and Lee Marvin) spend lots of time on their Pacific island home brawling (with each other and other people), drinking, and grappling with issues like bigotry, greed, and hypocrisy.  It's both funnier and deeper than I expected.  A wacky buddy comedy set at Christmas, but also a bit more than that.

An ex-thief (Paul Rudd) helps a scientist (Michael Douglas) and his daughter (Evangaline Lilly) stop a bad guy (Corey Stoll) from using amazing shrinking technology to do bad things.  It's quirky and fun, and amuses me greatly.

Happy New Year!  What movies did you see this past year that you really loved?
Posted by Hamlette (Rachel) at 11:03 AM