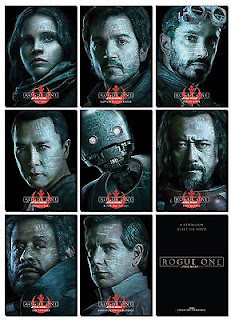 A long time ago, in a galaxy not far, far away... this movie came out in theaters.  And I finally saw it on New Year's Eve for the first time, and again last weekend.  I have a ton of things to say about it, and I don't know if I'll find the words for them all.  (I've been writing this post for four days more than a week now, ever since my brain started reviving after the flu).  But know this:  I am not marking spoilers.  And there are lots.

So... I was not expecting to like this movie so much.  (I was also not expecting to fall in love with any of the characters, but we'll get to that.)  From the trailers, I knew it was going to be about a woman who led the mission to acquire the Death Star plans that let the Rebel Alliance blow the Death Star at the end of A New Hope.  And that she was played by Felicity Jones, who I already like a lot as Catherine Morland in Northanger Abbey (2007).  And I'd heard that Darth Vader would be in it.  That's really all I knew.  The only thing that said to me, "You might love this movie!" was the fact that it took place in the Star Wars universe.

I didn't know Jyn Erso (Felicity Jones) was going to be the daughter of the guy (Mads Mikkelson, looking more handsome than I'd have imagined possible) who designed the Death Star.  I didn't know she'd team up with Cassian Andor (Diego Luna), a Rebel intelligence officer, to get the plans.  I didn't know he'd have a snarky droid named K-2SO (Alan Tudyk) who would make me both laugh and cry.  I definitely didn't know about all the crying.

Actually, I didn't cry much the first time.  I teared up a little bit in a few spots (especially over K-2SO's demise, and Cassian and Jyn's final moments on the beach, as I realized they Were Not Going to Survive), but mostly I just sat there in shock, overwhelmed by so many strong, conflicting emotions.  I was kind of numb for the rest of the day, and into the next.  Like I said earlier, I had a movie-hangover.  I went to see it the first time with Cowboy's brother, Noumenon, and he asked me what I thought once the credits were done scrolling.  I said, "Well, I fell in love with Cassian Andor, and then he died."  And then I may or may not have given the seat ahead of me a savage kick or two.  (I promise no one was sitting in it anymore.)

And that pretty well summed up my feelings about it after the first viewing:  I fell in love, and he died, and I can't think past that.  Which meant I definitely had to go see it again. 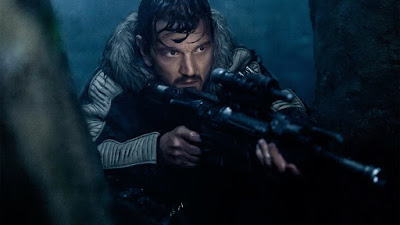 When I did go for a second viewing, I took along two pocket packs of tissues because I knew it was going to be a rough ride.  I knew Cassian was going to get mortally wounded.  I knew he and Jyn and all their compatriots were going to die on that accursed beach.  There would be many tears at those spots, but I didn't know I would cry over Chirrut Imwe (Donnie Yen) and Baze Malbus (Wen Jiang) and Bodhi Rook (Riz Ahmed) too, not to mention Galen Erso.  Well, no, I guess I knew I was going to cry over Galen dying, because of how it hurt Jyn.  And I definitely had become a Jyn fan by the end of the first viewing. 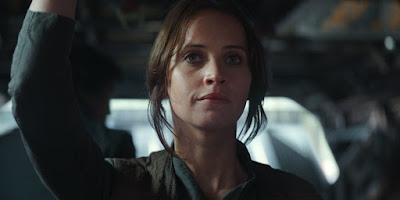 Wow, this chick, huh?  Loses her parents at such a young age, becomes self-sufficient, only learns to trust others again at the very end of her lamentably short life.

And pardon me while I rant about Lyra Erso (Valene Kane) a minute.  Bad, bad mothering there, Lyra.  Your job?  Protect your child.  Your husband's job?  Protect both of you.  Galen goes straight out to face off with Krennic (Ben Mendelsohn), even drawing him away from the house, giving you and your daughter time to get away.  Sacrificing his freedom to keep you both safe.  Most perfect job of protecting.  But what do you do, Lyra?  Abandon your daughter.  You don't even bother making sure she gets all the way to the special, secret hiding space.  And it's not because you're being followed and want to draw pursuers away from her, or because you're injured and will slow her down, or any other acceptable reason for this.  Nope, you send her on her merry, helpless way and hustle back to Galen because you're basically the biggest dope I've seen on screen in a long time.  Your words say you love her, but your actions say, "Sorry, kid, I can't stand not being there to see what happens, and I don't trust my husband to take care of both himself and us."  Badly done, Lyra.  I shed no tears and feel no remorse for your demise, except for how it hurts Galen and Jyn.  That's basically the worst mothering I've seen since Mrs. Bennet.

But let's get back to Jyn.  Who, despite seeing her loser mom killed and her heroic dad captured, manages to run and hide so effectively that she keeps running and hiding on into adulthood, both literally and figuratively.  When we meet up with her again, she's a nameless prisoner working on what amounts to a chain gang for the Empire.  What crime did she commit?  I don't know. (NOTE:  I guess they do list off her crimes during the movie, but I didn't catch it.  Next viewing!)  Not something big enough to warrant a death sentence, and not something Rebellion-related.  Although she was raised by anti-Empire militant Saw Gerrera (Forest Whitaker), she has turned her back on all things Rebellion.  She's decided she's too busy running and hiding to have time for political views.  Until, of course, Cassian and K-2SO drag her back into the Rebellion because they need her to introduce them to Saw Gerrera (and let's pause a minute to appreciate how his last name sounds a bit like both "guerrilla" and "Guevara," because I love that).

And I think that's some cool story-telling right there, because it's not what I expect.  They don't come get her because she's Galen Erso's daughter and they want her to help them rescue him from the Empire's clutches.  They don't want her to help them destroy the Death Star.  They don't want any BIG thing from Jyn.  They just need her to introduce them to Saw in a friendly way that will help them contact the pilot he's holding.  Just a small thing, just a favor in return for busting her out of prison, and she can go her merry, aimless way again.

It's a great move on the part of the Rebellion, too.  I like to think it's Cassian's idea.  "Let's bring her in slowly, keep it mysterious, keep her interested.  Watch her to see if she'd be helpful farther on, if she's sympathetic.  Let her decide to get more involved, because it will make her more committed."  Cassian is a captain in the intelligence branch of the Rebellion, and it feels like exactly what he'd come up with.  He's perfect for that kind of work, being close-mouthed, sneaky, quiet, watchful, a good judge of character. 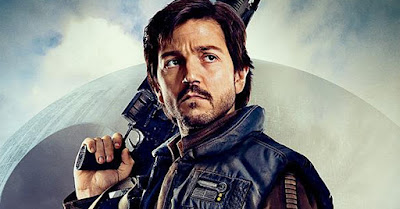 Yeeeeeeeeeeeeeeeeeeeeeees, like I said, it's love.  I am nutty about nearly everything involving Cassian, from the fact that his clothes look veryveryvery much like Han Solo's, to the way he "carries his prison with him,' to how he's simultaneously ruthless and remorseful, to the fact that he's played by the scrumptious Diego Luna.  He's incredibly loyal, but also willing to sacrifice personal interests for the greater good.  I'm entranced.

Okay, but besides Cassian Andor, I love many other things from this movie, like the way they made it intersect over and over with A New Hope.  The two wanted-in-twelve-starsystems dudes bump into them, blue milk, that moment when Bail Organa calls out Captain Antilles' name, and so on and so forth.  Those make me bounce with glee.  That moment at the end with Princess Leia -- beautiful (though, because I saw it after we lost Carrie Fisher, it made me cry both times).  Darth Vader igniting his red lightsaber and stalking toward the hapless Rebel troops was majestic and fearsome and horrible all at once.

Of course, I love stories where a disparate group of strangers has to band together to take on some great enemy.  From The Magnificent Seven to Firefly to The Avengers, that has always been a favorite storytelling device for me.  So I was probably bound to dig Rogue One just from that angle alone.  But add in a strong female lead character and a male character with a sad/tragic/mysterious backstory, and yup... I can't help falling in love with it.
Posted by Hamlette (Rachel) at 5:20 PM