One hundred years ago today, the guns fell silent all across Europe.  The Great War, which we now call WWI, had come to an end at last. 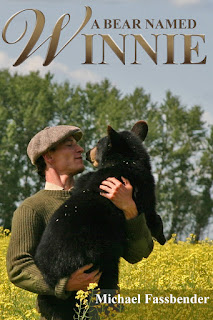 I don't know about you, but Winnie-the-Pooh was a big part of my childhood.  Mostly, I watched the Disney movie The Many Adventures of Winnie-the-Pooh (1977), but my mom also read some of the original A. A. Milne stories to us once in a while.  I didn't actually learn anything about the creation of those stories until I was an adult, and even then, I just knew that Milne based them on his son's playthings.  And that his son named his toy bear after a real bear in the London Zoo.  I never wondered where this bear came from, or why it was named Winnie.

However, my friend Eva recommended the movie A Bear Named Winnie (2004) to me one day because she knew I'm a fan of Michael Fassbender.  Even then, it took me like six months to get around to watching it after I'd added it to my Amazon Prime Instant Video watchlist.  (It's still free on Prime right now.)  Well, silly me, because this movie is so good!  It tells the true story of how a bear from Canada ends up in the London Zoo, where she is adored by multitudes of sticky-fingered children.

When a Canadian troop train stops in a small town for refreshments and fuel, Lieutenant Harry Coleburn (Michael Fassbender) hops off to stretch his legs.  A member of the Canadian Army Veterinary Corps, he displays his way with animals by calming a spooked horse. 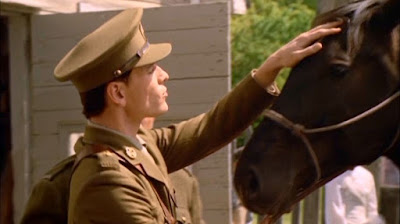 In the process, he accidentally finds an orphaned bear cub, buys it because he can't bear the fact that its going to be killed. 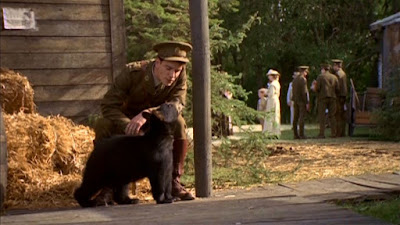 Coleburn charms his superiors into accepting the bear as a mascot for the regiment.  They name her Winnipeg, Winnie for short, and off they all go to training camp. 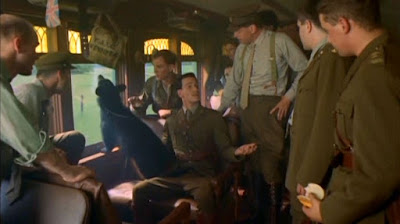 At camp, the soldiers love Winnie and her cute-little-animal shenanigans, but Colonel Barret (Gil Bellows) disapproves. 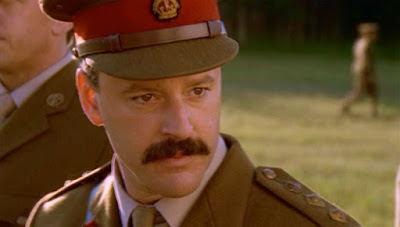 He's supposed to be turning these veterinarians into soldiers, you see, and he thinks that Winnie is a distraction.  He's not wrong.  But she's such a sweet distraction! 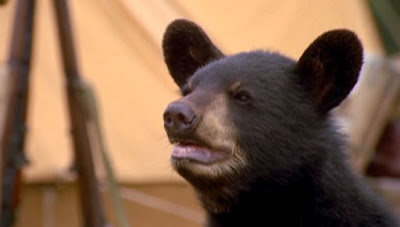 The whole first hour of the film is full of scenes of her romping about, climbing trees, eating honey, making messes, and giving Harry Coleburn slobbery bear kisses all over his face. 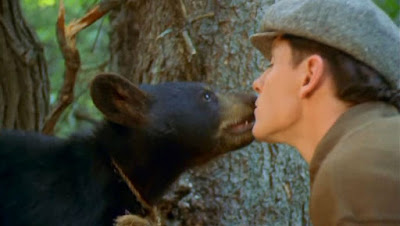 In fact, the most remarkable thing about this film, I think, is how very comfortable Michael Fassbender is with having a bear cub climb all over him. 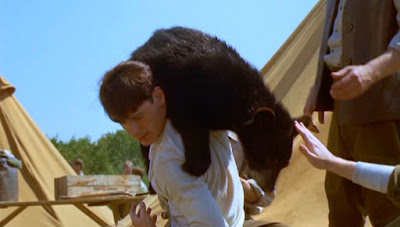 I don't know if Fassbender is an "animal person" or not, but I think he has to be on some level, because he really does look very natural with all the animals he interacts with here. 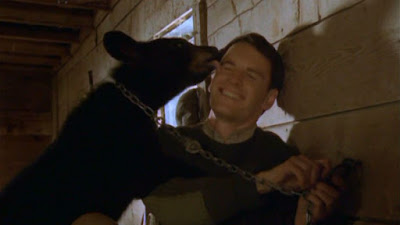 Especially the bears (IIRC, bear siblings play the young Winnie, and then a totally different adult bear plays her as an adult), but the horses too. 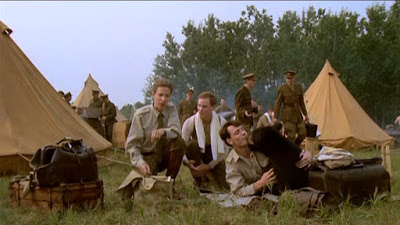 The storytelling is a little bumpy -- the first two-thirds of the film are devoted to Coleburn and his pals having fun while training in Canada, and then smuggling Winnie over to Europe.  There's also this whole thing with his commanding officer (David Suchet) having some kind of mental problems borne of dwelling on past war glory and experiences. 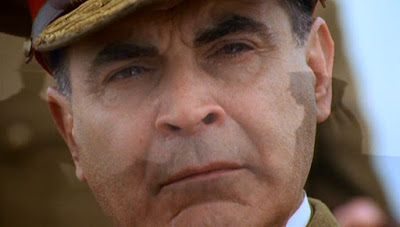 The first time I watched it, I thought that was really superfluous, but now I see that it sort of predicts what Harry Coleburn himself will later experience, and shows that war can damage a person's mind as well as their body.  So I get what they're trying to say there, even though I still think it could be handled a little more deftly. 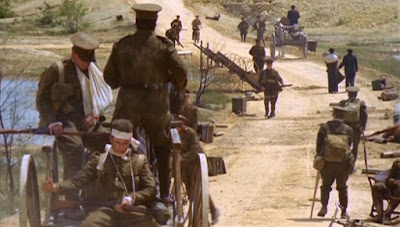 Only the last thirty minutes have much to do with the war at all, and they also feel a bit rushed.  In particular, the last section, (SPOILER ALERT) with Coleburn suffering from shell-shock and being rehabilitated by Winnie coming to visit really needed to be much longer.  I so wish they would have delved more into that, but this is somewhat aimed at kids, so I suppose the filmmakers didn't want to dwell too much on the troubles of traumatized soldiers.  (END SPOILER ALERT) 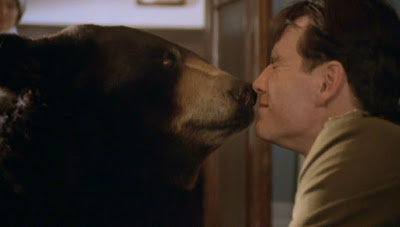 Still, it's a sweet, heart-warming story that's lovingly told, and I enjoyed it so much, I now have a DVD copy so I can keep watching it even if it stops being free on Amazon Prime sometime in the future.  So please don't think that this is not an enjoyable, watchable movie!  Because it definitely is, and I totally recommend it.  Not only is Fassbender ultra-watchable in it, the bear is adorable, and Stephen Fry pops up at the beginning and end as a zookeeper who doesn't like kids, which makes me laugh. 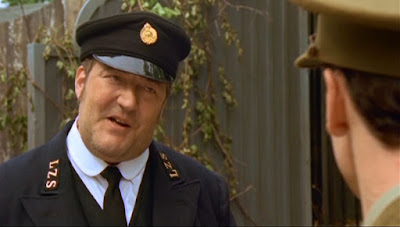 Is this movie family friendly?  Basically, yes.  There's no significant blood or gore in the war scenes, though dead characters are shown, and one character gets killed just off-screen.  There are also injured and dead horses.  A mentally unstable man brandishes a rifle and puts lots of people in danger.  Drinking is shown, as well as gambling.  And there are two or three minor curse words.  I would let my 8- and 11-year-olds watch it, but it's still a bit much for my 6-year-old.
Posted by Hamlette (Rachel) at 5:32 PM