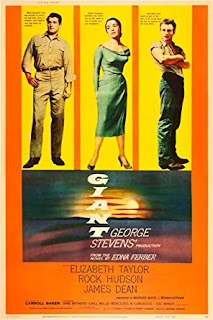 I have a deep love for fish-out-of water stories.  This is probably because I often feel out-of-place myself, and have throughout my life.  Being a Christian, a conservative Lutheran, homeschooled,  a writer, a stay-at-home mom, a homeschool parent, loving classic books, loving old movies -- there always seems to be something about me that separates me from many of the people I come into contact with.

And because I'm pretty shy, that makes it hard to know quite how to deal with a lot of social situations.  I'm always the different one.  I'm always a little out-of-step.

Anyway, I think that sense of oddballness is probably what makes me love fish-out-of-water stories.  And that love is a big part of why Giant has been a favorite of mine basically all my life.  It contains layer after layer of stories about people who are out of place, out of step, out of their element.  Watching them navigate worlds where they don't fit in has helped me do the same.  Some of them learn to swim in their new world, and some... don't.  I've learned from all of them!

Giant begins with Jordan "Bic" Benedict (Rock Hudson), a wealthy Texas rancher, visiting a New England farm to buy an expensive horse from a gentleman farmer (Paul Fix).  Bic is broad, bulky, and feels somewhat out of place in this genteel, refined Eastern setting.  Hudson expertly conveys the feeling of a bewildered bull in a shop full of eggshell teacups.  He's gentlemanly and polite to a fault, but he doesn't really feel at ease. 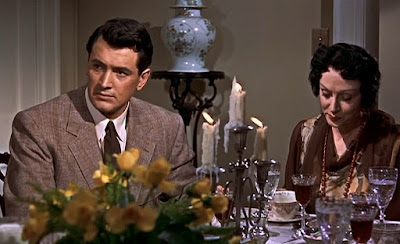 Much of his unease stems from the gentleman's daughter Leslie (Elizabeth Taylor), who is vivacious, bitingly witty, and fearless.  She ditches the British gent she'd intended to marry (Rod Taylor) without a qualm and pursues Bic Benedict so ruthlessly he's married to her before he can catch his breath. 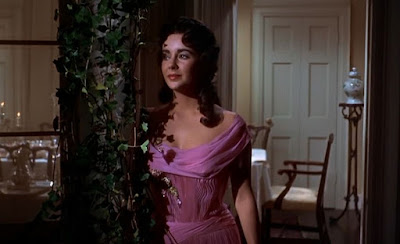 But Bic isn't going to live in New England.  You can't take a Texan out of Texas for long.  (And if I was a Texan, you can bet that's where I'd stay too.  This movie is a huge part of why I adore the state, to be honest.)  Bic and Leslie take a liesurely train trip back to Texas by way of a honeymoon, and then it's Leslie's turn to be out of her element.

Bic lives in a gigantic house in the center of his gigantic ranch.  (This is a real set on location, not a matte painting.  The exterior is just a facade, though.  Interiors were shot elsewhere.) 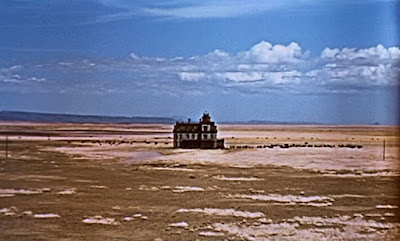 His unmarried sister Luz (Mercedes McCambridge) runs the house with martial efficiency.  She's direct, bossy, and proud -- a mirror image of Leslie, all rough edges where Leslie is refined, the cowgirl opposite of the socialite.  She goes out of her way to show this eastern debutante just how out-of-place she is in the rowdy world of Texas. 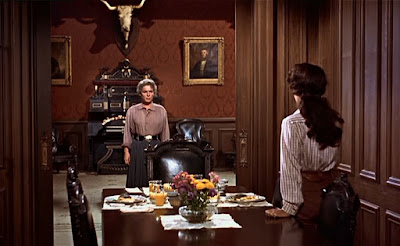 At first, Leslie quails just a little.  She can't quite get a handle on how to fit in. 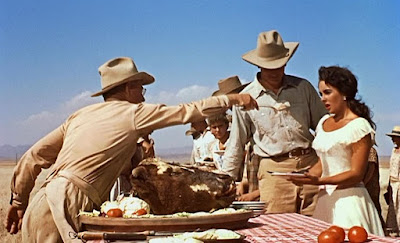 But then her inner ramrod straightens, and she turns herself into, as she terms it, a "tough Texian" through sheer willpower.  She's more than a match for her sister-in-law, and soon it's Luz who doesn't fit into this new world that Leslie is creating at the ranch. 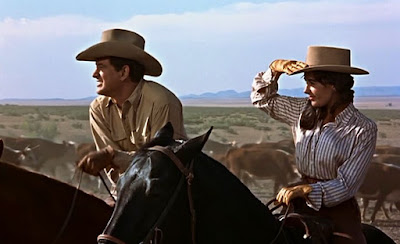 Luz resents this so much, she brutalizes the horse Bic bought from Leslie's father, a horse Leslie loves dearly.  The horse (and through it, Leslie) triumphs, and Luz pays for her unwillingness to change with her life. 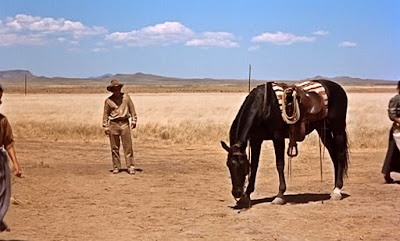 Leslie does not settle into the world of Texas, however.  She sets about creating her own version of it.  She befriends Jett Rink (James Dean), a poor ranch hand that Bic treats like trash, but whom Luz left a few acres in her will.  She takes an interest in the poor Hispanic workers who live on the ranch's fringes. 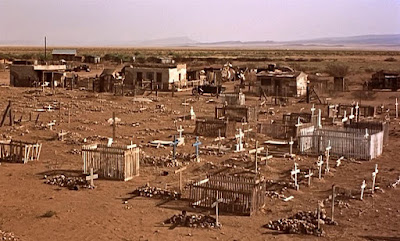 Leslie makes her own place in her new world, bending a little to fit it, but also bending it to fit herself.  She and Bic continue to clash over this periodically, but their differences in personality and lifestyle help each other more than they hurt.

Meanwhile, Jett Rink discovers oil on the little buffalo wallow that Luz bequeathed him.  He becomes rich overnight, entering a new world of his own.  The world of power and money and influence.  While Bic and Leslie raise their family, he raises oil rig after oil rig, eventually becoming wealthier than the Benedicts. 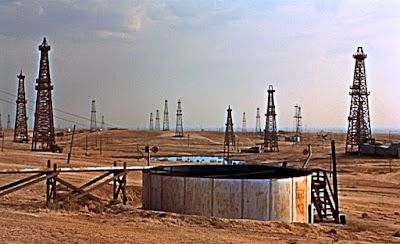 But money doesn't buy Jett happiness.  He longs for Leslie, the one person besides Luz who has ever shown him real kindness.  She's been gentle and sweet to him, no more friendly than she is to the other workers on the ranch, but to him, that's reason enough to put her on a pedestal.  Unable to ever attain his perfect woman, Jett becomes an alcoholic, lonely and sardonic, never fitting in with all the people from "old money" who still see him as white trash in a nice suit.  He can never have Leslie, but he sees in her daughter Luz (Carroll Baker) a version of Leslie he might be able to attain.

Young Luz is as savvy as the aunt she was named for, and while she's polite to Jett Rink, she pities him, and he can't stand to be pitied.  Jett never finds a way to acclimate himself to the new world he moves in, and he crashes spectacularly as a result, metaphorically and literally.

Bic and Leslie's world changes as well.  Their other daughter, Judy (Fran Bennett), marries a small, modern rancher (Earl Holliman) and abandons the big home of her youth for a smaller world, telling her father that "big stuff is old stuff."  Their son, Jordan Benedict III (Dennis Hopper), becomes a doctor, not a rancher.  He marries a Hispanic woman named Juana (Elsa Cardenas), who must navigate the world of rich white people who look down at her, even refusing to serve her in the same hair salon as her mother-in-law Leslie.

Bic opposes the marriage at first, but ends up accepting that the world has changed around him and begins to figure out who he is within this modern Texas.  In my favorite scene of the whole film, he takes on a bigoted white man who insults Juana and her son, Jordan Benedict IV.  Though Bic loses the fist fight, he gains a sense of who he is.

The movie ends with Bic and Leslie, grey-haired, but not mellowed, babysitting their two grandchildren.  Leslie confides in Bic that he has never been more her hero than when he fought for Juana's honor, even though he lost.  Bic stares at her and says, "If I live to be ninety, I'm never going to figure you out."  Maybe not, but both he and Leslie have figured out who they are and how they fit in their world, which is what all fish-out-of-water must do to survive.

(I apologize for the screencaps abruptly ending midway through this post.  My DVD suddenly quit working, or my computer did -- I'm not sure which.  I'll try to add more photos later when I can get them.)

This has been my entry for the Rock Hudson Blogathon hosted by In the Good Old Days of Classic Hollywood and Love Letters to Old Hollywood.  Follow either of the links in the previous sentence to read more entries into this blogathon!  Don't forget to check my sidebar to see what other blogathons I'll be participating in soon, including the one I'm co-hosting :-)
Posted by Hamlette (Rachel) at 8:03 PM