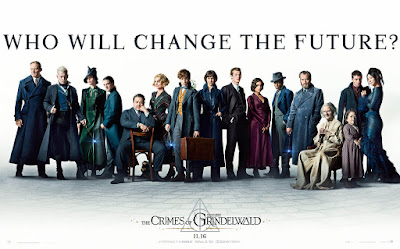 You may recall that I really loved Fantastic Beasts and Where to Find Them (2016).  In fact, I named it my #1 favorite new-to-me film of that year (though now I love Rogue One better, but that's neither here nor there).

So yes, my hopes were high.  Manageably high, I thought, but high.  With Jude Law coming aboard as Dumbledore and the promise of a lot more Johnny Depp, plus reunited with four characters I've grown to love after watching the first movie many times, what could go wrong?

Um, so things did go wrong.  I'm not saying I hated it, and in fact, I want to go see it again.  I'm going to read the screenplay as soon as I finish the book I'm currently on.  BUT.  This movie has problems.  Mainly, the picture above is the problem.  How many people are in that photo?  Sixteen?  Yeah, sixteen.  How many of those were in the first movie?  Six.

Ten new characters.  Well, really nine, because we already know and love Dumbledore from the Harry Potter books.  But still.  NINE NEW CHARACTERS, people.  Nine out of sixteen.  That's way too many new people for me to have to invest in, while still keeping me invested in the four (fine, five, counting Dumbledore) I already loved.  It's just not going to happen.

And it didn't.  I couldn't emotionally invest in the film because I never had time to.

(SPOILAGE FROM HERE ON OUT, both minor and major.  YOU HAVE BEEN WARNED.)

The new characters who were actually interesting, namely Nagini (Claudia Kim) and Theseus Scamander (Callum Turner), got almost no screen time until the end, when I was suddenly told to care about their sadness?  And the new character who got lots of backstory, namely Leta Lestrange (Zoe Kravitz), I never cared about because the writing was there, but the acting just wasn't.  Everyone else in this film was doing everything they could with their limited screen time, and she had all kinds of time to be interesting, but never was.

As for Jacob (Dan Fogler), he still stole every scene he came anywhere near.  But he was barely part of the film.  His "I always wanted to GO here!" was basically my favorite moment in the whole thing.  Queenie (Alison Sudol) got sidelined to the point where her character arc didn't make sense -- she's afraid she's going mad, and afraid of losing Jacob?  Those are two FASCINATING things to dig into, and... we never dug.  She just got moved from point A to point B and we never delved into why and how and all the juicy emotions we should be dealing with there.  Plus, in the first film, Queenie was this beautiful, surprising blend of flibbertigibbit and street-savvy.  Where did that go???

Newt (Eddie Redmayne) fared little better.  He's got some pretty juicy emotions to deal with himself, like how does he feel about the girl he loved in school getting engaged to his brother?  And then sacrificing herself for them both?  Redmayne shows us a lot just through good acting, but we should have had time to see him process this.  Instead it's bop from one action piece to the next and one plot moment to the next with no time for the characters or us to process anything.

Poor Tina (Katherine Waterston) was barely in this movie.  I'm very angry about this.  Tina's a super-cool, fresh, unique female character, and she was handed a "play the jealous female" storyline and left there.  I hate this.  I wanted to see Tina being quirky and curious and passionate like she was in the first movie, and instead, she's almost ignored.

There were very few fantastic beasts, especially compared to the first movie.  And the titular crimes of Grindelwald were what exactly?  He kills a bunch of wizards at the end.  He has his henchmen kill some people so he can steal their house.  He uses polyjuice potion to switch places with his guard, and his guard's tongue got cut out/mutilated in the process.  He throws a little monster thing off a flying coach for being too needy.  Those aren't the kinds of crimes that get you a movie title, usually.  I guess you could add lying and manipulating to them, but still.  He wasn't all that much of a Big Bad, just Johnny Depp creeping it up whenever he managed to get a moment of screentime.

So.  Um.  Yeah.  It's not that I disliked this movie, honest.  It's just that it very much frustrated and disapointed me with its lack of focus, bloated cast, and lack of emotional content.  Rowling can do better; these filmmakers can do better; doggone it, live up to your potential, people!
Posted by Hamlette (Rachel) at 4:15 PM