"Fantastic Beasts and Where to Find Them" -- Initial Thoughts 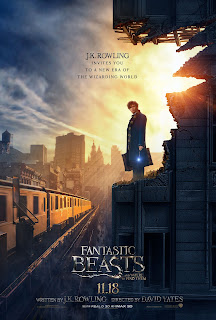 I've decided that instead of always waiting to blog about a movie until I've seen it at least twice and can review it properly, I will sometimes write up an "initial thoughts" post that is not a review, but more of a reaction.  Then later, when I've seen it again and can write up a more orderly and thought-out review, I will.  I started thinking of doing this when I saw Dr. Strange (2016) a couple weeks ago, but didn't quite decide to do it until today.

Today, I HAVE to post my thoughts on Fantastic Beasts and Where to Find Them (2016).  I can't not.  And these are scattered, unfocused thoughts, fairly spoilage-free.  Just me sharing my exuberance :-)

First, I don't know about you, but I am now firmly convinced that J. K. Rowling is going to go down in history as one of the most creative minds of all time.  Her imagination is like Newt Scamander's suitcase -- it is far bigger inside than you would ever expect, and much cooler than you could dream.  I stand in awe.

Second, wow.  Yeah, just... wow.  That's basically what I was thinking through vast sections of this movie:  wow wow wow.

Third, Newt Scamander is my hero.  I'm serious.  The guy is shy and awkward and uncomfortable around people, wizardly and no-maj/muggle alike, but that doesn't stop him from standing up to people around him in defense of any creature or person he believes needs his help.  He sees the world with kind and gentle eyes, and I want to hug him.

Fourth, I want to be friends with three of the other characters in this too.  Which means, yeah, I pretty much loved it.  Cannot wait to go see it again; hoping to find a 3D showing this time.  I went right to the bookstore from the theater and bought the screenplay AND the soundtrack,  Have already listened to the latter, and will dig into the former this evening.