At its heart, Ant-Man (2015) is a heist film.  I have a great fondness for movies about heists and/or con artists, which is one reason I liked Ant-Man so well. 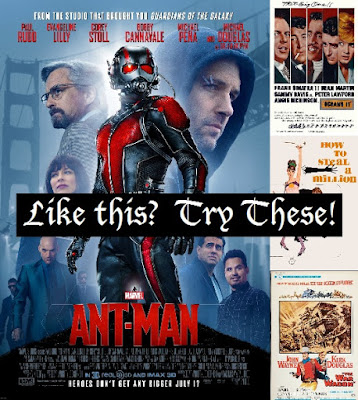 If you liked it for the clever heist, lighter tone, and stealing-for-a-good-reason theme, then here are three movies you might like:

+ Ocean's 11 (1960) -- Even if you've seen the George Clooney movies already, the original is enormous fun.  Frank Sinatra, Dean Martin, Sammy Davis Jr.,  Peter Lawford, Angie Dickinson, and so many more familiar faces all work together to rob five Las Vegas casinos in one night.  And as a bonus, so much good Rat Pack music!  (This one is fairly tame -- the Vegas showgirls wear skimpy outfits, but that's about it.  No profanity that I recall.)

+ How to Steal a Million (1966) -- Nicole (Audrey Hepburn) has an art forger for a father.  When one of his forgeries gets into a museum, she hires a man she thinks is an art thief (Peter O'Toole) to steal it before the insurers can discover it's fake.  I have never seen O'Toole more charming, and Hepburn is elegant as usual.  AND it's got a quirky romance!  Good, good stuff.  (This one has lots of paintings and statues of naked women, but they're not gross.  A little light profanity, a couple kisses, that's about it.)

+ The War Wagon (1967) -- Taw Jackson (John Wayne) got sent to prison for a crime he didn't commit.  Now he's out and looking to steal lots of gold from the "war wagon" that belongs to the guy who got him sent to prison.  He recruits a bunch of friends (Kirk Douglas, Howard Keel, Keenan Wynn, and so on) to help plan the robbery.  And yes, it's a western.  (This one has a little suggestive material in that Kirk Douglas' character is seen coming half-dressed out of a woman's room.  He also drops money down a woman's shirt.  There's also some western violence, including a great big saloon brawl.  Possibly a little mild profanity, I can't remember for sure.)