Today, I'm spotlighting three retellings of the classic Snow White fairy tale.  One of them is an obvious retelling, but the others, not so much, so here goes! 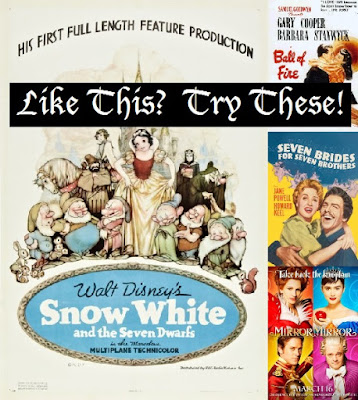 If you love a good story of a beautiful young woman helping a bunch of quirky guys and getting swept of her feet by a handsome love interest, then you might get a kick out of any of these:

+ Ball of Fire (1941) -- A nightclub singer (Barbara Stanwyck) hides from her mob-affiliated boyfriend (Dana Andrews) by helping a group of eccentric professors (including Gary Cooper) compose a new lexicon by teaching them how "real" people talk in the "real" world.  It's not quite a screwball comedy, but does have a sassy flair.  (This one has some kissing, Stanwyck in a revealing outfit singing a somewhat suggestive song, a bit of fisticuffs.  Quite mild overall.  No bad language.) 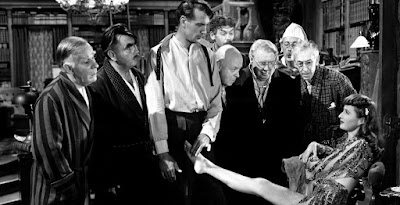 + Seven Brides for Seven Brothers (1954) -- A young woman (Jane Powell) marries an exuberant backwoodsman (Howard Keel) almost on a whim, then discovers he has six brothers at home that he expects her to cook and clean for.  Lots of dancing and singing ensues, because why not?  (This one has a little mild innuendo about a newlywed couple, girls claiming to have a baby out of wedlock so their fathers will let them get married, and some kissing.  Also involves kidnapping, but it's not scary.) 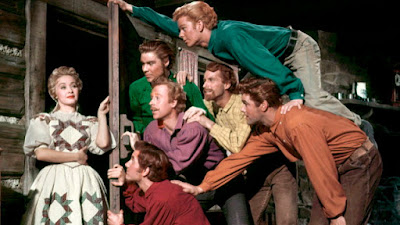 + Mirror Mirror (2012) -- Snow White (Lily Collins) escapes her evil stepmother (Julia Roberts), falls in with a band of thieving dwarves, falls in love with Prince Alcott (Armie Hammer), and tries to get rid of her stepmother.  Sean Bean fans will love the way this movie is the exact opposite of most Sean Bean movies -- if you're a fan of his, you know what I mean.  This is a vivid, quirky fairy tale that I think more people should see.  (This one has some low-cut dresses, Armie Hammer shirtless several times, characters wearing only long underwear, love potions, some violence and scary bits... no bad language except I think one instance of taking God's name in vain.  I would show this to my 9-year-old, but not my younger kids yet.) 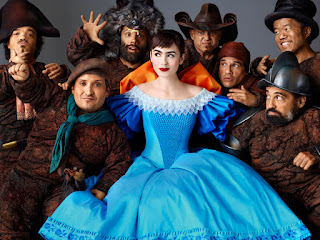 That's it for today!  Next time, I'll get back to some of the requests you've given me, but if you've got any new requests for movies you'd like me to make comparison suggestions for, let me know!

Also, Happy Thanksgiving to all my fellow Americans :-)
Posted by Hamlette (Rachel) at 3:36 PM