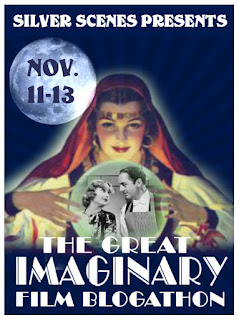 It's here!  The return of the Great Imaginary Film Blogathon, hosted all weekend long by Connie and Diana at Silver Scenes.  You may remember this event from a couple of years ago, when I dreamed up a film noir version of Hamlet and a '50s cast for The Avengers.  This year, I had intended to do a double-feature of Alan Ladd playing two of my favorite detectives, but then I had an even more fun idea.  What if Hollywood had made a movie of The Lord of the Rings shortly after it had been published?  All three volumes were out by the end of 1955, so why not have a movie made around 1960?

Remember, this was the age of the great spectacle movies.  Ben-Hur (1959), The Ten Commandments (1956), Spartacus (1960), Lawrence of Arabia (1962) -- you could tell a grand story on a grand scale with a big budget and a three- or four-hour running time.  Of course, this is also before multi-part storytelling was a thing in movies, so I'm afraid the whole epic story is getting squashed into 4 hours, and a lot of trimming is necessary.  But, in the end, it's still an amazing story.

Yeah, me either, but let's do this anyway.

(PLEASE NOTE:  There WILL be SPOILERS in this!  I mean, I'm condensing the story a lot to make it work with the idea of a 4-hours-or-less running time, but I'm adhering mostly to the book's plot.  I'm not marking the spoilers.  If you don't know the LOTR story, you've been warned.) 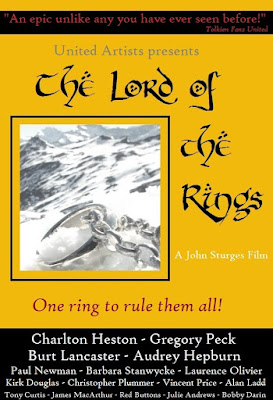 It all begins when young Frodo (James MacArthur) inherits a magic Ring from his Uncle Bilbo (Thomas Mitchell), who promptly goes off on an adventure alone, leaving his nephew to wonder what this is all about. 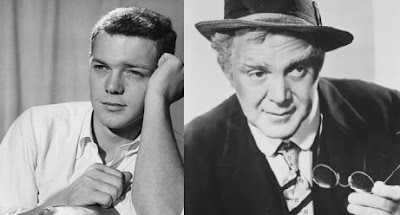 The wizard Gandalf (Christopher Lee, who was basically the greatest LOTR fan ever, right from the first publication, and always wanted to play Gandalf) arrives and informs Frodo that this is a magical Ring, the most powerful on earth, and that the dark lord, Sauron, is actively seeking it.  He enlists Frodo's gardener Sam (Richard Long) to help Frodo take the Ring to Rivendell and seek the wisdom of the elves to decide what to do with this powerful Ring. 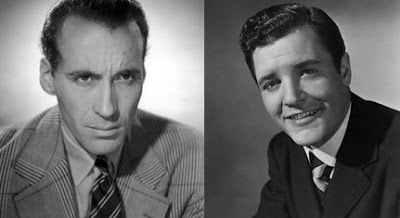 Frodo and Sam set off at once.  Along the way, they pick up two of Frodo's friends, Merry (Bobby Darin) and Pippin (Tim Conway). 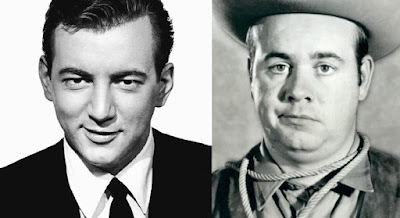 On the way to Rivendell, the four young Hobbits meet up with a mysterious man called Strider (Charlton Heston), who protects them from the creepy Ringwraiths that are following them.  He and an elf named Glorfindel (Kirk Douglas) help them evade capture and reach Rivendell safely. 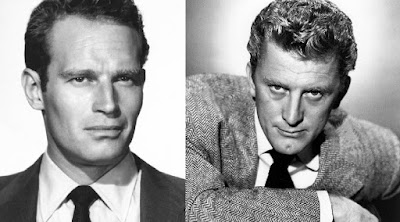 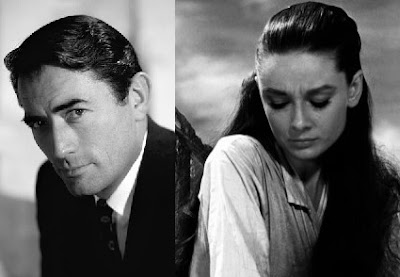 The Hobbits learn that Strider is actually Aragorn, heir to the throne of all Middle Earth.  And he's also in love with Arwen.  Elrond calls a meeting of elves and dwarves, and it's there that we meet a handsome elf named Legolas (Paul Newman) and a stalwart dwarf named Gimli (Red Buttons). 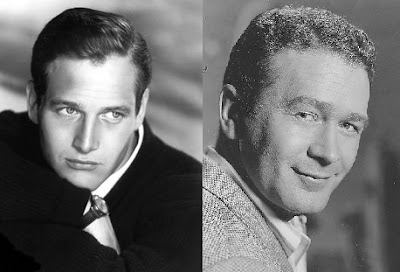 They also meet that grey-eyed man of Gondor, Boromir (Burt Lancaster), of whom I am so endlessly fond. 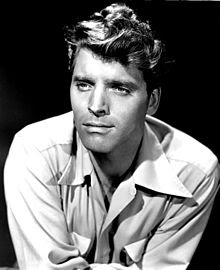 They decide that the Ring must be destroyed in Mount Doom, and Frodo volunteers to do the deed.  Gandalf, Aragorn, Legolas, Gimli, Boromir, Sam, Merry, and Pippin come along to help him, and we have our Fellowship of the Ring: 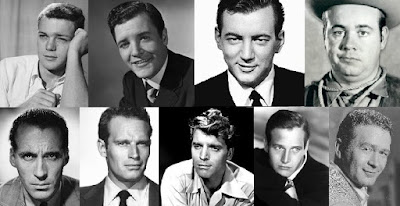 The nine set out for Mount Doom.  Various adventures befall them.  They lose Gandalf.  They arrive at Lothlorien, where they meet more elves, especially the lady Galadriel (Barbara Stanwyck) and her husband Celeborn (Laurence Olivier), who give them encouragement, advice, and helpful gifts.

Off the eight remaining members of the fellowship go, only to get splintered up when a bunch of Uruk-hai attack them, kill Boromir, and kidnap Merry and Pippin.  Frodo and Sam head for Mount Doom while Aragorn, Legolas, and Gimli set out to rescue Merry and Pippin.  The three of them soon meet up with a knightly sort of fellow named Eomer (Hardy Kruger) and a resurrected Gandalf, and the next thing you know, they're hanging out with Eomer and his sister Eowyn (Julie Andrews). 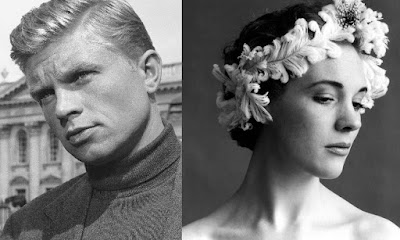 Together, they help free Eomer and Eowyn's uncle, King Theoden (Alan Ladd), from the power of the evil wizard Saruman (Vincent Price). 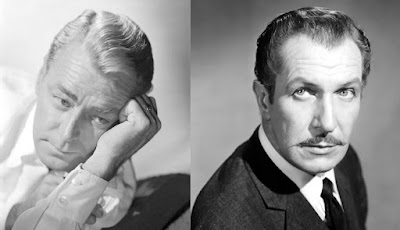 Meanwhile, Merry and Pippin get away from their captors and meet a tree-person-thing called an Ent named Treebeard (Richard Kiel, who, being more than 7 feet tall, wouldn't need much help looking like a tree).


Treebeard and his fellow Ents go attack Saruman and defeat him because he's been ordering Hobbits kidnapped and cutting down trees and being generally naughty.  There, they are reunited with Aragorn and Gandalf and everyone else.  Meanwhile, Frodo and Sam are wandering around in Mordor, trying to find Mount Doom.  While there, they meet up with one of the Ring's former owners, a creature called Gollum (Peter Lorre).  Gollum agrees to help them find Mount Doom, but he secretly plans to take the Ring away from Frodo along the way. 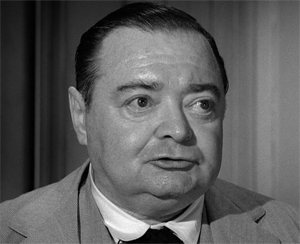 Aragorn and Gandalf agree that if the dark lord, Sauron, figures out that Frodo and Sam are taking the Ring to Mount Doom to destroy it, he's going to kill them, claim the Ring, and conquer the world.  So they decide to distract him by attacking his realm, Mordor, with all the forces they can muster.  To do this, they all head over to the city of Minas Tirith, which stands right at the border.  There, they meet Boromir's brother Faramir (Tony Curtis) and father Denethor (Christopher Plummer). 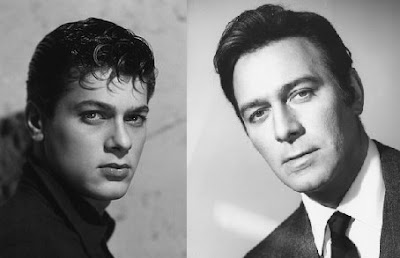 Faramir is a kind, noble youth who pledges to do anything in his power to help.  Denethor, though, wants to take the Ring himself, destroy Sauron, and rule the world.  There's a big battle.  Sauron and his forces of hideous monsters called Orcs are well and thoroughly distracted.  Frodo and Sam successfully reach Mount Doom, where Frodo succumbs to temptation and decides to keep the Ring.  Gollum tries to seize it, they struggle, and Gollum and the Ring fall into lava and are consumed forever.

Gandalf and some eagles rescue Frodo and Sam from the collapse of everything within Mordor.  He takes them back to Minas Tirith, where various and sundry characters are recovering from wounds sustained during the great battle.  During this convalescence, Faramir and Eowyn fall in love. 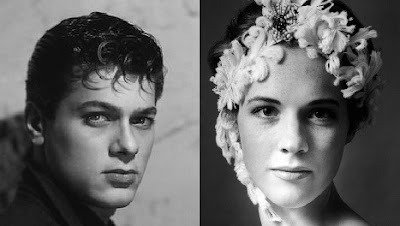 Aragorn gets crowned king and takes Arwen for his bride. 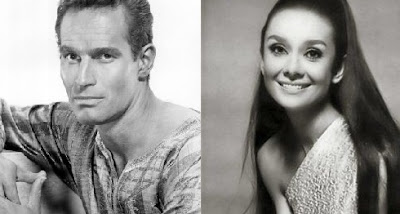 Frodo, Sam, Merry, and Pippin return home, where they free their fellow Hobbits from the tyranny of Saruman, who is a pesky person and hard to eradicate.  But he dies at last, and that means everything everywhere is as it should be.  Sam marries his sweetheart, Rosie (Emily Banks), and everyone should be happy.

But Frodo has been changed by his journey and the burden of the Ring, so he leaves to seek the Undying Lands with a bunch of their elf friends.  Sam, Rosie, Merry, and Pippin vow never to forget him.