Time to reveal this year's February blog party subject!  This year, we're going to celebrate all things Shakespeare for a whole week long. 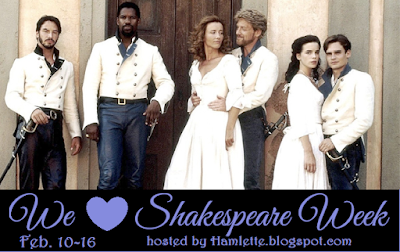 Like last year's Superhero party, or 2017's Jane Austen party, this party needs YOU in order to be fun!  Oh sure, I'll post some games.  I'll host a giveaway.  And I'll provide a tag for people to fill out on their own blogs.  But it's all the blogathon-style posts contributed by all the participants that make these shindigs so extra-fun. 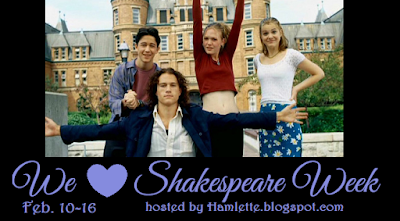 What kind of posts can you contribute?  Anything involving Shakespeare and his writing!  Movie reviews!  Top-ten lists of favorites!  An introspective discussion of why one particular play or character fascinates you!  A cool bit of history or trivia!  Whatever strikes your fancy. 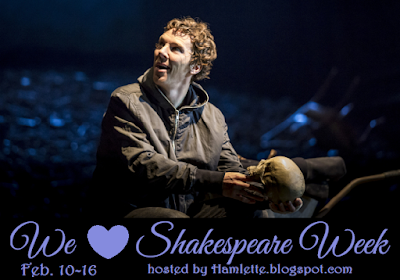 Because there are SO MANY movie adaptations of Shakespeare's plays, I do ask that there be no duplicates of individual films.  And because Shakespeare himself wrote so many plays, I also ask that there be no duplicates of reviews of his written plays either.  Now, you can focus more narrowly on a character, or a theme -- for instance, if someone has already spoken for the play Hamlet, and someone else is already reviewing your favorite adaptation of Hamlet, you could still write a post about why the character Hamlet fascinates you. 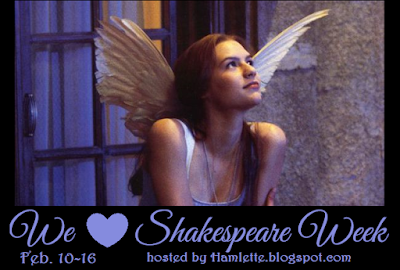 If you need inspiration, here's a list on Wikipedia of all the filmed adaptations of his plays.  Plenty to choose from! 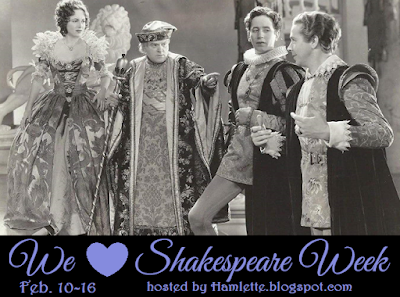 Once you know how you want to contribute to We Love Shakespeare Week, comment on this post with your chosen topic and a link to your blog, and I'll add you to the official roster below. 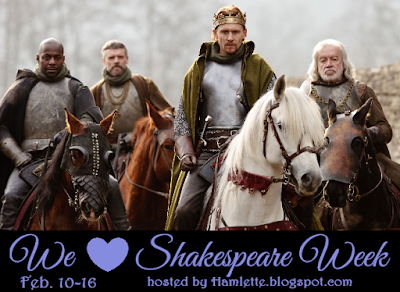 And of course, please use these buttons to spread the news of this week on your blogs and other social media platforms.  Invite your friends!  The more, the merrier. 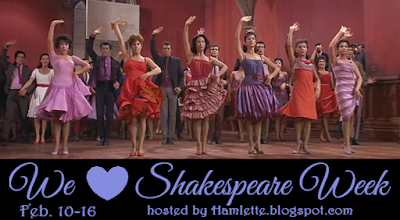 + Hamlette's Soliloquy -- review of Hamlet (1948), review of Quotes from Shakespeare coloring book
+ I'm Charles Baker Harris (And I Can Read) -- A Winter's Tale (play)
+ Sarcastic Scribblings -- mini-reviews of the 5 Shakespeare plays I've read
+ Movies Meet Their Match -- Gnomeo and Juliet (2011) and Strange Magic (2015)
+ Coffee, Classics, and Craziness -- studying Macbeth with my grandfather
+ The Content Reader -- review of The Taming of the Shrew (play)
+ Sidewalk Crossings -- Macbeth (2015)
+ Bookends and Bwopper Eels -- review of Othello (play), focusing on Iago
+ Revealed in Time -- review of Tales from Shakespeare by Charles and Mary Lamb, The Hollow Crown (2012), and Much Ado About Nothing (1993)
+ The Midnite Drive-in -- Twilight Zone episode "The Bard"
+ Stanley Wheeler -- undecided
+ Miss Elizabeth -- Gilligan's Island episode "The Producer"
+ You're next!
Posted by Hamlette (Rachel) at 4:48 PM