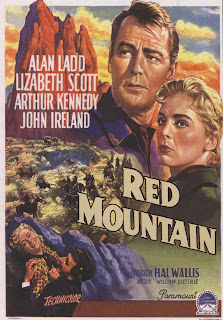 When I watch one of Alan Ladd's movies for the first time, I like to go into it knowing as little as possible.  Obviously, I know a little about it from the title and the DVD cover or movie poster.

However.  I have this really bad habit of sometimes seeing something about a movie or book that makes me start imagining I know what that story is going to be about, and I make stuff up in my head about it, almost unwittingly.  Like how I saw The Avengers (2012) in the theater a couple times before seeing the earlier MCU films, and I decided to myself from a couple images I saw that Thor (2011) was going to be about Thor learning to live and work as a human by getting a job in a quarry or a mine.  ERM, NO.  That is not what happens.  Not even remotely.  And I decided that Captain America: The First Avenger (2011) was going to be primarily a fish-out-of-water story about Cap waking up in the modern world and having to adjust to life now instead of the 1940s.  AGAIN, NO.  In fact, Thor had the fish-out-of-water thing going on, but not so much First Avenger.  And then I got weirdly disappointed by the actual movies because they weren't what I'd thought they would be, and I had to rewatch them a couple times to get used to what they were actually like. 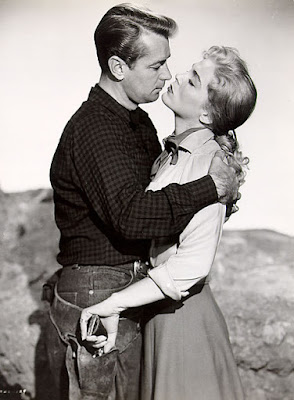 Okay, all of that rambling is here to explain why, the first time I saw Red Mountain, I didn't like it much.  Because I saw this production still from it on Pinterest and decided that oh!  This is a story of Alan Ladd's character falling in love with Lizabeth Scott's character, and she's letting him get close to her and pretending to like him back, but really, she's going to steal his gun and betray him.

THIS IS THE TROUBLE WITH BEING A WRITER.  One little image will give me a whole story idea, and I can't even stop that from happening, it just does.

For the record, I want to write the idea that I had for this picture, because it was a pretty cool story idea, and I like where it was going.

But that is NOT what happens in Red Mountain.  Like, at all.  Not even close.  So the first time I watched it, I was just annoyed that it had nothing to do with this picture -- the scenario here doesn't even happen!  It's just a production still; it's not from the movie at all.  She never once tries to steal his gun while he kisses her.  Phooey.

So I waited a couple of months and then watched it again, and this time, I liked it tons!  It's probably going to be one of my favorite Alan Ladd movies that I watch over and over.

Confederate Captain Brett Sherwood (Alan Ladd) arrives in Colorado to help General Quantrill (John Ireland) train renegade American Indians to be Confederate soldiers.  Sherwood thought the plan was to have them help the Confederate war effort, but he discovers that Quantrill instead wants to set up his own little Confederacy in the west. 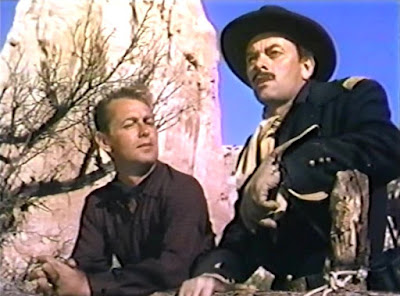 Meanwhile, there's this nice miner named Lane Waldron (Arthur Kennedy) who's found gold up in the mountains.  The local assay official gets mysteriously murdered at the very beginning of the film by a man whose face we never see (but let's be honest, if you've seen as many Alan Ladd films as I have, you totally know it's him from the moment he dismounts, just from how he moves).


Lane is blamed for the killing because he's a paroled Confederate and the people in those parts think all Confederates are vicious killers just waiting to kill some unsuspecting innocent.  I really don't like these townsfolk.  They try lynching Lane, and I happen to love interrupted lynchings, so this bit of the story plays right to me.  (I LOATHE successful lynchings, though.  I only like attempted ones that are unsuccessful, because I love rescues.) 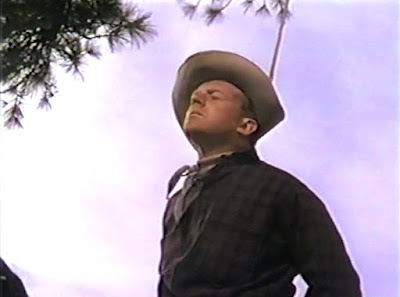 Sherwood rescues Lane, since obviously he knows Lane is innocent (I'm spoiling the early parts of this movie for you all over the place because it's not readily available and let's be honest, you're not going to find it and watch it unless you're a devoted Ladd or Kennedy fan, and if you are, you're not going to care much.  I won't tell the whole ending, though, okay?  But just so you know, nobody is SUPPOSED to know that Sherwood killed that guy at the beginning.  It's a secret, even from the audience.  This is supposed to build suspense.) 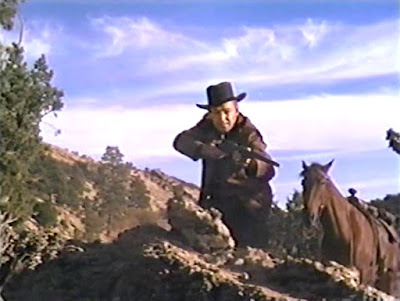 Okay, so Sherwood rescues Lane, but he can't let Lane go because nobody is supposed to know Quantrill is in the area.  But Lane has a girlfriend named Chris (Lizabeth Scott) who is intrepid and loyal, and she rescues Lane from Sherwood.  They take Sherwood captive instead so they can take him back to town and prove Lane didn't kill the assay official. 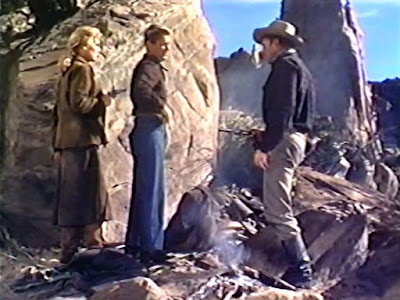 And then Lane breaks his leg, and Quantrill arrives and decides that Lane and Chris are a nuisance and are going to have to be killed because they know too much about him being there and his plans for building his own little empire.  And let's all admit that we know that although Alan Ladd's character is a hard-bitten, stubborn, antisocial crabbypants to begin with, he's going to gradually change into an upstanding, righteous man who is willing to sacrifice himself to save innocent lives because This Is What Alan Ladd's Antiheroes Do.  (Is there any wonder I love so many of his movies?) 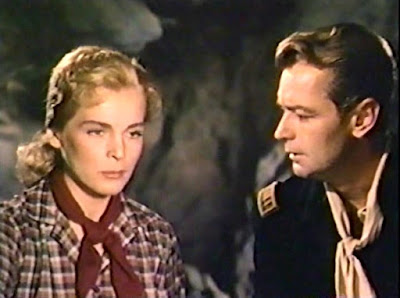 Also obviously, Chris begins to fall for Sherwood, and Lane is left out in the cold, broken-legged and lonesome.  You've gotta feel bad for him -- he almost gets killed for a crime Sherwood committed, then he breaks his leg, then he loses his girl to Sherwood.  He's pretty awesome about it, though.  This is probably the nicest Arthur Kennedy character I've ever encountered. 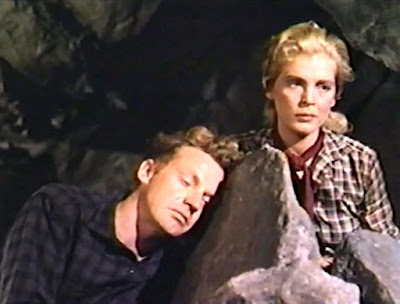 There's a nice, big gunfight or two at the end, and the cavalry literally comes charging to the rescue, which is a trope I'm personally a HUGE fan of, so yay!  Also, Jay Silverheels has a nice part, though small, as a pretty cool character named Little Crow.  As a devoted fan of the classic Lone Ranger TV show, I always love it when he shows up in a movie. 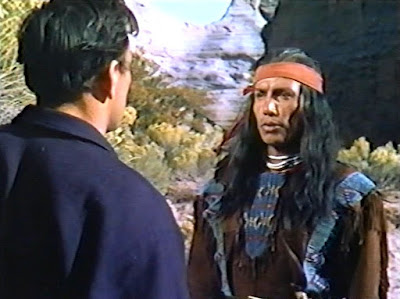 The whole movie is filled with gorgeous exteriors shot on location in New Mexico.  There's some interior stuff done at the studios too, but so much of this takes place outdoors, on location, and it's delicious.  There's also this amazing stunt where a guy rappels down a cliff and then drops like twenty or thirty feet when his rope runs out, all in one take.  I tried to screencap it, but it didn't work. 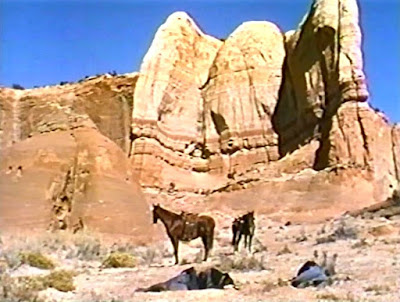 Is this movie family friendly?  Somewhat.  There are two scenes where a bad guy tries to force his attentions on Lizabeth Scott, and he succeeds in pinning her against a rock with his body and kissing her.  There's also a torture scene, though it's non-graphic and all about implied torture.  Also some western violence, non-bloody shootings and stabbings and such.  I'd say fine for ten and up?  No bad language.
Posted by Hamlette (Rachel) at 10:48 AM