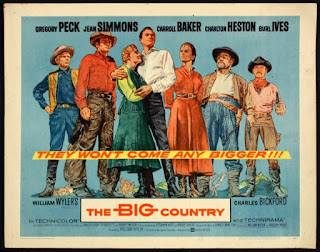 Everything in this movie is big.  The scenery, the characters' egos and ideas and desires -- even the names of the stars.  And the filmmakers don't let you forget it, either.  They crammed the movie with sweeping vistas, outsized sets, and characters caught up in larger-than-life struggles.  If you like Hollywood Epics with a capital E, this is the movie for you!

Wealthy sea captain Jim McKay (Gregory Peck) leaves his sailing ships and heads for Texas to meet the family of the girl he fell in love with back East, Patricia Terrill (Carroll Baker).  Her father, Major Henry Terrill (Charles Bickford), welcomes Jim McKay with an enormous party, during which everyone from miles around shakes Jim's hand and reminds him that Texas is a Big Country.  He dares to tell one of them that yes, he has seen something just as big before: the ocean!  They don't believe him.  Nothing could be bigger than Texas.

Patricia is headstrong, spoiled, and bossy.  Somehow, remarkably, she's acquired the friendship of a sensible, clear-sighted, and intelligent woman named Julie Maragon (Jean Simmons).  Maybe it's because they're just about the only unattached young women in the area, or maybe Patricia likes that Julie gives her good advice and doesn't defy her bossing.  Much.

Jim McKay soon learns that Major Terrill has an arch-enemy, Rufus Hannassey (Burl Ives).  The Hannasseys and the Terrills have been feuding for a long time now.  Why?  Mostly because they're the two biggest landowners in the area, and because the heads of both families are ornery and mean.

The only reason the area has had any semblance of peace is that there's only one good water source, the Big Muddy.  And neither Terrill nor Hannassey controls the Big Muddy.

Julie Maragon does.  For decades, she (like her father before her) has allowed both the Hannasseys and the Terrills to water their stock in the river on the condition that they keep the peace.  The first to break that uneasy truce will lose all rights to use the vital water.  This puts a lot of pressure on Julie from both sides, but she bears up under it with grace and conviction.  She's going to keep the peace in this land if it kills her.

Now, Major Terrill and Patricia decide that, because Julie is Patricia's best friend, Julie can be convinced to give Patricia her land and all the water rights as a wedding present when Patricia marries Jim McKay.

However, Rufus Hannassey's oldest boy, Buck (Chuck Connors) has decided that Julie fancies him.  Buck is a crude, cowardly bully, so used to getting his own way that he thinks he can get Julie to marry him just by telling her she wants to.

As you might imagine, Julie Maragon is very tired of being pulled and pushed back and forth by these people.  She'd like nothing better than to find someone to sell her land to, someone that she could trust to continue the agreement that the Hannasseeys and Terrills have to play nice in order to use the water.

And then she finds someone who's willing and able to take on that task:  Jim McKay.

The funny thing is, everyone else in the movie is utterly certain that Jim is an inept tenderfoot who's scared to do anything manly.  They've marked him as a timid greenhorn who couldn't stand up to a medium-strong wind.  That's especially true of Steve Leech (Charlton Heston), Major Terrill's sort-of-adopted-son who runs his ranch for him.  He tries to trick Jim into riding a bronc, but Jim won't do it, so he decides Jim's a coward.  He and everyone else in the film think if a man won't show off what he can do, then he can't do it.

Everyone except Julie Maragon.  She sees Jim McKay for what he is -- so comfortable in his own skin, so confident in his own abilities that he has no need to parade them before others.  So Julie sells Jim her ranch, and they get the transaction all properly deeded and recorded.  Just in time, too, because Buck has convinced Rufus that Julie's willing to marry him.

So the Hannasseys kidnap Julie and tell her she can't go free until she's either signed over her land or married Buck.  By this time, Buck doesn't much care about the water anymore, he just wants Julie, any way he can get her.  And he almost does get her, though happily he's too dumb to be quiet about it, and his attempt on Julie's virtue comes to nothing.

Julie's kidnapping is all the excuse Major Terrill needs to go riding out to the Hannassey homestead, looking for blood.

Meanwhile, Jim has seen Patricia for what she really is: selfish.  He's broken with her for good.  Now he offers to ride into the Hannasseey camp alone to see if he can rescue Julie without bloodshed.

Also, he wants to find out if she might regard him as highly as he does her, though he doesn't mention that as one of his reasons.

The two sides engage in a mighty battle, and you'll be happy to know that murderous, would-be-rapist Buck Hannassey gets what he deserves.

Now, why do I dig this movie so much?  Partly it's the cast, as I really like Gregory Peck, Jean Simmons, and Charlton Heston.  They've all been among my favorites since I was a teen.

But a lot of it is because this is a fish-out-of-water story where the ocean fish, Jim McKay, doesn't just survive perfectly well in the waterless world of Texas, he thrives.  And not by conforming to the local customs.  He goes about things his own way, he solves problems without being asked, and he generally behaves beautifully to everyone involved.  He's a hero in every way, and I love that he ends up with a woman he can respect.  A woman who appreciates him for who he is, not for how he makes her look.  And a woman who's not afraid to work hard and wait a long time to make her dreams come true.

EDIT: I forgot to mention the music!  Jerome Moross's score for The Big Country is one of my absolute favorite soundtracks of all time.  It's magnificent.  I wrote vast chunks of my book Cloaked and its short sequel "Blizzard at Three Bears Lake" while listening to it.  You can hear it here on YouTube in its entirety, or just the (brilliant) main title theme here, also on YouTube.

Is this movie family-friendly?  Well, there's quite a lot of violence, but '50s-Hollywood violence, so lots of punching and kicking and shooting, but nothing more gory than a little red paint for blood.  Drinking and smoking occurs.  There's a little very mild bad language.  There are two instances of a man forcing a kiss on a woman, plus quite a few scenes of people kissing and enjoying it.  I mentioned that there's a rape attempt, though kids will probably see it as just a sneaky attack of violence, as all rapey intentions are implied.  Fine for kids 10+, especially if they watch a lot of old westerns and understand that the violence is just pretend. 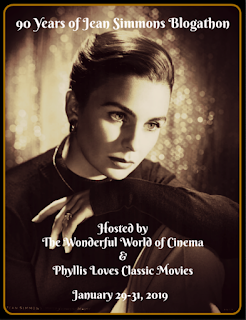 This has been my contribuition to the 90 Years of Jean Simmons Blogathon hosted by Phyllis Loves Classic Movies and The Wonderful World of Cinema.  Visit either of those blogs for the complete list of the blogathon entries!
Posted by Hamlette (Rachel) at 3:56 PM