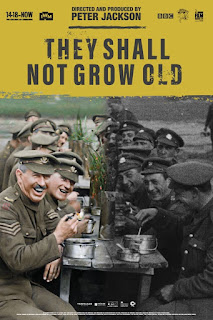 I'm so glad they brought They Shall Not Grow Old back to the theaters for a whole week this month.  I missed the showings last month and last year, which were just for a weekend, and I was very bummed about that.  Because I could see that this was going to be a very, very special documentary, one I absolutely wanted to see on the big screen.  (I mean, how often to documentaries get shown on the big screen these days, anyway?  Sometimes science things, yeah, but history documentaries?)

So anyway, I went to see this yesterday evening.  And I'm still struggling this morning to find words to convey all that I'm thinking and feeling about it.  Maybe I should begin by just explaining what this is.

About four years ago, Peter Jackson (yes, that Peter Jackson) was approached by London's Imperial War Museum with the idea that he could make a documentary from their archived footage that would commemorate the 100th anniversary of the end of WWI, November 11, 2018.  They would give him unlimited access to everything in their archives, film and sound recordings both, and he could make anything he wanted with them, as long as it was something interesting and different from the other WWI documentaries out there.

Peter Jackson and his filmmaking team spent about a year looking at footage shot during the Great War, and listening to about 600 hours of recordings of wartime memories from veterans of that war.  Then they distilled all of that into a two-hour depiction of what life was like for the average British soldier, from enlistment to returning home after the Armistice.

And so, you know how Jackson has become a master at making unreal things look real?  And that he has a veritable army of filmmaking effects people at his beck and call?  He decided to take all the technology and creativity and technical abilities that he and his production company uses to make pretend things seem real and use them to make real things feel more real.  So they digitally cleaned up all this film, to the point where it looks like it was filmed last year. 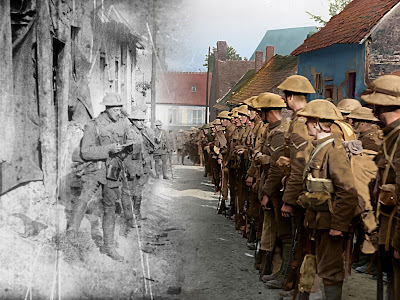 What kinds of stuff did that entail?  Well,, back in the 1910s, movie cameras were hand-operated -- the person taking the movie had to stand there and crank a handle on the side of the camera to turn the film spindle thing to make the film go past the aperture and take the movie.  That's why really old film looks jerky and funny -- it's not being mechanically wound at a smooth speed.  So they had to smooth out all the film and make it run at natural-looking speeds so that the people are walking at a normal pace and so on.

And then they hired expert lipreaders to decipher what all the soldiers in the movies were saying, since of course WWI was the era of silent film because they hadn't figured out how to record sound and picture at the same time.  So the lipreaders figured out what all the people in the scenes were saying, and they had actors record these bits of dialog.  Foley artists worked in all the sound effects so that the marching feet, the gloppy mud, the rattle of equipment, the horses and the explosions and the gunfire and everything else was present too.  Peter Jackson has been fascinated by WWI all his life because his grandfather fought in the war, and he's amassed a museum-quality collection of uniforms, periodicals, and even weaponry that includes heavy artillery pieces from that war.  So they were able to record the sounds made by those actual kinds of artillery being opened, moved, loaded, and so on. 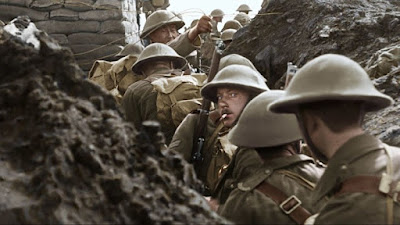 And then they began to colorize the film.  They didn't colorize all of it because colorization is a very painstaking process, and to get it right, you just have to spend all the time in the world on it so it looks real and not like those slap-dash colorized movies you used to get on VHS back in the '80s when Ted Turner decided more people would watch classic movies if they were in color instead of black-and white and he had loads of them colorized.  This is good colorization, very good indeed.

Oh, and there's no narration.  No guy with a plummy voice speaking well-crafted summations of what is going on.  The whole story of going to war, being at war, and surviving war is told with those voice recordings of actual veterans speaking about what they experienced.  Which, at times, was even more affecting than the images on the screen. 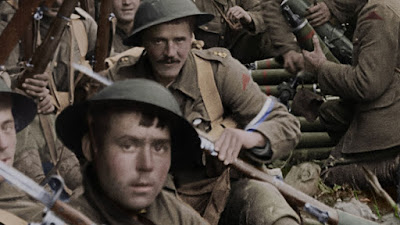 But the images were powerful too.  So powerful.  The MPAA has rated this R because there are a LOT of pictures and movies of dead and wounded soldiers.  The film doesn't flinch from talking about toilet facilities and the lack thereof, rats that ate dead bodies, soldiers that had to march past and sometimes over their fallen comrades and enemies, lice, trench foot, mustard gas, and the general desperation and depravity and horror of war.  This is not a documentary to show to your school-age children, but it is absolutely one to watch as an older teen or adult.

The effect of all this is to make these soldiers from a hundred years ago look like real people, human beings instead of flat pictures in a history book.  They smile, they laugh, they play, they look terrified, they pray.  They look straight at the camera because a camera was an oddity, so they sometimes seem to make direct eye contact with the viewers.  They are humanized. 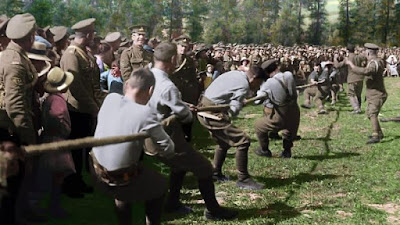 To get the colors of the landscapes correct, Peter Jackson visited France and Belgium briefly, taking thousands of pictures of the countryside.  The only time where I was moved to tears was during the post-credits interview (more about that below), not the film itself, when Jackson talked about visiting a sunken road that they'd identified as being the very place where a piece of film was shot of soldiers waiting to be sent "over the top" to charge the enemy lines.  Something about the way that the landscape there was still so similar to the film shot a hundred years ago, but the fact that the soldiers in that piece of film all were living out their last half hour or so of life before our eyes, so to speak, because their regiment was wiped out in the assault -- that was especially moving.


I was left with a profound sense of respect for those who endured the trench warfare of WWI, a respect bordering on awe.  And also a wish to learn more and more -- for the past few years, I've been drawn to books set during this time period, or books about the war itself, and I'm definitely going to be seeking out more of those now.

As I mentioned above, at the end of the film, after the credits, they played a 30-minute interview with Peter Jackson where he shared the process behind making They Shall Not Grow Old, and I wish that had been at least twice as long because it fascinated me.  Most of what I shared here is from what he talked about in that interview, though I've been reading stuff online about it this morning too.  Anyway, he said that all he wants viewers to take away from this film is the desire to learn about how this war affected them personally, even if they don't realize it yet.  Basically everyone in the world has a grandfather or great-great-uncle or great-aunt or distant cousin who served in the war or contributed to the war effort at home, and we need to learn about our own history and how that has shaped who we are as individuals and as a society today.

Okay, that's at least some of what I wanted to talk about.  If this is playing anywhere near you, I strongly encourage you to seek it out.  If you can't do that, I'm sure they'll release it to DVD, and then you need to get a copy and watch it.  It is truly important.
Posted by Hamlette (Rachel) at 10:45 AM