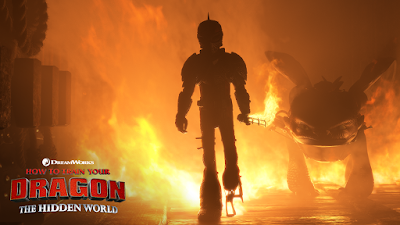 I went to see this movie twice this week.  Once to see if it would be too scary/intense for my kids, and then again with my just-turned-9-yr-old, the only one I felt could handle it.  My 11-yr-old doesn't enjoy watching suspenseful things in the theater, and my 7-yr-old has been battling nightmares lately, especially after watching a couple of new movies that I felt were less scary than this one.  So they stayed home with Cowboy and I took my birthday girl, the Dragon Mama.  She was 100% fine, as I knew she would be.  Sorry, other kids, you'll just have to watch it on DVD in a few months.  I think you'll enjoy it more that way anyway.  Sam can wander around half-watching the stressful parts and I can put a blanket over Boo when there are scary parts.

Okay, so I am very conflicted about this movie.  I definitely did not love it the way I love the first movie.  But I liked it a lot better than the second one (which I will probably like better the second time I watch it, whenever I manage to see it again, but overall, not as much my thing).  Give me another viewing or two, and I'll probably love it.  But not like the first one.

Like that first one, this is a movie I cry through.  In fact, I cried more the second time than the first.  Tears running down my face, me trying to sniffle quietly, and so on.  Because... it's all about growing up and letting go of loved ones and moving on.  The first viewing, I was like, nope, I don't like this at all, because I generally hate stories about growing up.  But the second time through, I was more like, wow, this is one of the best movies about growing up and moving on that I've ever seen.  So I kinda loved it, actually... but not in a "let's watch it over and over" way like I love the first one.  More of a, "once in a while, when I'm feeling pensive, I'll rewatch this" way.

There's only one thing I don't like about it, actually, and that's that they spent all this time explaining that the bad guy is using dragon venom to control his evil dragons, and then they never went anywhere with that.  Hiccup never smashed the vials and set those dragons free or anything.  So that felt a little like a gun-on-the-mantel-that-didn't-get-used, to me.  But it's a pretty minor quibble.

Also, tiny little boy Hiccup in the flashbacks?  IS THE CUTEST THING EVER AND I WANT TO HUG HIM.  This 45-second scene might be my favorite thing in the whole movie.

EDIT:  Is this movie family friendly?  There's a lot of explosions and fighting, the bad guy is creepy and has really evil dragons, there's a lot of peril for characters, etc.  It's on par with the second film in those respects.
Posted by Hamlette (Rachel) at 1:17 PM