"The Oldest Trick" -- New Fanfic Story By Me

It's been a few years since I last wrote any fanfiction for my favorite show, Combat! because I've been concentrating on my Once Upon a Western books and stories instead.  But back in November, I whipped up a short fanfic story during NaNoWriMo that turned out really well, so I've polished it up, and I now present it as a Valentine's Day gift to my fellow fans, and a birthday remembrance for Vic Morrow, who would have been 90 today.

You can read my new story, "The Oldest Trick," here on the Combat! fansite I co-run, Fruit Salad.  It focuses on Sergeant Saunders, my favorite fictional character, who was played by Vic Morrow.  And it brings in another character who will be familiar to fans of the show, though he was only in one episode.  In it, when Saunders fails to reach a scared new soldier, someone else gets through to him, which unsettles Saunders a little. 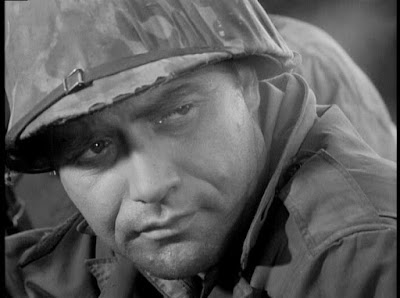 Happy birthday, dear Vic.  You're so very special to me, and I'll be forever inspired by you.  So much so that I'm going to co-host a blogathon in your honor -- more about that in my next post.
Posted by Hamlette (Rachel) at 6:51 AM