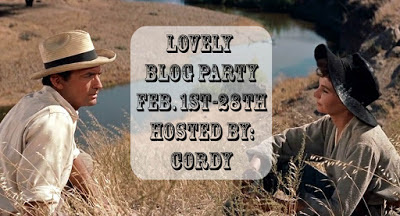 Cordy at Any Merry Little Thought is hosting her second Lovely Blog Party this month, a blog party dedicated to beautiful romances throughout fiction.  For this party, I hereby present you with my ten favorite romantic couples from western movies!  These are are couples whose love stories I swoon over, or cheer for, or simply never tire of.  Couples that I think have the chance to really, truly be able to live happily ever after.  Because if I don't feel like they're going to have a happy marriage, I'm not happy with a fictional couple being together at the end of a movie or book.  It's a thing.  Okay?  Okay.  Let's do this.

Titles linked to my reviews where applicable. 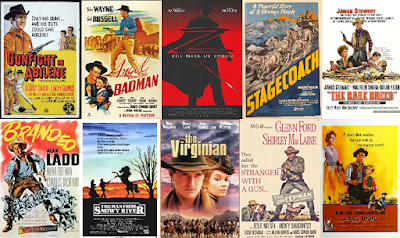 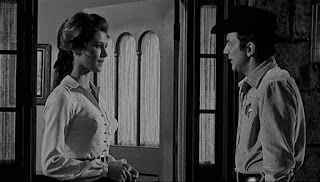 Cal and Amy were once planning to get married, but then he was reported dead during the Civil War, and she began seeing his best friend's older brother.  When Cal turns up very much alive, Amy must decide between her long-smoldering feelings for him or the security offered by her new fiance.  No prizes guessing which one *I* would choose.  I actually co-wrote a follow-up fanfic story for this movie once, which you can read here on fanfiction.net.  (It's posted under the name MountySwiss, the person I co-wrote it with.)(I wrote all the scenes with Cal Wayne in them, and she wrote the others.)(It does have some violence, but no bad language or sex.)(The story, I mean.  The same goes for the movie, actually.)(ANYWAY!) 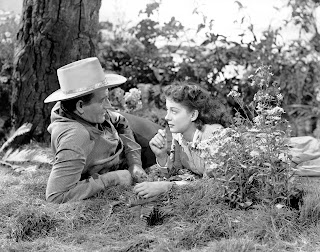 She might not quite be an angel, but then again, he's not quite a bad man either.  By learning from each other and both being willing to change and grow in order to live in the other person's world, they wind up becoming admirably suited to each other.  I think they have a beautiful life ahead. 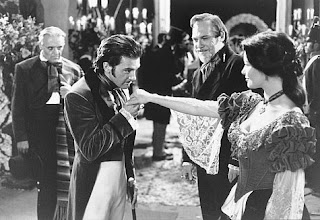 Elena is the daughter of landed, titled Spanish aristocrats.  Alejandro is an orphan who grew up ragged and scrabbling for existence.  But they're both passionate and principled, and when they learn to work together, they become unstoppable. 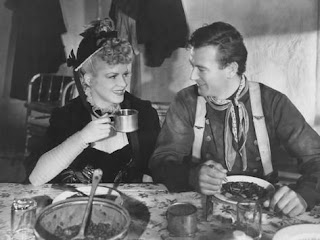 I've got a fondness for outcasts, and no mistake.  This former fallen woman and former convicted criminal will be mutually helpful in their quests to forge a better life by leaving their past selves behind. 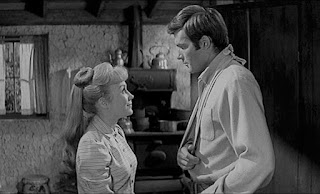 She's a young lady from Great Britain, travelling in America with her mother and the prize bull they've sold to a Texas rancher.  He's the rancher's neglected son, sweet and kind when his father wants him to be tough and rowdy.  They bring out the best in each other, and I think they're absolutely adorable together -- maybe the cutest couple on this list! 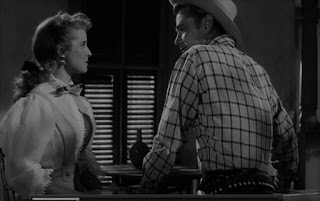 Choya and Ruth are both so stubborn that, once they put their minds toward being together instead of working against each other, they've got a bright future.  Even though they first met when he was trying to con her family by posing as her long-lost brother, once they clear up that little misunderstanding, things smooth out readily enough. 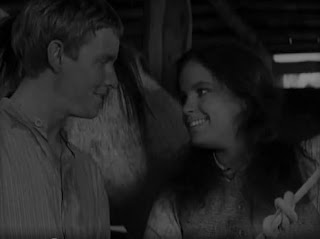 Probably this should be much higher on my list, since this is my favorite movie and all.  But sometimes I worry a little that Jim and Jessica will both be too stubborn and attached to their lifestyles to make a good go of things.  If they really want to, though, they can do it. 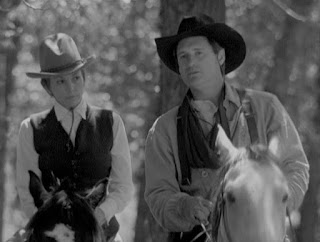 More stubborn people!  Being stubborn myself, I often gravitate toward people who are stubborn, tenacious, even a little bull-dogged.  Anyway, the Virginian spends most of the movie gently, determinedly pursuing the new schoolteacher from back East.  Molly Stark spends the movie insisting she won't marry a violent cowboy or some such fiddle-faddle and rot.  But I'm quite sure they'll be happy together, especially since he's so very patient.  She will require patience, I think. 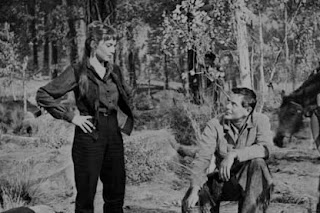 She's 24, he's 42, and you expect this to be a weird sort of awkward, but instead, they're adorable.  Much of the adorableness stems from the fact that they seem to have some kind of inside joke that causes them to work really hard not to laugh in just about every scene they share.  That mutual humor makes me think they're going to have a grand life together. 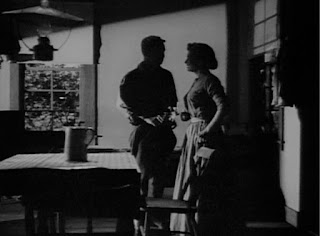 Both John and Linnett have big problems.  John's son (David Ladd) has been mute since his mother died.  Linnett is a single woman, not young, who owns a fine farm that some mean sheep ranchers want to get by any means necessary.  But they're both kind, good, honorable people and, together, they eventually find a way to make a better, happier life.


I hope you had fun with that!  Maybe even found a western movie or two you want to watch now :-)

PLEASE NOTE!  Most of these movies are NOT actually black-and-white.  All but #s 2 and 4 are color movies.  I just used b&w pictures of all of the couples because it was aesthetically pleasing.

If you want to see all my "ten favorite" lists, I have collected them on this page, with links to each individual post.
Posted by Hamlette (Rachel) at 8:39 AM