Yes, it's true.  I'm right in the middle of We Love Shakespeare Week, and I'm already talking about my next blogging event.

Today would have been Vic Morrow's 90th birthday.  To honor and remember him, I'm hereby announcing that DKoren of Sidewalk Crossings and I are cohosting a blogathon dedicated to Vic Morrow in April!  And we invite you to join us.  You can sign up here on my post or over on Sidewalk Crossings.

Vic Morrow has been one of my favorite actors since I was in my mid-teens.  He played my absolute favorite fictional character, Sergeant Saunders, on my favorite TV show, Combat! (1962-67).  He had an electrifying presence onscreen, and his acting abilities continue to astonish me.  Not only that, but I owe my friendship with DKoren in no small part to Vic Morrow -- I discovered her blog 14 years ago by searching for other bloggers who listed him as an interest.

If you're not sure you know who Vic Morrow is or what he acted in, here's a link to his page on imdb.com.  There you'll discover that he not only made movies with the likes of Glenn Ford, Sidney Poitier, Elvis, Robert Ryan, James Cagney, and Aldo Ray, he also guest-starred in oodles of TV shows throughout the 1960s and '70s.  Many of those TV show episodes can be viewed on YouTube or elsewhere on the internet.

He also starred on the TV show Combat! for five years, working with an illustrious string of guest stars like James Coburn, Lee Marvin, Charles Bronson, John Dehner, and James MacArthur.  Many actors specifically requested a guest slot on the show just so they could have the chance to work with Vic Morrow. 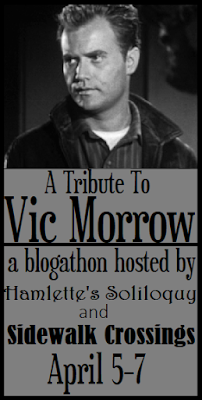 You are welcome to write a review of a single TV show episode for this blogathon, or review a movie, or write up anything else related to Vic Morrow that comes to mind.  If you're not sure if your idea will work, just discuss it with either myself or DKoren.

As usual, I've gotten very enthusiastic with creating buttons for this event.  Find one you like and share it on your blog or website -- there are plenty to choose from.