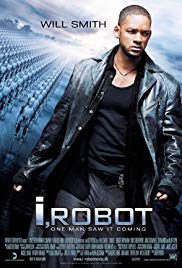 When I say that Will Smith is the best part of this movie, I don't mean that the rest of the movie is bad.  It's just that Smith is so doggone watchable and likable, he can't help being the best thing on the screen.  But I also dig this movie because it is smart and twisty, and especially because it has a reveal at the beginning of the third act that shifts everything in the best possible way.

It's the year 2035.  Robots are everywhere, serving humans.  Homicide detective Del Spooner (Will Smith) hates robots.  Fears robots.  Suspects robots of being up to no good basically all the time.  He won't let his grandmother (Adrian L. Ricard) get one to help her around the house.  He goes out of his way to be mean and ornery to robots, calling them slurs like "canner."  He gets in trouble with his boss for antagonizing and falsely suspecting robots of crimes.  But he refuses to trust robots, no matter how safe they're supposed to be.

This movie is probably the main reason that, when my husband wanted to get a robot vacuum, I insisted we get the least-sentient robot vacuum there is.  It can't turn on by itself, it can't recharge by itself, and it can't detect messes by itself.  I don't need any spooky sentient robots in my house, thanks.

Because, of course, Spooner is going to turn out to be right.  The robots are going to be too powerful, too pervasive.  There's going to be big trouble between robots and humans.

It all starts when Dr. Alfred Lanning (James Cromwell) falls to his death inside the headquarters of U.S. Robotics.  His successor, Lawrence Robertson (Bruce Greenwood), insists it must have been suicide.  He pushes to have the police investigation wrapped up quickly.  But Detective Spooner is suspicious.  He insists on poking around the facility, so Robertson assigns robot-psychology expert Susan Calvin (Bridget Moynahan) to show him around.

Together, they find a robot hiding in Dr. Lanning's office.  A robot that looks like all the rest of the latest generation of robots, called NS5s.  But this robot is different.  It has a name, it has dreams, and it's voiced by Alan Tudyk, who a decade later would also voice another of my favorite robots, K-2SO from Rogue One (2016).

This robot, dubbed Sonny by Dr. Lanning, bothers Detective Spooner deeply.  It was hiding at the scene, it then jumped out a window to elude capture when discovered, and it behaves emotionally.  So you'd think that the robot-hating detective would be thrilled when everyone agrees with Robertson that the robot must have killed Dr. Lanning and thus must be destroyed.

Except Spooner is convinced that there's something even more sinister than killer robots at work here.  He suspects Robertson of having used Sonny to kill Dr. Lanning so Robertson can take over US Robotics.  Spooner himself endures multiple robot attacks during the course of his investigation, but because the rest of the homicide bureau see him as paranoid about robots, his attacks are dismissed as simply ordinary events blown out of proportion by Spooner himself.

And then.  And then it gets REALLY GOOD because you finally find out the reason that Spooner hates robots.  And I refuse to spoil this part because it's the other main thing (besides Will Smith's natural charm) that makes me love this film.  I'll only say that it's a bit of a paradigm shift, with things you kind of assumed about Spooner twisting in a new direction that clarifies him for the viewers.

The villain turns out to be not who anyone suspected, and of course, Spooner and Calvin save the day, with some help from a new friend.

I, Robot is very, very loosely inspired by the Isaac Asimov short story collection of the same name.  It does involve robots, the Three Laws of robotics, and a character name or two.  That's about it.  I reviewed the book a couple years ago if you're interested in the source material.

Is this movie family friendly?  Not precisely.  It has a LOT of bad language.  A LOT, and of various flavors.  (If you watch it with the closed-captioning on, you'll find out it even has the F word once, but I totally never heard it when watching without captions).  It has some far-away, side-view nudity of Will Smith in the shower.  You also see Susan Calvin in the shower, but it's all steamed up, so you only see her bare shoulders.  There's nothing sexual in either of those scenes, and aside from a few mild bits of innuendo in dialog, there's no sexual content at all -- no kissing, no romance between Spooner and Calvin, nothing like that.  There's a lot of robot vs. human violence.  Dr. Lanning's dead body is shown with blood all around the head.  One character has memories of a child drowning, which could be disturbing.  If you watch this with something like ClearPlay to filter out the language, it could be pretty family friendly, though. 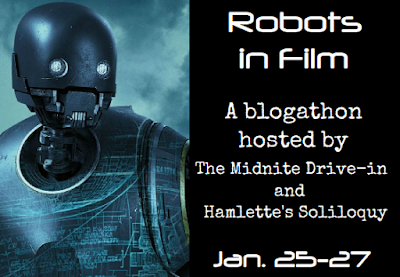 This has been my entry into the Robots in Film blogathon that Quiggy and I are hosting this weekend!  Check out the main posts on my blog or on Quiggy's to get links to all the other amazing robot-related reviews.
Posted by Hamlette (Rachel) at 6:51 AM