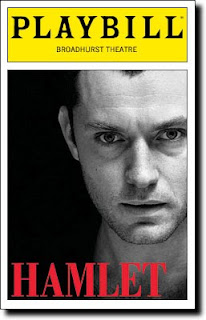 I have now seen Hamlet performed live. On Broadway, starring Jude Law, no less! It's been a dream of mine to see the play live ever since I fell in love with it, lo these twelve years ago. Cowboy had to go to NYC for work this past weekend, and Dano and I went along for the ride. One of Cowboy's coworkers is also a Shakespeare fan, so she and I decided we could not miss out on the chance to see this production.

I missed the first five minutes of the show, due to a stomach disturbance I blame on NYC food, but I was back in my seat before Hamlet himself wandered out on stage, so I wasn't too sad. Anyway...

The set was very austere, with tall stone walls on both sides, and a back wall that could be big wooden doors, or it could be open to the "outside" with a brick wall behind, or it could just be an interior wall. There were very few props, just a chair or bench now and then, and swords/daggers when needed, etc. -- quite minimalistic. 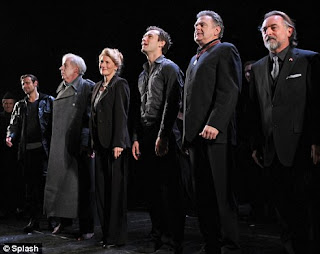 The costumes were modern, all blacks and greys, except during "The Murder of Gonzago" when the Players wore all white. The men wore expensive suits and ties, while Gertrude and Ophelia wore dresses -- most of the characters were attired similarly to the audience, in fact. Horatio was the rebel, always in biker boots and a black leather jacket, with long black hair slicked back into a queue. And Hamlet wore many shades of grey, very layered, and more casual on a whole. (In this pic, you see Horatio, The Ghost/First Player, Gertrude, Hamlet, Claudius, and Polonius taking a bow.) 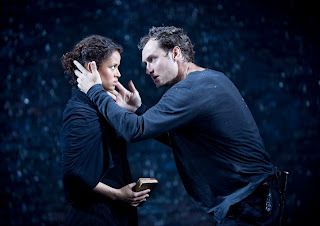 As for performances, Gertrude was sympathetic, and a strong woman, not a silly one. Claudius was excellent, and his closet soliloquy was heartfelt and compelling. Polonius was officious, but not unbearable. Ophelia was okay, though she was portrayed as timid and pliable. Laertes was acceptable. They went the rash, young, headstrong route, which is not my favorite interpretation. He was sweet to Ophelia, but lacked that brotherly protectiveness I always look for. But I'm hugely picky about my Laertes, and only Liev Schreiber has ever played him to my complete satisfaction (so far), so I wasn't too disappointed.

Horatio. Ahhh, Horatio. Not only was he hot, he was good. This Horatio was the best friend Hamlet totally needs -- strong, resilient, quiet, and completely devoted. He seemed to exude an aura of "I'm here, don't worry," and also a sense of protectiveness. And his "Now cracks a noble heart" brought me to tears, it was so heartwrenching. He had a great voice too, deep and just a little husky. Reminded me a lot of a young Cary Elwes, with his movements and body language, anyway. He'd make a wonderful Dread Pirate Roberts.

And then, there was Hamlet. I'm not a big Jude Law fan -- I like him okay, but I don't seek out his movies. But he CAN act. No question. His Hamlet was confused, melancholy, jumpy, and so very tired of this whole mess. He did several scenes barefoot, which pleased me no end; it seems when he put on his antic disposition, he took off his shoes. And he made me cry twice, with his "Rogue and peasant slave" soliloquy (which he got clapping and cheers for, and rightly so, as it was probably his best moment) and his "If it be now" speech, which is not a place I usually choke up. He was just soooo tired of it all and ready to die if need be, so at peace with his fate after railing against it for so long... I loved it. Excellent portrayal overall.

I really liked the way they staged the first part of the bedchamber scene between Hamlet and Gertrude. A big, white, sheer curtain dropped down parallel to the backdrop, and Polonius hid behind it on the audience's side, while Hamlet and Gertrude were behind it, where they were still visible, but not perfectly. It reenforced the fact that we, the audience, are all eaves-dropping on the play, which rocked. When Hamlet stabbed Polonius, then the curtain fell down over him and we could see the whole stage again.

And I adored all of the soliloquies -- Hamlet broke the 4th wall every time and addressed us as if confiding his innermost self to a diary or bosom friend. The overall effect, for me, was to make me want to run down to the stage, throw my arms around him, and promise that everything would be all right. It was intensely personal and awesome. 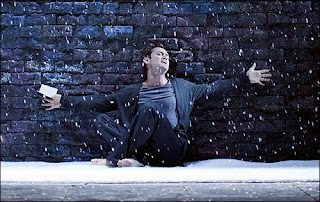 The "To be or not to be" soliloquy was probably the least personal of all -- Hamlet came onstage "outside," with snow falling around him and blanketing the ground. He was still barefoot, and did most of that speech far away from the audience, only coming closer toward the end of it. A very meditative reading, and quite delicious.

And the end was perfect. Hamlet died in Horatio's arms, with Horatio sitting on the floor, one knee up to support Hamlet a little, who died with his back to Horatio's chest. After "Now cracks a noble heart," Horatio kissed him on the forehead, very reminiscent of the death of Boromir in LOTR. And then Horatio stayed there, cradling him, through the rest of the scene. He looked very much the steadfast, protective, broken-hearted friend to the end. He would periodically smooth Hamlet's hair, or lay his cheek on Hamlet's forehead, and remained very focused on him, only paying Fortinbras the barest attention. Perfect. I was bawling.

I would say Jude Law combined Mel Gibson's almost reckless energy and drive with Richard Burton's weary snarl, if I had to compare him to performances I've seen on dvd. The cast on a whole was excellent, and I'm so glad this was my first live Hamlet. Bravo. My only regret is that I'll probably never get to see it again, as it closes in December.
Posted by Hamlette (Rachel) at 8:17 PM