Day 01 - A show that should never have been canceled

Easy. Firefly.  They canceled it before it really got started.

Sure, I'd love to have had another season of Angel -- it had just refound its stride when it was canceled.  And sure, I'd love more Nero Wolfe adventures.  But Firefly didn't even get to finish its first season, and that is a crying shame. 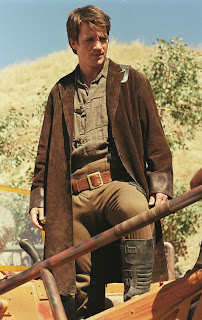 This is such a shiny show, what there is of it.  I didn't watch it in its initial run, so I myself am partly to blame for its cancellation.  Firefly aired the first year Cowboy and I were married.  He was finishing college, I was working my first full-time job, and I was already addicted to Joss's other two shows, Buffy the Vampire Slayer and Angel.  I didn't think I had time for another show, didn't really know what Firefly was about, didn't give it even one chance.

Then the Firefly 'verse came to the big screen in 2005 with the movie Serenity.  My brother-in-law, Noumenon, asked if I wanted to go see it with him.  I love going to the movies, and it's rare I get to see one with another person, so I said sure, anything to support Joss Whedon.  I loved the concept, the characters, the writing -- instant fan.  (You can read about my initial impressions here.)  But, clearly, a show that is literally about cowboys in space was just too oddball for the network execs, and they pulled the plug.  Evil, silly, annoying execs.  Grr.  Arrgh.