Day 11 - A show that disappointed you 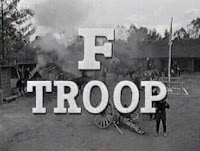 When I was a kid, my dad would tell us about two shows from his childhood that had been absolutely hilarious:  Hogan's Heroes and F-Troop.  He'd describe what bits and pieces he could remember, long-standing jokes, funny character foibles, whatever.  Johnnycake and I wanted so badly to see those two shows, because they sounded amazing.

When I was in high school, some cable channel at my grandparents' started showing Hogan's Heroes and we got to watch some over the summer.  And sure enough, they were awesome!  Funny, smart, and silly -- what's not to love?

So I had high hopes for F-Troop.  When it came to DVD and our library in WI got the first season, I eagerly checked out the first couple discs.  And was bitterly disappointed.  Maybe it gets better after those initial eps, but I found it silly, pointless drivel.  Maybe it's because I'm acquainted with good Western comedies like Support Your Local Sheriff and Texas Across the River and Cat Ballou.  Or maybe it's just not as great as my imagination and my dad's memory had built it up to be.  Whatever the case is, it disappointed me.
Posted by Hamlette (Rachel) at 8:17 PM