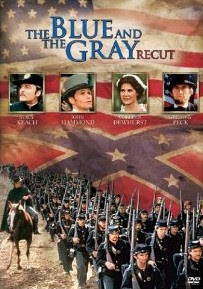 The Blue and the Gray (1982).  This is another one I grew up with -- my parents rented it several times when I was a kid, and for years, whenever I thought or read about the American Civil War, images from this series were the first to come to my mind.  Although it's pretty long and would take my family a couple days to get through, I always wanted to watch just a little more.

The Blue and the Gray centers around a young artist named John Geyser (John Hammond), who grows up on a Virginia farm along with three brothers and one sister.  John leaves home to work as an artistic correspondent for his uncle's newspaper in the North, where he gets to attend the trial and execution of John Brown (Sterling Hayden).  While he's home on a visit, one of his friends, a former slave named Jonathan Henry (Paul Winfield), is lynched for harboring runaway slaves.  John Geyser renounces his Southern ties, breaks with his parents (Lloyd Bridges and Colleen Dewhurst), and leaves home for good.

John keeps doing dispatch art for his uncle, and keeps meeting up with my favorite character, a mysterious man named Jonas Steele (Stacy Keach).  Jonas is in the Secret Service, sorta.  As the Civil War erupts, John's brothers enlist in the Confederate Army, while the cousins he now lives with enlist in the Union Army.  John falls in love with a lovely nurse named Kathy (Kathleen Beller), whom he rescues during the first battle of Manassas.  Kathy's dad is a senator (Robert Vaughn) who doesn't think John's a suitable match for his daughter, but of course that doesn't really bother John and Kathy, being very modern young people.  Meanwhile, Jonas Steele falls in love with John's cousin Mary (Julia Duffy).

The war rages on around John and Jonas, various other characters die, and before the war ends, both John and Jonas go a little crazy in their own ways, but survive.  And John gets to draw the portrait of President Lincoln (Gregory Peck, to me the best Lincoln ever).  The war ends, and John eventually reconciles with what's left of his family.

Andrew V. McLaglen directed the whole miniseries.  According to imdb.com, it was originally more than 6 hours long, but all you can get on DVD is a recut version that's about 5 hours long.  I saw it many times on VHS, and I honestly can't tell what they cut out, and, so either it was recut for VHS also, or what they cut out was entirely unmemorable.  If you like Civil War movies, family dramas, and epics that follow around a couple characters and watch them change (what Deb Koren calls my Rambley Movies), you'll dig it.  I like it better than North & South -- it's less soap-opera-esque, for one thing .  And Stacy Keach more than makes up for the absence of Patrick Swayze, in my opinion.
Posted by Hamlette (Rachel) at 8:58 AM