Day 04 - Your favorite show ever

If you've read this blog at all, you know what I'll be writing about today:  Combat!

Mmmm.  Combat!  What a show.  From the first time I watched an ep, at the tender age of 14, I have loved and adored Combat!  I even co-maintain a fansite for it, Fruit Salad, where Deborah Koren and I share our fanfiction, screencaps, my humorous ep reviews, and various other (often "hidden") goodies.  I wouldn't pour that kind of time and effort into just any show, so what makes Combat! so special?


Partly, it came into my life at the perfect time.  I was 14, just beginning to grow up, and starting to recognize good writing and acting from bad.  It was 1994, the fiftieth anniversary of D-Day, and all kinds of classic war movies were being released on video.  My dad loves war movies, so we watched quite a few of them that year.  And then, Combat! came into my life, one of many old shows on a brand new channel starting up, TV-55.  My dad remembered it from his childhood, we recorded some episodes, and from then on, it's been an important part of my life.  A year or so later, I started writing seriously, and one of the first stories I wrote was, technically, Combat! fanfiction, though I didn't yet know such a thing as fanfic existed. 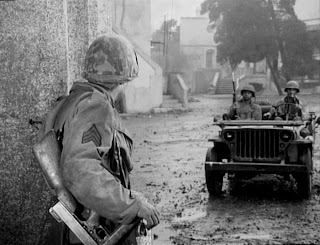 Partly, it's the setting.  I'm a history buff -- I love learning about WWII and the 1940s, and that makes this show right up my alley.  I also love heroes.  Combat! is about heroes, the real, dirt and grime and daily grind kind of heroes.


Then there's the writing.  This show has some of the best doggone episodes I've ever seen in any show.  It grapples with serious, deep, sensitive subjects.  Betrayal, revenge, justice, mercy, fear, courage, love, hate, kindness, cruelty, good, evil -- it's all here.  Combat! introduces us to cowards, murderers, musicians, artists, grocery clerks, shoe salesmen, writers, every kind of character you can imagine.  And it does all this in just 152 episodes.


There's also the acting.  The main cast members are all superb:  Vic Morrow, Rick Jason, Pierre Jalbert, Jack Hogan, Dick Peabody, Conlan Carter, and Tom Lowell.  They're supported with a truly impressive list of talented guest stars.  Actors and actresses like James Coburn, Lee Marvin, Charles Bronson, Eddie Albert, Mickey Rooney, Nina Foch, Leonard Nimoy, James Caan, Beau Bridges, Roddy McDowell, Sal Mineo, Frankie Avalon, Robert Duvall, James MacArthur, Joan Hackett -- I could keep going, but you get my point.  Some of these pros even requested to be on Combat! because they knew it was such a swell show.


But most important for me are the characters.  The main ones are all great, but from my first episode, my heart has belonged to Sgt. Saunders.  He's played by Vic Morrow with a depth of feeling and understanding I have never seen equaled in a mere TV show.  He transcends the stereotype of Hero.  He's brave, but also fearful.  He's noble, but also human.  He's intelligent, but also fallible. He's compassionate, but also uncompromising.  In other words, he's the kind of complex character I'm still trying to learn to write.  He's so multifaceted, he feels real to me, and I sometimes forget he's fictional.


So.  I love the setting, the writing, the acting, the characters. For sixteen years, my pulse has quickened every time I hear the familiar duh duh-duh-duh duh-duh rhythm.  I don't expect to lose interest any time soon.