My love for westerns and my enamoration with Texas are so tangled up together, I don't know where one begins and the other ends.  Texas has a mystique that has long enchanted me.  How long?  So long, I can't remember a time when I didn't wish I had been born there.

So here are my ten favorite movies that take place (at least partly) in Texas.  Astonishingly enough, two of them aren't even really westerns!  As usual, if I've already reviewed a movie, I'll link the title to my review. 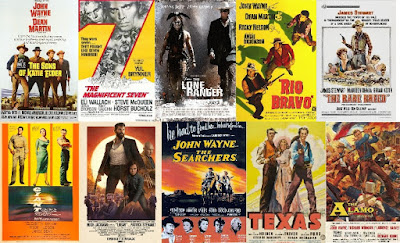 1. The Sons of Katie Elder (1965) Four brothers (including John Wayne and Dean Martin) reunite at their mother's funeral and work together to find out how their parents lost their ranch. My favorite John Wayne movie!

2. The Magnificent Seven (1960) Poor Mexican villagers hire seven gunfighters to defend them from the bandit who's been oppressing them for years. Steve McQueen, Yul Brenner, Charles Bronson, James Coburn... magnificent, indeed!  (This starts off in Texas, and Texas gets mentioned several times, but the bulk of it takes place in Mexico.)

3. The Lone Ranger (2013) John Reid (Armie Hammer) returns to his Texas hometown after years away at law school.  Bad guys ambush him, his brother, and a company of Rangers -- everyone else dies, but a renegade named Tonto (Johnny Depp) saves John Reid's life, and together they try to bring down the greedy men responsible for the deaths of their family members.  It's a twisty, fable-like origin story that I never tire of.

5. The Rare Breed (1966) A British widow and her daughter accompany the prize bull they've sold on its way to its new home in Texas, convinced it will revolutionize the cattle industry. James Stewart, Maureen O'Hara, Brian Keith, Don Galloway, and Juliet Mills -- their characters are like my dear friends.

6. Giant (1956) A spoiled East Coast beauty (Elizabeth Taylor) marries a stubborn Texas rancher (Rock Hudson), and they spend twenty-five years trying to figure each other out. One of the first movies I can remember seeing, and my favorite James Dean movie.

7. Logan (2017) An aging, angry Wolverine/Logan (Hugh Jackman) tries to save his dying mentor (Patrick Stewart) and a young mutant (Dafne Keen) with striking similarities to himself by shepherding them across the country.  It's a poignant, aching meditation on loss, aging, generational gaps, family, and love.  But also brutally violent.  (This one also only takes place partly in Texas.)

8. The Searchers (1956) Bitter, angry Ethan Edwards (John Wayne) spends years and years searching for his niece (Natalie Wood), who was kidnapped by Indians as a child. He intends to kill her to end her shame and misery from being forced to marry an Indian. Probably John Wayne's finest performance. Even if you don't like westerns, you should see this once because it's a masterpiece.

9. Texas (1941) Two young Civil War veterans (Glenn Ford and William Holden) have a series of adventures in Texas as they try to make their way in the world, one of them on the right side of the law and one on the wrong.  It's a romp with a few serious parts.

10. The Alamo (1960) Based on true events, of course, with lots of famous actors playing the roles of real-life heroes like Davy Crockett (John Wayne), James Bowie (Richard Widmark), and William Travis (Laurence Harvey).  It's sad, of course, but also glorious. 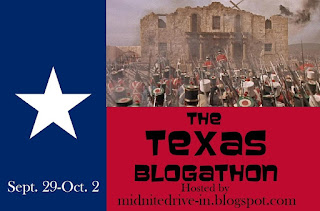 This is my first contribution to the Texas Blogathon hosted by The Midnite Drive-In this weekend.  Tomorrow, I'll be back with a movie review!
Posted by Hamlette (Rachel) at 12:22 PM