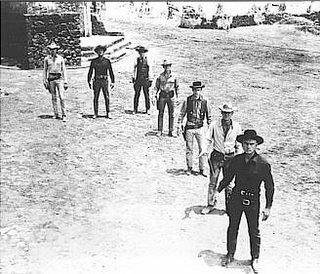 So I just finished watching The Magnificent Seven with one of the commentary tracks, the one with Eli Wallach (Calvera), James Coburn (Britt), Walter Mirisch (Producer), and Robert Relyea (Assistant Director). I was a little disappointed. Not that they didn't all have really fascinating stuff to talk about, because they did. But they either had Eli Wallach's microphone on wrong, or else something is screwed up with my copy or the way they recorded. Because I had to crank my volume waaaaaaaaaaaaaaaaaaaaay up to hear anything Wallach said, and then I'd have to quick turn it down again when one of the others would say something. Very annoying. Anyone else watched the commentary for this movie and had the same problem? Maybe I should see if the library has it and if their copy is the same, or if I just got a messed-up disc.

Anyway, I do adore this movie. And it was awesome hearing about how it was made, little memories and funny stories about the production, and about other things these guys worked on as well. Eli Wallach said that the reason Sergio Leone cast him in The Good, The Bad, and the Ugly was because of the little shot in How the West Was Won where he pretends to shoot the two little kids by pointing his finger at them and going "pkew pkew". Also, Wallach tried to play Calvera, and any other heavy he played, not as a bad guy per say, but as a guy trying to make a living, just doing things in a way that the "good guys" disagreed with. And really, isn't Calvera the most loveable bad guy? You really kinda feel bad when he gets killed. Also, one of the coolest things James Coburn pointed out was the fact that his character only has eleven lines in the whole movie. He has scads of scenes, but only eleven lines! I didn't count them this time around, but I'll try next time I watch it.

Anyway, the other extras I've watched so far have been marvelous, so if this sound thing is the only glitch I find in this whole 2-disc set, oh well, it ain't gonna break my heart.
Posted by Rachel Kovaciny at 7:17 AM