Okay, so before we get started, I need to make very clear that Texas Across the River is not only an extraordinarily silly spoof of a movie, but it's also a product of its times.  By which I mean it's not politically correct in the slightest.  It makes fun of Native Americans, Europeans, Texans, the US Cavalry, men, women, and cattle.  It doesn't poke fun at horses, though.  I mean, you have to draw the line somewhere, right?

The opening credits make it very plain that this is NOT going to be a serious movie.  Or a movie you can take seriously.  But it's going to be a lot of rootin'-tootin' fun.

It all begins at a plantation outside Shreveport, Louisiana, in 1845.

Phoebe Ann (Rosemary Forsyth) is about to be married.

Her husband to be is Don Andrea Balthazar (Alain Delon), a Spanish nobleman prone to kissing people on both cheeks when he's happy.  This doesn't go down so well with his future father-in-law, or many other people.  Guys in particular get very touchy about it.

While the wedding march begins, two cavalry officers burst in.

The bride and her bridesmaids are appalled.

Why are the cavalry here?  One of them is a guy named Yancy (Stuart Anderson) who insists Phoebe Ann is engaged to him.  He drags her upstairs to her room and forces kisses on her.

Don Andrea comes to her rescue and challenges Yancy to a due.

Yancy loses.  And I'm not a bit sorry, because yeah, he was creepy.  Unfortunately, the other cavalry boys there are his cousins, and they vow to avenge Yancy's death by hanging Don Andrea.  The death was accidental, but they don't care.

Phoebe Ann convinces Don Andrea to flee across the river to Texas, where she will find him.  She's sure that will be easy because, as she says, "Texas isn't even a state -- how big could it be?"

Meanwhile, at a little town on the Louisiana side of the river, a Texan named Sam Hollis (Dean Martin) has a problem.

He also has a Native American sidekick named Kronk, who is played by Joey Bishop, who isn't remotely Native (Polish-Jewish, actually).  If this is going to bother you, don't watch this movie.

Sam Hollis and Kronk are trying to take a load of guns to some settlers in Moccasin Flats, Texas, but they have to cross Comanche territory to get them there.  So they want a military escort.  But the cavalry won't accompany them because Texas isn't part of the US.  Also because the two guys in charge (Peter Graves and Andrew Prine) are Yancy's cousins and more interested in chasing his "murderer" than doing anything else.

Speaking of whom, Don Andrea arrives in town, looking for a way to get to Texas.

Sam Hollis and Kronk discover Don Andrea is a great shot and trick him into accompanying them to Texas.

Sam Hollis spends a lot of time being confused by Don Andrea's behavior.

Finally, Don Andrea confesses that he's wanted for murder.  Sam knows this, but he pretends to be shocked.

Don Andrea almost shoots Kronk, who hides under his horse.  Kronk is quite silly, but also more level-headed and intelligent than either Don Andrea or Sam Hollis.  If this is going to bother you, don't watch this movie.

The trio try riding at night and sleeping during the day to avoid getting caught by Comanche warriors.  But the first morning they try to get some rest, Sam and Kronk are disturbed by Don Andrea shouting.

Thinking he's been attacked by Comanche, they run over to rescue him, but are puzzled by what they see.

The double-takes and reaction shots from Dean Martin and Joey Bishop are priceless all throughout this movie.  I could have filled this whole post with them, but I didn't.  Shocking, I know.

Okay, so it turns out there really are some Comanche warriors skulking around, trying to steal the guns and shoot the three heroes.  But they're part of an incredibly inept band of warriors.  While watching this with my kids this past week, I tried to figure out why I'm not bothered by this portrayal of Native Americans, and I think it's because it's not pretending to be factual in any way.  This whole movie is just meant to be silly and funny, and everyone making it knows it.  It's poking fun at western movie tropes, but not at any group of people.

Okay, back to the plot.  Don Andrea discovers that Sam and Kronk totally know who he is and tricked him into coming with them.  He slaps Sam's face to challenge him to a duel.

That goes on for a while, until our attention is diverted by a Comanche Medicine Man (Richard Farnsworth.  I kid you not) who's performing a death ceremony involving a young woman named Lonetta (Tina Aumont billed as Tina Marquand).

Our heroes look on, appalled.

The ceremony involves two rattlesnakes and a whole lot of yelling and chanting.

Don Andrea, as I have said, is an honorable man.  He rushes down to save the girl.  Kronk and Sam are sympathetic, but unhelpful.

Don Andrea saves the girl, but gets bitten by a snake in the process.  Sam goes about that time-honored movie tradition of cutting open the snake bite so he can suck out the venom, which he does not really want to do at all.

Lonetta ends up helping.  She's clearly smitten by Don Andrea (because, honestly, who wouldn't be?).  The two of them continue on toward Moccasin Flats while Sam and Kronk go find their herd of cattle that some other folks are bringing there.

Guess who else is interested in that cattle herd-slash-wagon train?

This is Iron Jacket (Michael Ansara -- also not a Native American.  He was Syrian, I believe), a Comanche chief.

Meanwhile, remember that chick from the beginning, Phoebe Ann?  She's come along with that wagon train-slash-cattle drive to find Don Andrea in Texas.  But right now she's taking a swim and washing her hair.  And the chief's son has just sneaked up on her -- you can see his reflection in the pool.  She could too, if she was paying attention.  But I've got to admit that Phoebe Ann is not the sharpest rowel on the spur.  If this is going to bother you, don't watch this movie.

She has zero idea Yellow Knife (Linden Chiles -- also not a Native American as far as I know) is there.

But Yellow Knife is very aware of her.

Before he can do more than steal her dress, Sam Hollis arrives, there to shepherd Phoebe Ann back to the wagons so they can skedaddle.  He finds her very annoying.

She returns the sentiment.  (Also, that's the most skin we see from her, I promise.)

Because her dress is gone, Sam cuts a hole in his own blanket so she can get out of the pond decently.  She is not even the least bit grateful.

Yellow Knife heads back to find his dad, who is quite disgusted with his son's latest mishaps.

Oh, the Medicine Man is trailing Don Andrea and Lonetta.  I'm still tripping over the fact that he's played by the same guy who would eventually play Matthew Cuthbert in Anne of Green Gables (1985).  Richard Farnsworth started out as a stuntman, though, which makes the role make sense, as he has to do a lot of horse riding and a couple stunts.

Sam Hollis tries to get acquainted with Phoebe Ann too.  And gets his face slapped.

Kronk makes this face.  You're welcome.

Don Andrea and Lonetta finally reach Moccasin Flats.  Not much of a town -- keeps production costs down, you know.

Yellow Knife tries to recapture Lonetta or something... anyway, he challenges Don Andrea to a fight.  You can see how well that goes.  Also, he's now wearing Phoebe Ann's dress as a cape.  Because why not.

Yellow Knife gets bonked on the head during the fight.  What's better than Alain Delon in a western?  TWO Alain Delons, of course!

Yellow Knife fights just as well as he does everything else.

The rest of Iron Jacket's warriors are used to this.

Six Alain Delons might be just a bit much.  Yellow Knife retreats.

Iron Jacket is thoroughly ashamed of his son's ineptitude and suggests a less-than-honorable end for Don Andrea, who is leaving.

Before Don Andrea can leave, who comes upon the scene but Sam Hollis!

As Sam mounts up after yelling at Don Andrea for a while, this happens:

Yeah, he's making that face because Yellow Knife shoots just as well as he fights.

Poor Sam salvages what dignity he can and rides off in a peculiar way.  Which really can't have been easy to do, and Dean Martin was almost 50 at this time, so hey, good riding there, Dino.

Sam decides to pretend he's been grievously wounded to get sympathy from Phoebe Ann.

But eventually, Don Andrea goes back to town, where he finds Phoebe Ann nursing Sam Hollis back to health.  Sam suddenly gets better.  Don Andrea gets jealous.  Phoebe Ann gets disgusted with both of them.

When Lonetta and Phoebe Ann meet, they consider drawing some blood themselves.

And Iron Jacket returns with all his warriors to avenge his son's disgrace or something.

A battle between settlers and natives ensues.

And then, after the smoke and dust clears, Sam Hollis and Don Andrea can finally have their duel.  Only they have a big argument over how to do it.  Don Andrea wants to stand back-to-back, walk ten paces, turn and fire.  Sam Hollis insists they have to go to opposite ends of town and march toward each other.

Lonetta and Phoebe Ann think they're both ridiculous.  But they worry that one or both of them might get killed.

Sam gets ready for the showdown.

Don Andrea gets ready for the showdown.

But, in the end, neither of them shoots the other.  And everyone ends up covered in oil because Andrew Prine strikes a gusher while digging a grave for whoever loses the duel.

Because what's a movie about Texas without a bunch of people covered in oil, right?

Um, yes.  Utterly ridiculous movie.  I showed it to my kids this past week for the first time, and they were laughing so hard that we had to back it up several times to hear dialog we missed because of all the laughing.  So it definitely appeals to the sensibilities of 5- and 7- and 9-year-olds.

Is it family friendly?  Well, I did let my family watch it.  There are two cusswords at the very beginning, a lot of shooting with no bloodshed shown, and some mild innuendo (Phoebe Ann swimming naked, Sam Hollis taking an unseen liberty with her and getting his face slapped, and snide remarks about how Don Andrea and Lonetta were alone with each other for several days and nights). 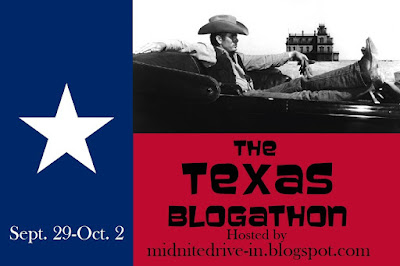 This was my second contribution to the Texas Blogathon hosted by the Midnite Drive-In.  Adios!
Posted by Hamlette (Rachel) at 10:54 PM