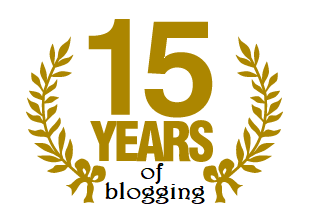 Well, how cool is this?  Today is my 15th anniversary as a blogger.  Fifteen years ago, waaaaay on back in 2002, I decided to try starting my own blog.  This very blog you're reading now, Hamlette's Soliloquy.  I've called it that since day one.

Back in 2002, blogs were kind of a new thing.  I read about them in a newspaper one day at work and decided it might be fun to have an online place where I could share my thoughts and random things I wrote.  I'd been out of college for five months and married for four, and at the ripe old age of twenty-two, I was convinced I had lots of stuff to say that people would want to read.

But truth be told, I had about ten readers and knew most of them personally.  In fact, for about ten years, I really didn't interact with a lot of other bloggers on any kind of a regular basis, DKoren excepted.  But in 2012, I started to read a lot more blogs, and in 2013, I joined two blogging events that really got me out into the blogging world.  The first was the Period Drama Challenge hosted by Old-Fashioned Charm. The second was the Literary Heroine Blog Party hosted by Accordion to Kellie.  Those two events introduced me to so many wonderful bloggers!  And from then on, I was a much more social blogger :-) 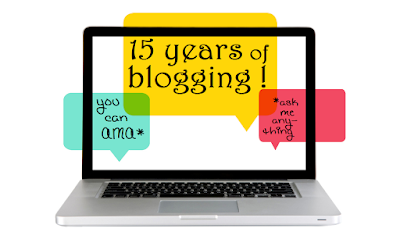 Now, the title of this post says "Ask Me Anything," so... ask me anything!  Within reason, of course ;-)  I mean, if you ask me for the air speed velocity of an unladen swallow, I probably won't have a great answer for you.  But you probably know how AMAs work, right?

And actually... depending on the questions I get and how much time I have (and if I can get it to work), I might try my hand at something new!  Like... a vlog post.  A very short one.  Maybe.  We'll see.
Posted by Hamlette (Rachel) at 4:50 PM