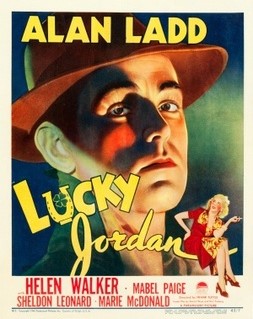 When Alan Ladd made a big splash with This Gun for Hire (1942), Paramount quickly put him in two similar roles to capitalize on his new popularity.  Both of his next vehicles featured him in the tough-guy-with-a-buried-conscience sort of character that made him popular.  First came The Glass Key (1942), another film noir that paired him again with Veronica Lake, his co-star from Gun.  Then came Lucky Jordan (1942), a much lighter film that gave Ladd his first truly leading role, though with a put-the-war-effort-above-your-own-needs vibe similar to Gun.

Lucky Jordan (Alan Ladd) runs a successful gambling racket in New York City.  When he gets drafted, he's confident his lawyer (Lloyd Corrigan) will be able to finagle him out of having to serve in the military.  The lawyer tries everything.  He even attempts to have Lucky designated "socially undesirable," which Lucky resents.  "Whaddaya mean, socially undesirable?  Dames like me," he insists. 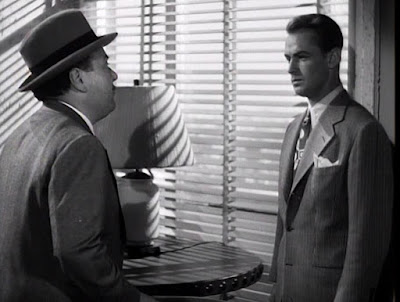 But nothing works.  So Lucky tells his lawyer to go hire some old lady to pretend she's his mother so Lucky, an orphan and unmarried, can claim he has a dependent and dodge the draft that way.  The lawyer turns up Annie (Mabel Paige), a grifting alcoholic who bums quarters off rich men to keep herself supplied with liquor.  She says for fifty bucks she'd "do a swan dive off the Statue of Liberty." 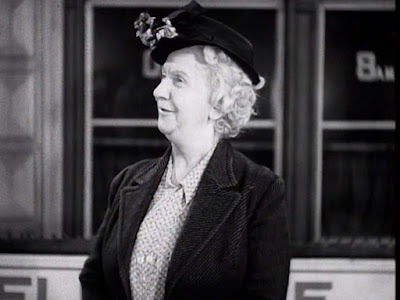 Lucky is unimpressed by Annie, but figures this is worth a shot.  But he overplays his hand, telling the draft board he gives his "ma" a thousand dollars a month.  They say if he can afford to be so generous, surely he has enough money to support her while he's in the army.  So into the Army Lucky goes.

Now comes the first time the movie surprised me.  I expected Lucky would get to basic training, a drill sergeant would yell at him a lot, and Lucky would gradually learn to work with other people and become a "good" soldier. 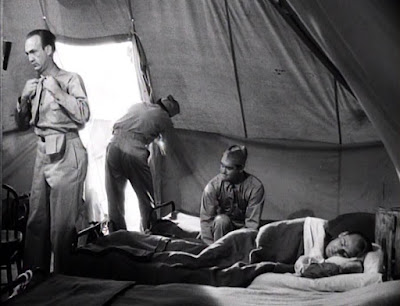 Not so much.  Lucky wears his silk pajamas in his tent.  When an officer comes in and yells at him, he yells back. 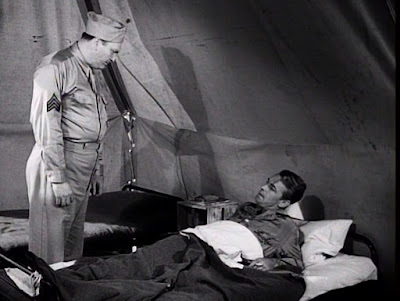 He ducks every bit of training and duty, spending his time in the camp canteen reading magazines, eating popcorn, and ogling the WACs who work there. 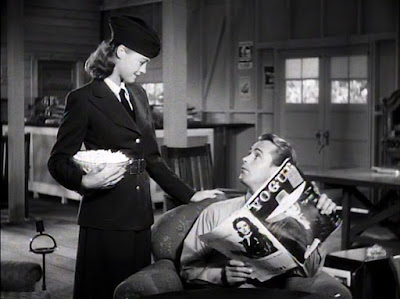 Then one day, his "ma" shows up, looking for some more money. 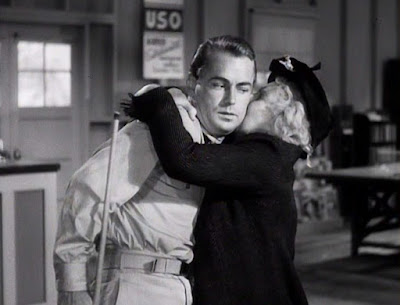 Lucky gets mad and doesn't treat her the way a good son would, which makes WAC Jill Evans (Helen Walker) get wise to the fact he's not everything he seems. 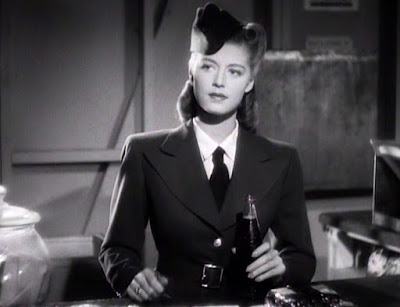 This was Walker's first film, and both she and Ladd feel a little uncertain at times, both still figuring out how to carry a movie.  While Ladd had been acting in bit parts and supporting roles for ten years by then, this was really his first leading role -- both This Gun for Hire and The Glass Key rested on the shoulders of other actors.  Walker and Ladd don't have much chemistry, but it's okay because they spend most of the movie yelling at each other anyway.  The character of Jill Evans is fairly flat, mostly there as a plot device, and Walker doesn't round her out much with her performance.  Lucky Jordan's not a very filled-out character either, but Ladd's got enough acting experience (and talent, I must loyally add) to make Lucky Jordan feel fairly real and interesting. 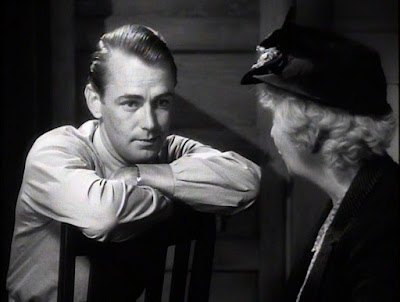 Anyway, Lucky lands in the stockade, escapes, sort-of kidnaps Jill Evans (and insists on calling her character "Cute Eyes" through the rest of the film, which Cowboy is now threatening to call me), and makes his way back to his office in NYC.  There he discovers that his head lackey, Slip Moran (Sheldon Leonard), is trying to take over Lucky's business. 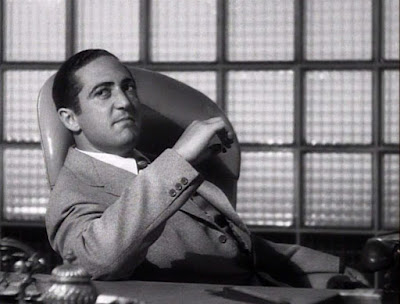 Then it all devolves into this who-can-get-the-McGuffin-first story.  Moran wants to sell some American tank plans to the Germans.  Lucky stops him, not because he objects to selling American secrets to the enemy, but because he wants to sell them himself and stop Moran from muscling in on his business.  Jill Evans keeps trying to convince Lucky to be a Good Guy and give the plans back, but he's got zero time for those ideas. 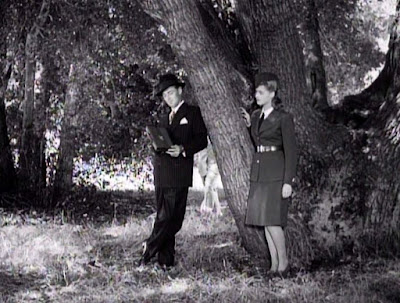 Moran puts out a hit on Lucky, but remember Annie, the old lady who pretended she was Lucky's mother?  She warns Lucky, then hides him in her own shabby apartment.  And their scenes together in that apartment are my favorite part of the whole movie.  Ladd and Evans might seem a bit flat in their scenes together, but Ladd and Mabel Paige shine in their every interaction.  They make me laugh, make me tear up a little -- by the time Lucky leaves her to go stop the bad guys, I am totally invested in their characters.  I think the movie as a whole is worth watching just for their scenes together.

In fact, they're so cute, I made a GIF of her cracking Alan up.

So, yeah, Lucky decides to do the right thing and stop the bad guys from getting their hands on those tank plans.  And he does, after many thrilling heroics. 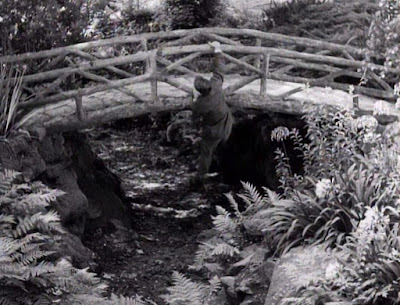 And this is where the movie surprised me a second time.  Jill Evans tells Lucky that, although he has to go back to the army, he's probably going to be rewarded for saving those plans from the enemy.  He might even get a medal.  But he doesn't.  He winds up in the stockade again, and in the very last scene is still the same unrepentant wise-guy he was at the beginning.  Which a little bit undermines Lucky's character arc (though he did still learn to care about someone other than himself, namely his "ma"), but man, it just makes me laugh with delight when he mouths off to his guard one more time. 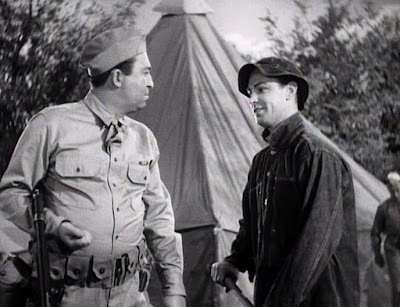 The filmmakers clearly wanted this to be a sort of Damon Runyon story, with characters taking themselves ultra-seriously while the audience laughs at them.  It's even set in Runyon's turf, NYC, with the same mix of seedy, greedy, kindly, and upright characters he would have used.  But it lacks the true Runyon charm.  Still, it's a fun  movie that provides several laughs, and like I said, the scenes between Lucky and his "ma" are worth the price of admission all on their own.

This is my second entry for the Alan Ladd Blogathon I'm hosting this weekend.  Check out the main post here to find links to other people's entries for this event. 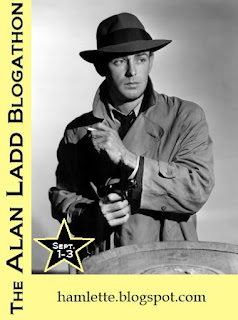