Happy birthday, Alan Ladd!  Today you would have been 104.

To celebrate, I shall list off my ten favorite movies Alan made.  This list may change in a year or two when I've seen even more of his movies, but for now, these are my top ten.  All titles are linked to my reviews. 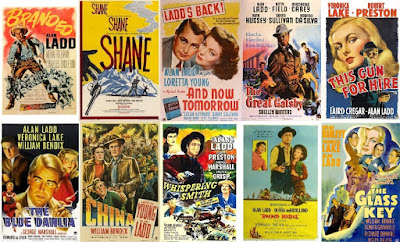 1.  Branded (1950)  A conman (Robert Keith) persuades a drifting loner (Alan Ladd) to impersonate the long-lost son of a wealthy rancher (Charles Bickford) to acquire his fortune.  But the drifter comes to care about the family and sets out to find their real son for them.  It's unlike any other western I've ever seen, ad I mean that in the best way possible.  Refreshingly non-usual!

2.  Shane (1953)  A stubborn farmer (Van Heflin) hires a drifting stranger (Alan Ladd) to work on his farm.  The stranger turns out to be a fairly famous gunman who uses his deadly prowess to protect the farmer and his family from a bullying rancher who wants to push them off their land.  This is probably Ladd's most famous movie now, and with good reason -- he fits the role with a comfortable grace seldom equaled.

3.  And Now Tomorrow (1944)  A wealthy young woman (Loretta Young) lost her hearing in an illness.  Though her family and fiance (Barry Sullivan) try to convince her she needs to accept her condition, a young doctor (Alan Ladd) with an experimental treatment holds out hope that she could regain her hearing.  This is probably the first Alan Ladd movie I ever saw part of -- I watched most of it on AMC back in the 1990s, but didn't get to see the ending.  Raymond Chandler wrote the screenplay, and he just happens to be my favorite author.  I also really liked the book by Rachel Field that it's based on.

4.  The Great Gatsby (1949)  F. Scott Fitzgerald's classic story gets a film noir twist.  A successful gangster (Alan Ladd) buys a new house across the water from an old flame (Betty Field) whose husband (Barry Sullivan) is having an affair with the wife (Shelley Winters) of a gas station owner (Howard da Silva).  The gangster's next-door neighbor (Macdonald Carey) just happens to be the old flame's cousin, and he helps reunite them.  Alan Ladd's own life story mirrored Jay Gatsby's in many ways, and I've yet to see another portrayal of Gatsby as haunting and heartfelt as Ladd's.

5.  This Gun for Hire (1942)  A remorseless killer-for-hire (Alan Ladd) gets double-crossed by employer (Laird Cregar) and teams up with a singing magician (Veronica Lake) who is helping the government stop the same guy from selling American military secrets to the enemy.  This is the movie that turned Ladd into a star, and it's not hard to see why -- he's riveting.

6.  The Blue Dahlia (1946)  A weary veteran (Alan Ladd) returns home and finds his wife (Doris Dowling) is cheating on him with a nightclub owner (Howard da Silva).  He leaves her to go stay with his buddies (William Bendix and Hugh Beaumont), but when she turns up dead, he's the prime suspect.  The nightclub owner's wife (Veronica Lake) tries to help him solve the mystery before the cops nab him.  It's the only original screenplay written by my favorite author, Raymond Chandler, and its dialog sizzles delightfully.

7.  China (1943)  An American oil supplier (Alan Ladd) and his buddy (William Bendix) are selling oil to the Japanese, who have invaded China in the early days of WWII.  A teacher (Loretta Young) begs them to help her transport some students to safety, and the cynic slowly comes to care about people and causes other than himself.  Also, Alan Ladd's costume in this was a direct inspiration for Indiana Jones' costume, which is just cool.

8.  Whispering Smith (1948)  A railroad detective (Alan Ladd) discovers that his longtime best friend (Robert Preston) is stealing from the railroad.  To complicate matters, he used to be in love with the woman who ended up marrying his best friend.  This is the movie that made me fall in love with Alan Ladd.

9.  The Proud Rebel (1958)  A widowed father (Alan Ladd) with a mute son (David Ladd) gets hired by a farmer (Olivia de Havilland) to help repair her run-down farm and keep a greedy rancher (Dean Jagger) from seizing her land.  When he learns of a possible cure for his son's muteness, he sells the boy's beloved dog to raise the money for the operation, with heart-breaking results.  I love the scenes between Alan and his son David -- they're very sweet and natural together.

10.  The Glass Key (1942)  A crooked politician (Brian Donlevy) falls in love with another politician's daughter (Veronica Lake), but she falls in love with the politician's right-hand man (Alan Ladd).  When the politician gets accused of murdering the girl's brother, his right-hand man vows to clear his name, and there's nothing, not even a merciless beating at the hands of a sadist (William Bendix), that will stop him from doing so.  While filming this movie, Ladd and Bendix became best pals, their friendship reportedly beginning when Bendix failed to pull a punch soon enough and knocked Ladd cold during filming.

This is my third entry for the Alan Ladd Blogathon I've been hosting all weekend.  Check out the master list here for all the other entries! 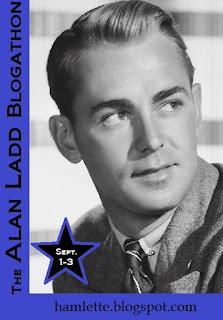 And, once again, happy birthday, dear Alan Ladd.  Thank you for all the joy you've brought me, and here's to many more hours spent watching your films.