This is precisely the sort of western I love best:  unironic and uncomplicated and unapologetic.  It's old-fashioned, with heroic heroes and villainous villains, and characters I just want to hang out with a lot.

NOTE:  If you're totally confused by this post because you thought that Audie Murphy played the character of Whispering Smith, don't worry.  I was confused by that too.  Murphy starred in a TV show by the same name.

The movie centers around the title character of Luke "Whispering" Smith (Alan Ladd), a quiet, serious railroad detective who rides around the country catching bad guys who rob trains. 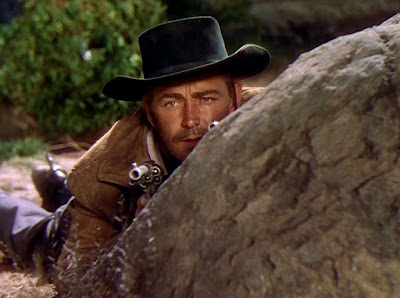 We first meet him in pursuit of a gang who shoot his horse out from under him and then skedaddle.  Luke flags down a train and climbs aboard, where he finds his good buddy Murray Sinclair (Robert Preston, who'd starred in This Gun for Hire with Ladd too).  Luke and Murray go way back -- they came west with the railroad together as young men, but haven't seen each other in some years. 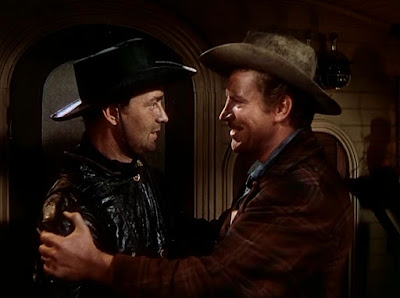 Murray works for the railroad too, with a wrecking crew that goes and cleans up train wrecks.  (These seem to be pretty regular occurrences, though we never find out if it's because of the rough terrain or hold-ups or what.  Maybe trains just fell off the tracks all the time back then, and we have forgotten that one perilous detail of the iron horse conquering the west.)

Anyway, the gang Luke is tailing seems to be hiding out somewhere in the vicinity, so Murray invites Luke to stay at his ranch while he's trying to find the outlaws.  Luke is reluctant to do so, however, and we soon learn why.  Murray's wife Marian (Brenda Marshall) used to be in love with Luke, and he with her. 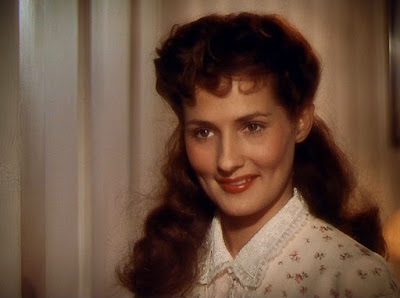 Luke gets wounded, though, and winds up at Murray and Marion's house to convalesce.  Sparks still sizzle between Luke and Marian, and Luke honorably stays as far away from her as he can.  He takes a room in town with his good friends Bill and Emmy Dansing (William Demarest and Fay Holden) and avoids Marian and Murray as much as he can. 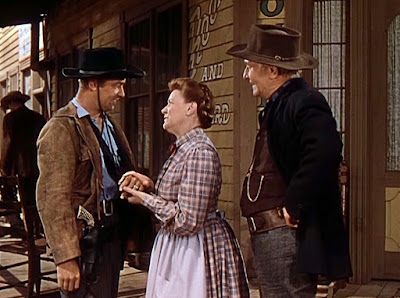 But of course he keeps bumping into them a lot anyway, because this is a small town and he's the star of the movie.  Marian admits to him that she wishes he'd have proposed because that's all she was waiting for, but he tells her it's no good wishing to change the past, and she should just be happy with Murray.  And she did seem to be reasonably happy with Murray until Luke showed up.  Which is why he's been staying away, I expect. 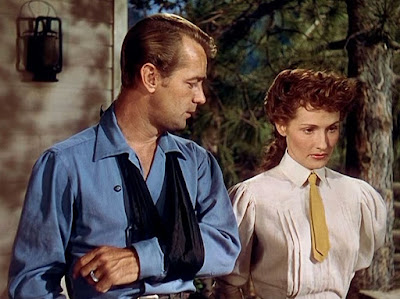 So Murray has this buddy named Barney Rebstock (Donald Crisp) who is a shifty rancher that nobody else much likes or trusts.  Rebstock also has this creepy gunhand named Whitey Du Sang (Frank Faylen) who makes everyone uncomfortable whenever he's around.  And we all know what they say about bad company corrupting good morals.

And then Murray gets in trouble with the railroad because he and his crew have been keeping some of the damaged goods from the train wrecks they help clean up, and the railroad says that's looting.  Murray gets very angry about this and turns against he railroad.  He also figures out that Marion still has feelings for Luke, and he jumps to the conclusion that she must be two-timing him, even though we know she isn't.  He starts hanging out with Rebstock a lot, spending time with saloon girls, and generally degenerating as fast as possible.  And of course, when Murray starts attacking the railroad, who has to go stop him?  His erstwhile best pal, Luke Smith. 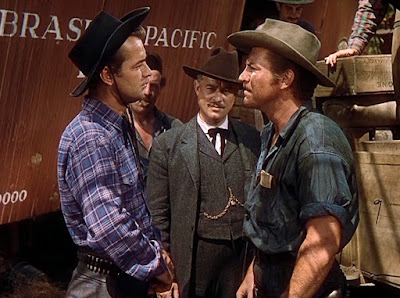 I love stories about one-time friends who are now on opposite sides of a problem, and that is a lot of why I like this movie so much.  It's not the best western I've ever seen (though it's also far and away not the worst), but it's a solid, enjoyable story with some first-rate actors who seem to be having a good time playing cowboys. 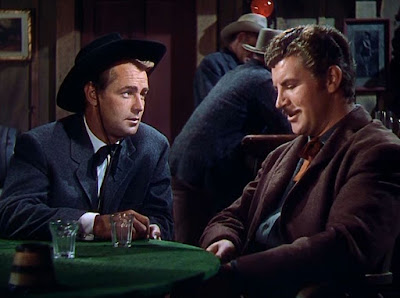 You can get some deeper things from this movie as well as just good-guys-versus-bad-guys, too.  Like I mentioned above, hanging out with bad people and shunning your good friends is not a good plan.  Also, I feel like Marion has a cautionary tale to tell us.  First of all, don't wait around for a guy to do all the romantic work -- what if he's shy, or worried about messing things up for his best friend?  Make your own intentions and feelings clear.  Second, if you give up on one guy and marry another one, then devote yourself to your husband and quit pining around for the other guy.  And if that other guy comes back into your life, whatever you do, don't make googly eyes at him.  Be mentally faithful to your husband as well as physically, because you are going to end up hurting everyone with your foolishness, both the husband who loves you and the guy who gave you up.

Anyway, I watched this for the first time last month before offering it for the western movies giveaway I did, and it's the movie that bumped Alan Ladd up from "hmm, he's nice" to "I Need More Alan Ladd Right Away!" status for me.  I watched it again last week and still liked it so, so well. 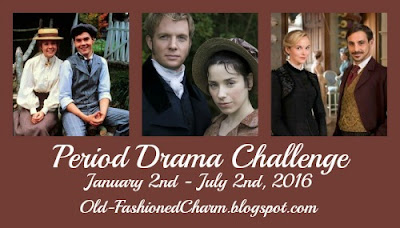 This is my 8th movie reviewed for the PDC.  Time to talk about costumes!  We've got lots of them to ogle.  Marian gets most of them.  We first see her in this pretty dressing gown.  You can tell from their house that Murray is doing well for himself, can't you?  No simple cabin for them! 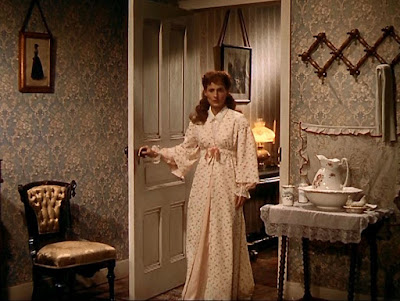 The next day, Marian has this smart shirtwaist and dark green split riding skirt. 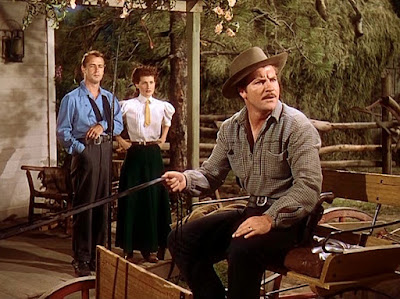 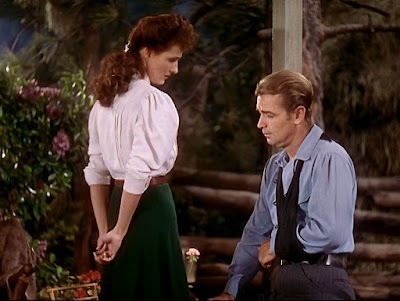 I really like her blue dress, and Tootie has informed me she wants it for Halloween.  (However, yesterday she said she wanted to be a cupcake, and the day before that she wanted to be Mary Poppins, so I have no idea what she'll want six months from now.) 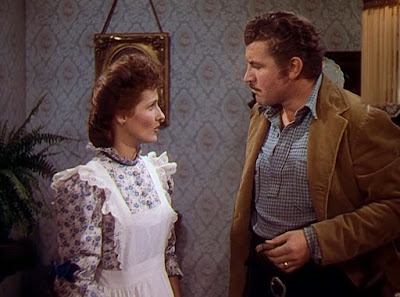 I don't care for this dress of Marian's at all.  It's like a two-sided blanket or something.  Just weird color choices and style.  (But Luke looks mighty nice all cleaned up, doesn't he?) 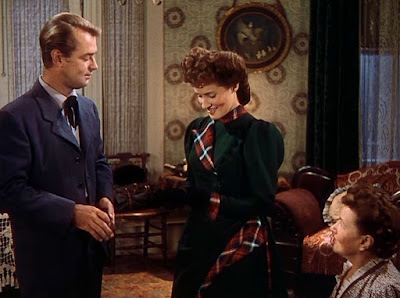 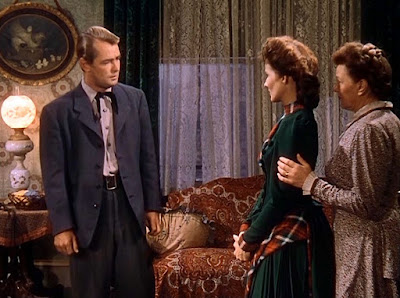 I wish I could've gotten a full-length shot of this cloak, though, because it is amazing.  I love the color, a deep cranberry.  I would wear it. 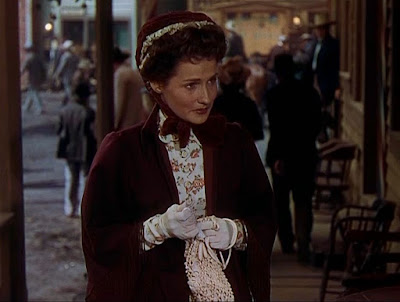 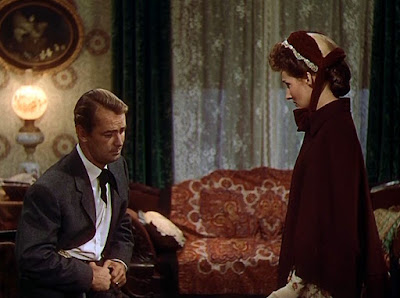 But this is my favorite of Marian's ensembles (and Luke's too).  I love the yellow shirt, so very Victorian.  I think the green skirt is the same one from earlier, and I like it when movie characters wear the same clothes more than once because it's so much more realistic than having a new dress for every day.  Luke's got dark green on here too, though it's hard to tell in this shot, and I think it's a lovely color for him. 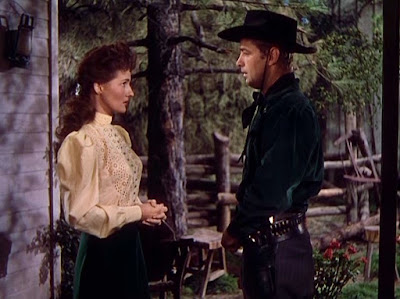 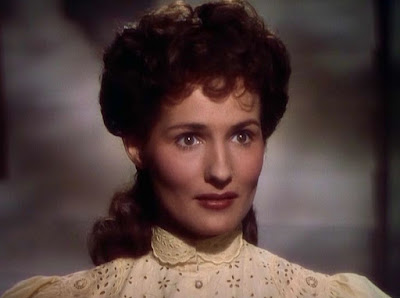 This fringey buckskin jacket makes me think of Shane, how about you?  (I have this private head-canon story where Shane and Luke Smith are actually the same guy.) 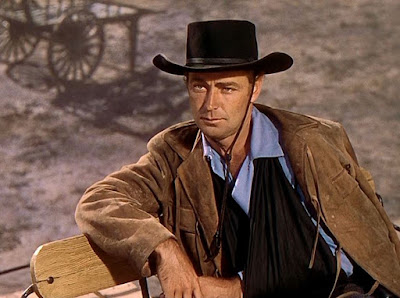 They mostly put Luke in blue, which is also a good color for Ladd, with his lighter hair and blue eyes.  Not a huge fan of the pattern of this shirt, though.  I mostly included it to point out the tea set, because I have a great fondness for red-pattern china. 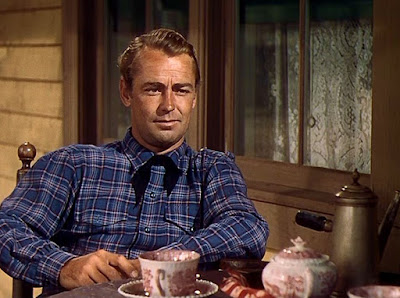 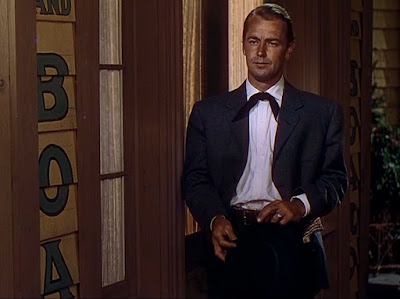 Emmy mostly wears plainer dresses that manage to be practical without looking dowdy. 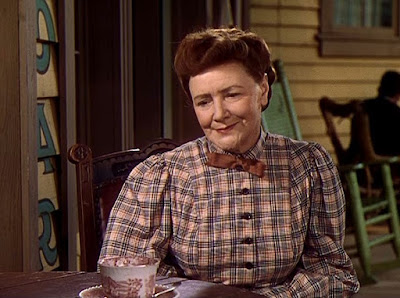 I love this shot of the Dansings' sitting room.  They're doing right well for themselves too, aren't they?  This is such a peaceful shot, Luke playing Solitaire and Emmy knitting.  So companionable.  I want to sit down on that sofa behind them and read a book, enjoy the chummy quiet. 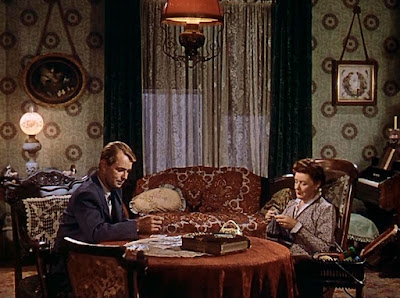 For saloon girls, these two have fairly demure dresses, don't they?  I love the contrast of the bright purple and green. 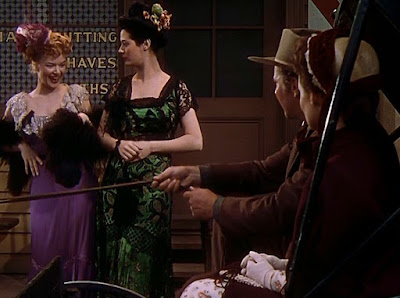 Is this movie family friendly?  Yes.  Zero cussing, and all violence is old-school and minimal.  The above saloon girls are too friendly with Murray, implying he's been tomcatting around, but nothing overt.  Luke and Marian Do Not have an extramarital affair.  They never so much as kiss.  Good boy, Luke.
Posted by Hamlette (Rachel) at 9:03 AM