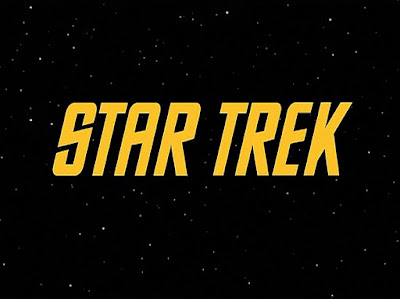 I'd been a fan of Star Trek for several years before I finally saw this episode.  I knew a lot about it, because my brother and I spent hours poring over books like The Nitpicker's Guide for Classic Trekkers by Phil Farrand and The Star Trek Encyclopedia by Michael and Denise Okuda.  From what I read in those books, I knew I was going to love this episode when I finally saw it.  I just didn't know how much.

I've always been drawn to stories of someone proving themselves.  Whether it's proving they're good at something when someone else says they're worthless, or proving they're innocent when everyone assumes they're guilty, those stories have pulled me in for as long as I can remember.  I especially love stories of people wrongly accused of committing a crime and needing to clear their name. 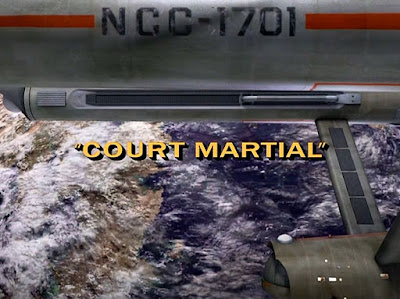 At the beginning of the season one episode "Court Martial," the Enterprise is orbiting Starbase 11, seeking repairs after sustaining severe damage during an ion storm.  During the storm, they lost one crew member, Lt. Cmdr. Ben Finney (Richard Webb).  Captain Kirk says he jettisoned the pod Finney was in after the storm became so severe he had no choice.  However, the computer log shows him jettisoning the pod before he needed to.  Commodore Stone (Percy Rodriguez) discusses this with Kirk, soothing him, trying to chalk the mistake up to pressure.  We all know Kirk is the youngest Starship Captain ever, and Stone clearly things he's just too young and inexperienced to do the job correctly.


Captain Kirk insists he's been under worse pressure, that he did not make a mistake, and that the ship's record must be wrong.  Stone reminds him that computers don't lie.  Man versus machine becomes a major theme for this episode -- can you trust a computer more than a person?  Are computers only tools, or are they becoming revered as much as people, possibly even more?  In 1967, when this first aired, such considerations probably struck the audience as silly.  How could a computer be smarter than a person?  Those foolish 23rd-century Starfleet types, trusting computers so implicitly.  Here in 2016, however, we live in a world where computers are considered more trustworthy than people for performing particular tasks, because... they don't lie.  They don't cheat.  They don't fall asleep at the wheel or get distracted by a rowdy toddler in the back seat.  Technology has changed amazingly much in the twenty years since I first saw this episode, which makes "Court Martial" feel more timely every time I watch it.

But I digress.  Captain Kirk insists he did not make a mistake, that the computer must be in error.  Commodore Stone tries to convince him to take a desk job somewhere, stay with Starfleet but give up his captaincy.  Kirk sees this for what it really is:  trying to bury a problem.  Commodore Stone says that no Starship captain has ever been put on trial before.  Surely Kirk doesn't want to be the first, does he?  No no, better to go quietly and not make a fuss.  For the good of the service, Jim.  Come on, be a good boy.


Um, yeah.  Stone clearly doesn't know James T. Kirk.  Defeat, retreat -- those words are not in Kirk's personal dictionary.  Which gives me one of my favorite exchanges in the whole episode.


Complicating this whole scenario are two women:  Jame Finney (Alice Rawlings) and Lt. Areel Shaw (Joan Marshall).  Jame is the daughter of Ben Finney -- we learn that Finney and Kirk were best buddies for many years, dating back to when Kirk was a cadet at Starfleet Academy, and Finney was an instructor.  In fact, Jame is named after James Kirk.


Jame is here on Starbase 11, and her presence ensures that Kirk constantly feels horrible about Finney's death, whether it was Kirk's fault or not.  She cries and fusses and tries to punch him, and generally behaves as a distraught teen daughter is expected to, at least at first.

Areel Shaw is a lawyer in the judge advocate's office, and an old flame of Kirk's.  She knows down to the hour how long it's been since they saw each other last, so I get the feeling that for her, at least, their relationship was quite serious.


They seem to have parted on good terms, though, because she greets him warmly.


Not only that, but she gives him some free legal counsel and recommends a defense attorney.  He asks if she'd represent him instead, but she says she's busy.  She tells him several strategies that the prosecution will use against him, and when he finally asks how she knows all this, she admits that it's "because, Jim Kirk, my dear old love, I am the prosecution."

You know, I'm starting to think there's an actual method to Kirk's tomcat ways.  How helpful to have someone from the judge advocate's office who is so fond of you she'll sabotage her own case, possibly her career, to help you out.

When Kirk returns to his room, he finds it filled with stack after stack of books.  Perched amid the books is an odd little man, one Samuel T. Cogley (Elisha Cook Jr.), who gives Captain Kirk a delicious lecture on the importance of books.


This little speech is actually my favorite part of the entire episode, and I quote it frequently.  I know my book-loving friends will enjoy it, so here it is, in its entirety:

STC:  "What's the matter?  Don't you like books?"
JTK:  "Oh, I like them fine.  But a computer takes less space."
STC:  "Huh.  A computer.  I've got one of these at my office.  Contains all the precedents, a synthesis of all the great legal decisions written throughout time.  I never use it."
JTK:  "Why not?"
STC:  "I've got my own system.  Books, young man, books.  Thousands of 'em.  If time wasn't so important, I'd show you something:  my library.  Thousands of books."
JTK:  "What would be the point?"
STC:  "This is where the law is.  Not in that homogenized, pasteurized synthesizer.   Do you want to know the law?  The ancient concepts in their own language?  Learn the intent of the men who wrote them?  From Moses to the Tribunal of Alpha Three?  Books!"
JTK:  "You have to be either an obsessive crackpot who's escaped from his keeper or Samuel T. Cogley, attorney at law."
STC:  "Right on both counts.  Need a lawyer?"
JTK:  "I'm afraid so."


This is the first thing I ever saw Elisha Cook Jr. in, and I'm always delighted when he pops up in an old movie or TV show.  I have such a fondness for him, whether he's playing  dastardly gunsels in classic film noirs like The Maltese Falcon (1941) and The Big Sleep (1946) or sweethearts in things like Shane (1953).


The rest of the episode concerns the trial itself.  I'm quite fascinated by trials, to be honest.  Although I've never wanted to become a lawyer (I left that in my brother's capable hands), I love watching TV shows and movies about court cases, reading books about them -- they're so interesting to me.  I actually got to be on a jury once, eleven years ago, which I really dug.  However, I know that not everyone is as fascinated by courtroom scenes as I am, so I won't go into details here.  Everything hinges on the fact that computers can't lie, can't make mistakes, and are therefore considered more trustworthy than people.  Samuel T. Cogley insists this is morally wrong, and with Spock's help, proves that it is also false in this case.


As Areel Shaw said earlier in the episode, "You're not an ordinary human, you're a starship captain, and you've stepped into scandal."  Kirk isn't allowed to make mistakes, to have a lapse of judgement, to forget what order to do things in.  He has to be perfect in every official action he does.  No errors.  No off days.  Not only do all the lives of his crew depend on him, but often, the lives of countless others that they encounter.  And wherever he goes, he represents Starfleet -- his every action reflects on them.  It's a terrible burden, even for Kirk's broad shoulders.  But he once again proves that, young as he is, he is perfectly capable of handling it.

There it is, that theme of proving yourself.  Kirk proves he's innocent, but also proves he's able to do what others think he might not be.  No wonder I love this episode so much.

Annnnnd I might also love it because Jim Kirk has never looked yummier.  I must admit I spent more time screencapping drool-worthy shots of him than I did anything else in the episode.  I can't resist sharing some with you now. 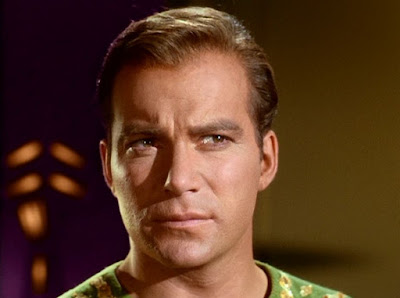 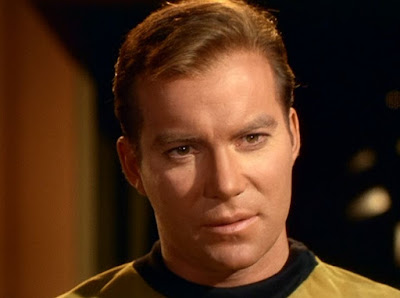 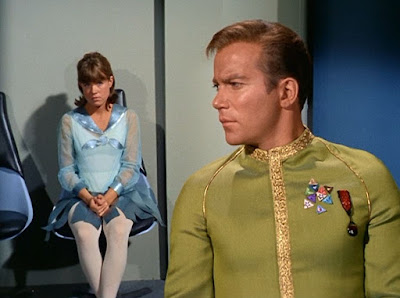 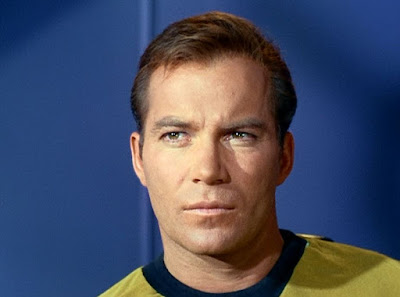 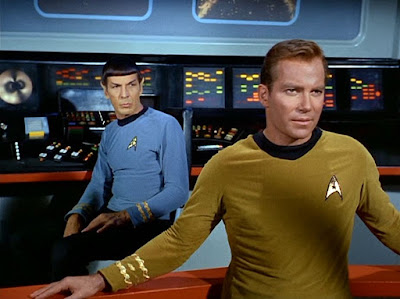 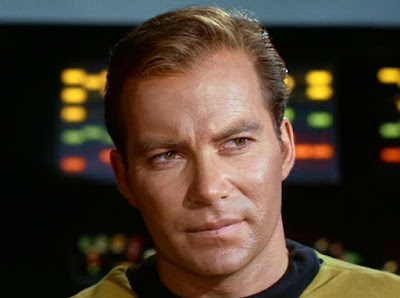 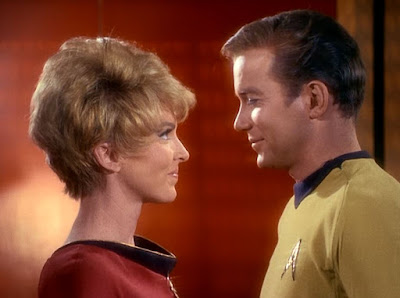 This has been my contribution to this year's Favourite TV Show Episode Blogathon.  Visit the official list of blogathon entries at A Shroud of Thoughts, where you'll find so many wonderful posts about classic shows. 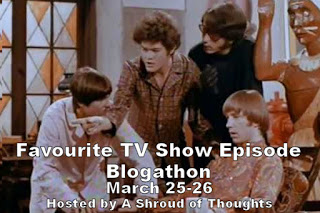