Time for me to quick post my Inkling Explorations selection before March is over!  This month's topic is "A scene involving a letter, package, or post office in film."  You can read more about the series on Heidi Peterson's writing blog, Sharing the Journey.

I'm going to share part of the wonderful Christmastime comedy We're No Angels (1955), which I have reviewed here.

Joseph (Humphrey Bogart), Jules (Peter Ustinov), and Albert (Aldo Ray) are convicts on Devil's Island who have escaped the prison and taken refuge in a mercantile, where they've persuaded the proprieters to let them do a few odd jobs.  While up on the roof, supposedly fixing it, they watch the family through various windows and learn all about their troubles. 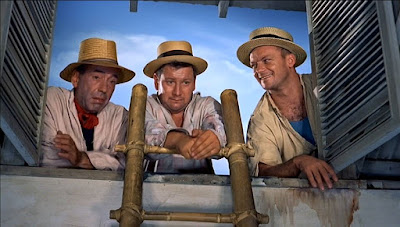 While they're watching, the daughter, Isabelle (Gloria Talbott) accepts a letter for her father and opens it. 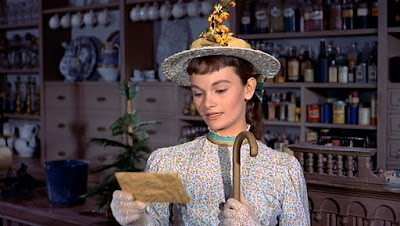 She reads part of it, then faints. 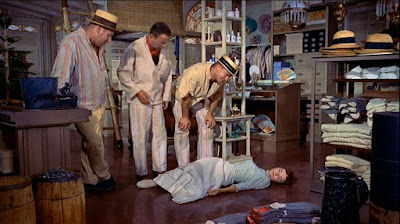 The three men scurry down from the roof to assist her and her mother, Amelie (Joan Bennett). 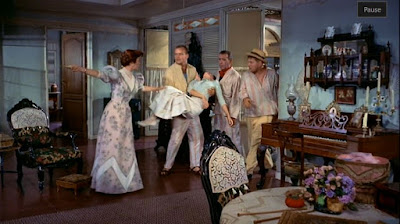 They then give the letter to the girl's parents, telling her, "It's there, on the second page, the deadly paragraph."  The letter contains the news that the owner of the store and his nephew were coming to see for themselves why the business is failing.  Poor Isabelle has convinced herself she's in love with said nephew, and the letter also contains the news of his engagement to someone else, hence all the fainting.

By the end of the movie, the three convicts have solved all the family's problems, including Isabelle's infatuation, and although they may not be angels, they earn halos just the same. 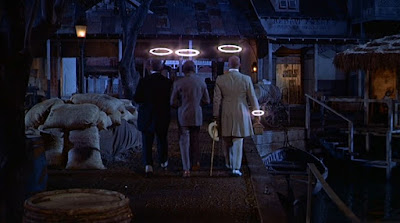 If you've never seen We're No Angels, I urge you to find it and watch it -- you can buy it on DVD quite inexpensively right now, and it is delightful.
Posted by Hamlette (Rachel) at 10:18 PM