A few years ago, I posted a list of my top ten favorite romantic comedies.  You can read it here.  Today, I'm doing something a little different -- a list of my ten favorite romantic dramas!  I've excluded movies that belong to other specific genres like westerns, musicals, or film noir, simply because... those aren't in the drama section of my movie collection, okay?

As always, if I've reviewed a film on this list, I've linked the title to my review. 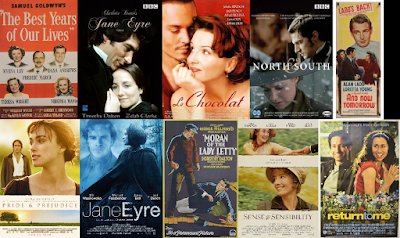 1. The Best Years of Our Lives (1946) Three veterans (Dana Andrews, Frederic March, Harold Russell) find returning to civilian life much harder than they'd expected.  Bonus: this movie contains THREE love stories!  You get love between a husband and wife getting reacquainted, between childhood sweethearts, and between new acquaintances.

2. Jane Eyre (1983) Strong-spirited governess Jane Eyre (Zelah Clarke) falls in love with her wealthy, secretive employer (Timothy Dalton), but they cannot marry until they both deserve each other.

3. Chocolat (2000) A mysterious woman (Juliette Binoche) opens a chocolate shop in a sedate French village and teaches its inhabitants to reexamine their attitudes and customs.   Also, she falls in love with a gypsy (Johnny Depp).

4. North and South (2004)  A woman (Daniela Denby-Ashe) from the pastoral south of England moves to the industrial north and spends months ignoring the fact that a wealthy manufacturer (Richard Armitage) is in love with her.

5. And Now Tomorrow (1944) A wealthy young woman (Loretta Young) loses her hearing in an illness. Though her family and fiance (Barry Sullivan) try to convince her she needs to accept her condition, a young doctor (Alan Ladd) with an experimental treatment holds out hope that she could regain her hearing.

6. Pride and Prejudice (2005) Elizabeth Bennet (Keira Knightley) and Mr. Darcy (Matthew Macfadyen) can't fall in love with each other until they both come to understand themselves first.  Bonus: multiple love stories here too!

7. Jane Eyre (2011)  Strong-spirited governess Jane Eyre (Mia Wasikowska) falls in love with her wealthy, secretive employer (Michael Fassbender), but they cannot marry until they both deserve each other.

8. Moran of the Lady Letty (1922)  A wealthy young man (Rudolph Valentino) gets shanghaied onto a smuggling ship, whereupon he falls in love with the only survivor (Dorothy Dalton) of an abandoned vessel the smugglers rob.

9. Sense and Sensibility (1995)  A young woman (Emma Thompson) and her sister (Kate Winslet) both discover that their own particular personality strengths are also weaknesses when it comes to finding a smooth path to true love.  Bonus: this movie also contains three love stories.  Because why not.

10. Return to Me (2000)  A man (David Duchovny) falls in love with the woman (Minnie Driver) who was the heart donor recipient of his wife's heart after she died.

I just realized that Judi Dench is in three of these:  Chocolat, Pride and Prejudice, and the 2011 Jane Eyre.  How nifty is that? 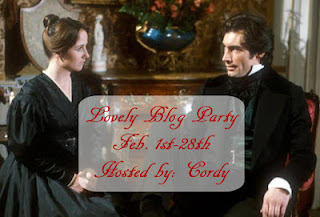 This post is a contribution toward Cordy's Lovely Blog Party, which is in full swing and continues all month!  You can read her kick-off post here.