I have all my comedies shelved together, but I decided that since Valentine's Day is only a week away, I would make an extra list from that section, one of movies that revolve around boy-meets-girl.

You'll notice there are no Classic Hollywood movies here.  I kind of feel like rom-coms are a genre that began in the '80s.  Before, you had romantic dramas, and you had comedies that happened to involve romance, but you didn't really have funny movies that focused entirely on people falling in love.  There are of course a few exceptions -- the original Sabrina has a lot of humorous moments, and I almost put How to Steal a Million on here, except that its focus is really the art thievery, and the romance happens because of that.  Hmm.  Maybe I'm splitting hairs here.  Oh well.


And yes, While You Were Sleeping is on my list of Ten Favorite Christmas Movies too.  Overlaps happen, especially with movies I love very much. 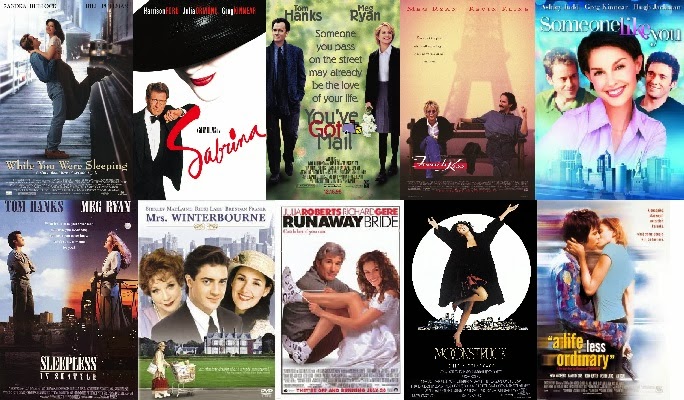 When a lonely train fare collector (Sandra Bullock) rescues a handsome stranger (Peter Gallagher) from being hit by a train, his family thinks she's his fiancee. I love the entire cast, from Sandra Bullock to Glynis Johns, and it's one of the funniest movies I've ever seen.

When Sabrina (Julia Ormond) returns from Paris, suddenly dazzling instead of dowdy, her father's employer (Harrison Ford) pretends to woo her to prevent his younger brother (Greg Kinnear) from having a fling with her.  A lot sweeter than it sounds, and I much prefer it to the 1954 original because the cast has better chemistry and the whole thing works better.

Kathleen (Meg Ryan) and Joe (Tom Hanks) are online penpals and real-life bookstore-owning rivals, and they don't realize who each other is until they've started falling in love.  Another remake, this time of a Jimmy Stewart movie called The Shop Around the Corner (1940), and another Greg Kinnear movie where he doesn't get the girl.  Sensing a trend here!

Kate (Meg Ryan) chases her fiance (Timothy Hutton) to Paris to win him back, and enlists the help of impossible Frenchman Luc (Kevin Kline) on the way.  Another Meg Ryan movie -- yeah, I'm a fan, especially of her '90s work.  Also, this is the only rom-com I've ever seen that involves smuggling and chase scenes.

Jane (Ashley Judd) gets dumped and develops a theory that she thinks explains why men leave women, but her co-worker Eddie (Hugh Jackman) thinks she's both adorable and wrong.  The trend is official!  Greg Kinnear loses the girl again.  This time he's a a bit of a jerk, though, so I don't care.

Widowed Sam (Tom Hanks) and complete stranger Annie (Meg Ryan) are clearly M.F.E.O (made for each other) even though they don't meet until the end of the movie.  Far-fetched, implausible, and delicious.

Single, homeless, and pregnant, Connie (Ricki Lake) is mistaken for a dead man's wife and taken in by his wealthy mother (Shirley MacLaine), though his brother (Brendan Fraser) remains skeptical of her.  Also far-fetched and implausible, but very sweet anyway.  Especially the tango scene!

Maggie (Julia Roberts) has been to the altar three times, but never married, and newspaper columnist Ike (Richard Gere) stakes his career on her running away from her fourth fiance too.  I like this way better than the first Roberts/Gere movie, Pretty Woman (1990).

Loretta (Cher) falls for her fiance's weird brother Ronny (Nicholas Cage), which throws her Italian family into turmoil.  More turmoil than usual, anyway.  This has all the big-ethnic-family charm that My Big Fat Greek Wedding (2002) needed more of.


Robert (Ewan MacGregor) kind of accidentally kidnaps his employer's daughter (Cameron Diaz), and two wacky angels have to get them to fall in love or lose their jobs.  Yes, it's a very odd, very quirky movie.  But worth seeing for Ewan's rendition of "Beyond the Sea" alone.  Rated R for violence an profanity, though, just FYI.

Also, the soundtracks for While You Were Sleeping, Sabrina, You've Got Mail, Sleepless in Seattle, and Runaway Bride are some of my favorite soundtracks of all time.  In fact, Sabrina was one of the first soundtracks I ever bought.
Posted by Hamlette (Rachel) at 12:56 PM