The truth is, I don't know if I could possibly like a Sherlock ep as well as I love "The Empty Hearse."  So my appreciation of "The Sign of Three" may have suffered from the lingering glow I still feel from the season premiere.

Here, there be spoilers, just FYI.

To me, "The Sign of Three" felt kind of patchy.  I really liked some parts, but others I quite disliked.  I mean, do they really mean to imply that Sherlock makes all his brilliant deductions under imaginary orders from Mycroft?  I liked the idea of seeing inside Sherlock's Mind Court, as it were -- that was quite cool, especially when it flipped back and forth to the reality of him online-chatting with the real people.  But did we need the overly Freudian addition of Mycroft elevated above him on the judge's bench, the older and smarter brother Sherlock both reveres and fears?  No.  Totally could do without that.

Now, that part where Sherlock was interrogating Mary's guy friend and laying down rules for his future interaction with Mary?  Could.  Not.  Stop.  Laughing! 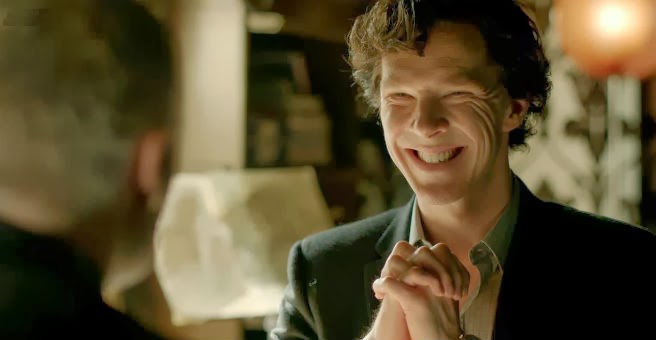 And I went off into giggle fits over him folding like a dozen napkin sculptures in three minutes and saying, "This just happened."

I think mostly, though, this ep felt unfocused.  (You kinda knew that was coming, didn'tcha.)  It popped back and forth between heartfelt (Sherlock staring at John in shocked silence when John asks him to be best man) to silly (drunk people aren't all that funny) to unnecessarily stupid (puking on a crime scene?  Don't do that again!!!).  Things that I think were supposed to be funny, like Lestrade rushing over to Sherlock's flat with guns blazing... I felt so bad for Lestrade that I didn't think it was funny at all.  And I felt Sherlock's worry over being best man much too keenly to laugh at a lot of other scenes.  Unlike my husband, I don't feel embarrassed with characters, but I do feel worried or afraid with them, and find it hard to laugh at characters in distress.

The mystery was quite cool.  As were the allusions to the canon novel The Sign of the Four, like the snippet of Sherlock and John chasing a blowdart-wielding Pygmy and the fact that it's a locked-room murder mystery.

And Mary Morstan Watson -- can she be more wonderful?  I can't imagine so, but we shall see!  I'm hoping to watch "His Last Vow" tonight :-D 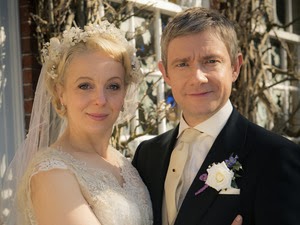