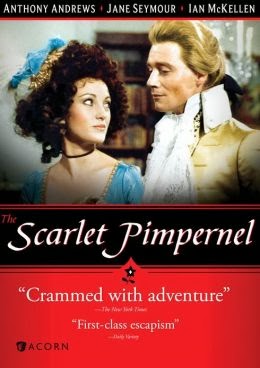 I have finally seen this!  After reading people's rapturous allusions to it in the blogosphere for the last year or so (since I came out of my internet shell and started reading more blogs, basically), I've been wanting to see what all the fuss is about.  Especially since... Ian McKellen!  Jane Seymour!  Intrigue and costumes and bits of dialog that have been quoted so often I knew them already even though I'd never seen the movie!

So my dear friend DKoren and I got copies and watched it together over three nights.  Despite a few technical difficulties, we had a jolly time laughing at Sir Percy's (Anthony Andrews) affected foppishness, exclaiming over Marguerite's (Jane Seymour) loveliness, and marveling at Chauvelin's (Ian McKellen) dark good looks.

I know Chauvelin is supposed to be the bad guy and all, but wow... even 20 years ago, Ian McKellen was an amazing actor.  The nuances he could add with a cheek twitch or a lowering of his eyebrows, and the way he could switch his voice from calm to brusque or angry in one breath -- I was agog. 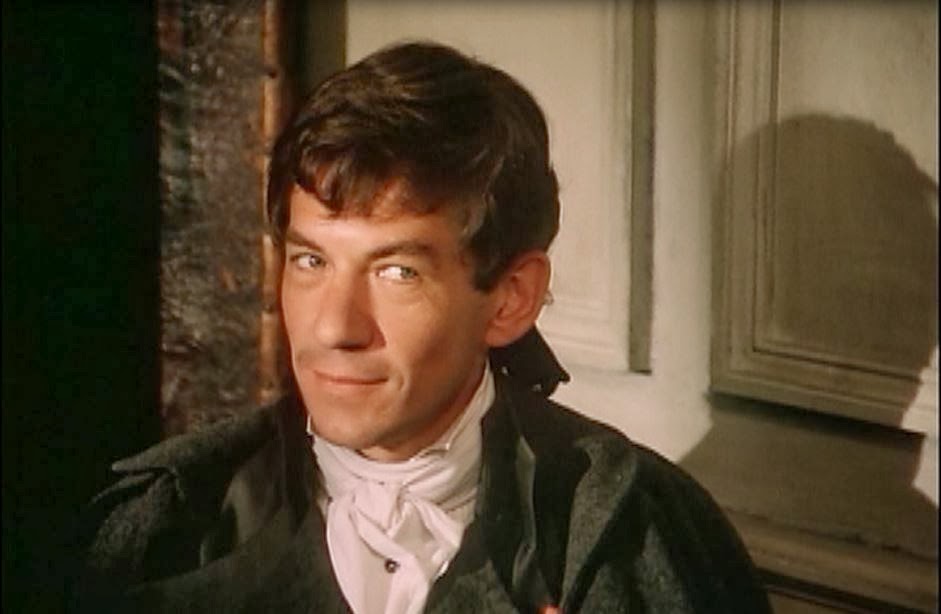 By comparison, I'm afraid that even when Sir Percy wasn't making up the most horrible poetry or taking excessive snuff, I wasn't particularly interested in Anthony Andrews or his character.  Except when he would look very sad and pensive once in a while, that was quite nice. 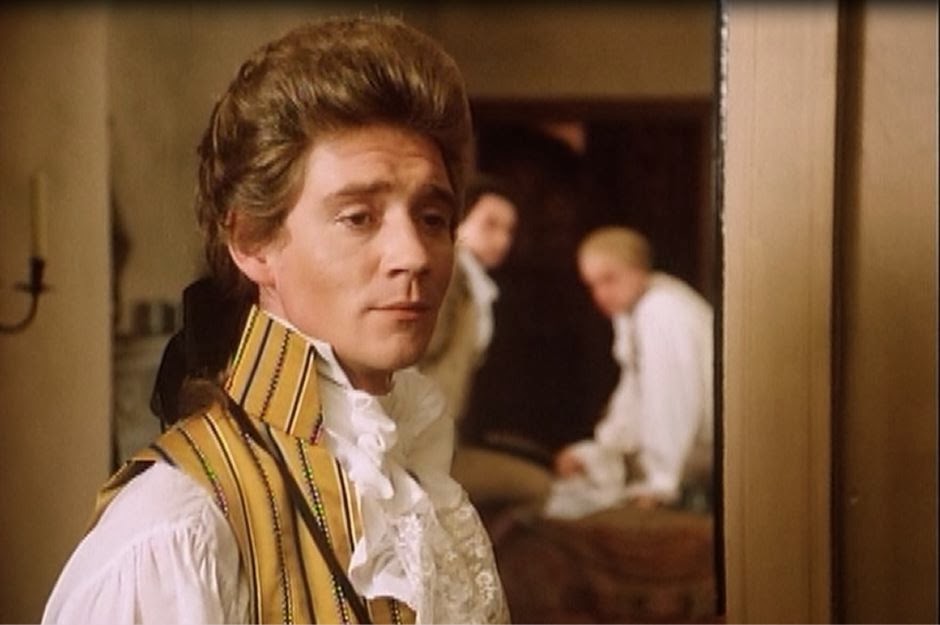 And definitely except when, toward the end, he got all scruffy and manly looking for one of his disguises. 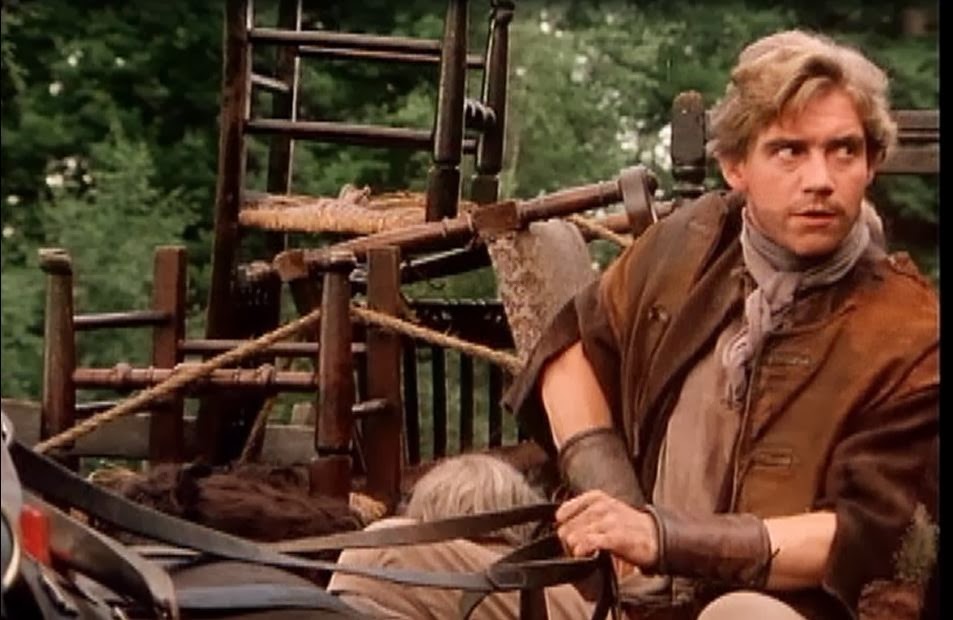 Bare forearms with those awesome gauntlets, a gorgeous shadow on his face, and that wonderfully tousled hair.  If he had looked like that during the whole movie, I would have been reduced to a puddle of drool within the first twenty minutes.  Ten, if he and Ian McKellen had had more scenes together.  So, Anthony Andrews fans, point me to some movies where he looks more like that!

And I cannot neglect to discuss Jane Seymour's flawless beauty.  I've seen her at about this age before in Somewhere in Time (1980), and almost a decade younger in Live and Let Die (1973), but I have never seen her quite this beautiful. 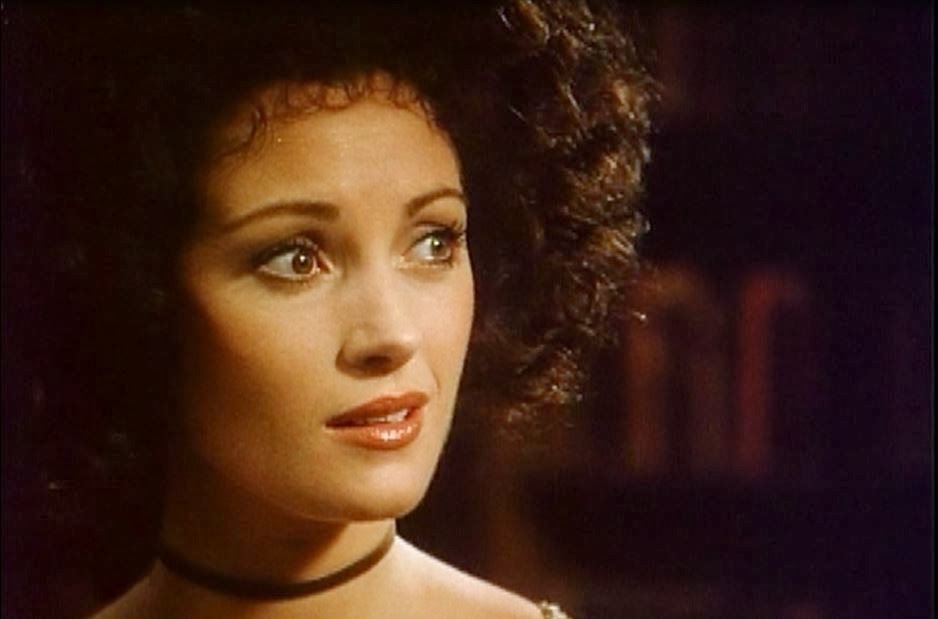 Perfect nose and eyes as always (and you could really see here that she has mismatched eyes, which is so mysterious and alluring), but the fancy hair and clothes really set off her face so perfectly here.  Breathtaking.  Not to mention she had a pretty difficult role -- Marguerite has to be intelligent enough to see the man behind the mask at the beginning, but not so swift that she figures out who her husband really is right away.  How she didn't recognize his whispers in that library scene is beyond me.

Speaking of library scenes -- what wonderful sets!  I kept remarking to my friend about how I wished for all those built-in bookcases that kept appearing in various shots.  And there's a ball where they're dancing on such a wonderful black-and-white checkered floor.  Some day I'm going to have a floor like that in my kitchen.

I suppose I should really make a brief mention of what this movie is actually about, in case anyone reading this doesn't already know.  The French Revolution is in full swing, heads rolling everywhere, and this mysterious guy known as the Scarlet Pimpernel keeps rescuing aristocrats from the guillotine.  He's called that because a pimpernel is a little flower (not a squash, a dark bread, or a facial blemish), and he signs his notes with a red one.  So anyway, Citizen Chauvelin is hunting this guy, but no one knows who he really is because he always has such clever disguises.  We the audience know right away that he's actually Sir Percy Blakeney, who pretends to be the most air-headed British aristocrat you have ever imagined.  Cowboy refers to him as "that annoying little English dude" and kept insisting the French should chop his head off for being so irritating.  But he wasn't actually watching the movie, he was just using the computer in the same room and supposedly not paying attention, so we'll let that slide.

Anyway, naturally Sir Percy falls in love with Marguerite, who happens to be the same woman that Chauvelin is in love with already.  And that's why I feel horribly bad for Chauvelin through the whole movie.  He really does seem to love Marguerite, but he doesn't have the money or power or mysteriousness of Sir Percy, so he loses her.  Even though he's way more interesting and attractive than Sir Percy's pretended persona. 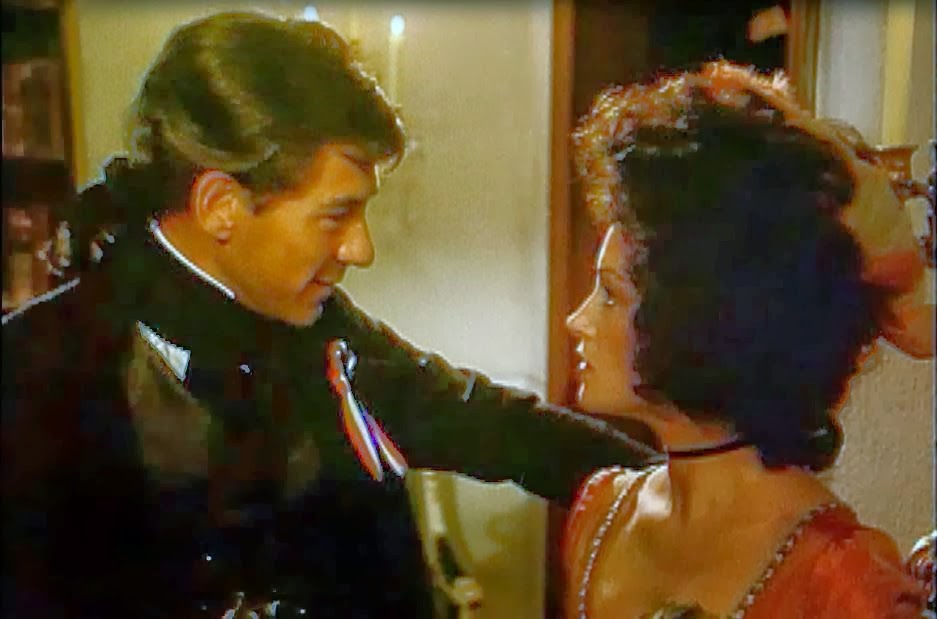 And then it's all daring rescues and misunderstandings and sword fights and fun.

So.  Did I enjoy this movie?  Yes.  But I didn't actually love it, so I am going to give away my copy!  It was brand-new when I bought it, and I've only watched it once.  Click here for the giveaway post.

Is this movie family-friendly?  Mostly.  There are a couple of bad words, low-cut dresses, very brief scenes of people kissing in bed, and some minor violence of the swashbuckling sort (swords and pistols).  You never see people's heads cut off, that's all implied.  They do hold up a head now and then, but you only see it from behind and it looks like a hairy ball.  I'd say this is either a mild PG-13 or a serious PG.

This post is part of the Anthony Andrews Blog Hop hosted by Carissa of Musings of an Introvert.  Click below to visit other peoples' blog posts about him and his movies.