Today would have been Vic Morrow's 85th birthday.  This year, instead of posting someone's fanvid or just a nice picture of him, I'm embedding the two halves of one of my favorite Combat! episodes:  "The Long Way Home."  This is a two-part episode, each part being about 45 minutes long, so together they basically make an hour-and-a-half-long movie.  And if you've never watched Combat! before, that's okay -- this is a really good introduction episode.  All the regular characters get screen time, and you can get a good feel of who they are and what the show is like from just this one adventure.

In "The Long Way Home," Sergeant Saunders (Vic Morrow) and his squad are captured by the Nazis (who they call Krauts most of the time) and interred in a POW camp run by the vicious Captain Steiner (Richard Basehart).  Saunders and his men are determined to escape, of course, and the bulk of the episode revolves around that.  But it's also a wonderful portrait of the different ways people cope with extreme situations.  Do they become apathetic?  Lose control of themselves in their fear?  Fill with determination?  It's really, really well-written and well-acted. 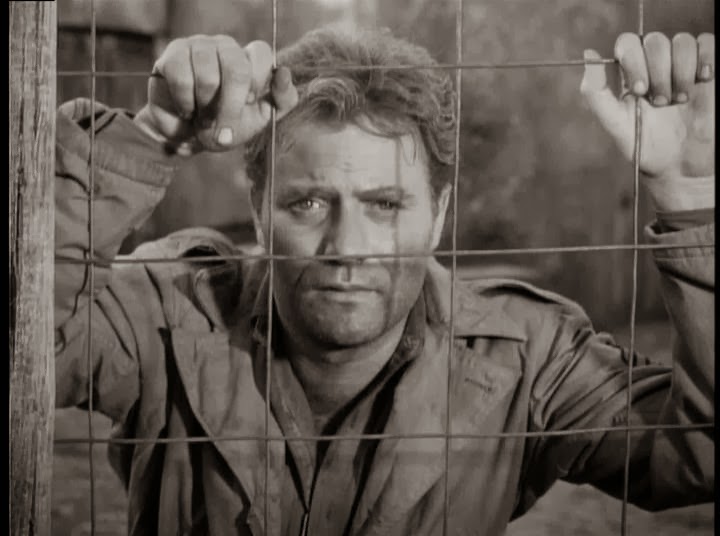 In case you aren't familiar with my favorite show, Combat! ran from 1962 to 1967 and centered on a handful of American soldiers during WWII, fighting the "Krauts" in Normandy following the D-DAY invasion in June of 1944.  This episode is from season two, and it's my second-favorite ep from the whole show!  If you enjoy war movies, movies about prison escapes, things set during WWII, or just movies that delve into human nature, you will probably enjoy this.

Vic Morrow is magnificent here, digging into a role he was familiar with and bringing out new nuances and depths.  The game of wits between his American sergeant and the German captain is superb.

Is this family-friendly?  No bad language, nothing suggestive, and most of the violence is implied or very old-style, with people getting shot and just falling over, no gore.  But there are some beatings and the implication of torture, and general war-related violence.
Posted by Hamlette (Rachel) at 3:18 PM