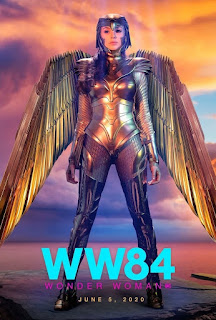 Well, I can no longer say that I've never been to any of the new DC movies in the theater, because I went to see this last weekend.  I'd say I liked it about as well as the first Wonder Woman (2017).  I liked it enough to not be sorry I've seen it, but not enough to seek it out for a second viewing.

I don't have a lot of thoughts on this movie, so here are just some reactions and reflections:

All in all, it was a fun two hours, with a draggy half an hour added to it of extra-long fight scenes that just kept going and going.  All of the new DC movies I've seen so far (which is, admittedly, only 3) have suffered from the delusion that more = better, especially when it comes to action scenes.

But Gal Gadot, Chris Pine, and Pedro Pascal were entertaining and enjoyable, so I don't feel like I wasted my money, at least.