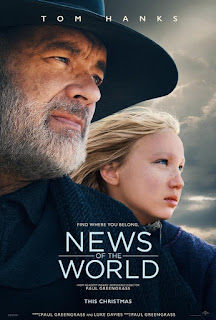 I really didn't know much about News of the World when I went to see it today, aside from the fact that it has Tom Hanks in it, it's a western, and it involves him on a journey with a young girl.  That was it.  That's pretty minimal for me going into a movie, to be honest, as I usually have at least a general idea of a movie's plot, going in.  But sometimes it's nice just to go in cold and see what happens.  No expectations.  Just take it as it's played.

I think that was a good choice for this movie, because that's very much how the characters have to deal with its events -- just deal with each thing as it happens.

Captain Jefferson Kyle Kidd (Tom Hanks) makes his living reading aloud out of newspapers in little towns across Texas.  He takes a collection of recent periodicals from town to town, charges people ten cents each to attend his reading, and then reads aloud all sorts of news from all over the country and the world.  He's got a showman's instincts to help him select stories that will appeal to each audience and, if it's a lonely and unusual way to earn a living, it's certainly an honest and useful one.

On the way from one town to the next, he comes upon an overturned wagon.  The person who'd been driving it was strung up from a tree nearby, no explanation ever made of why.  Kidd finds a young girl (Helena Zengel) hiding nearby.  Blonde, blue-eyed, freckled, and very obviously white, the girl speaks only Kiowa.  Kidd searches through the wagon's wreckage until he finds official orders the dead man was carrying, orders to take this girl to an aunt and uncle living hundreds of miles away.  Orders that tell the girl's story -- taken by Kiowa's during a raid on her family when she was three, raised by them, then taken again by soldiers during a raid on her Kiowa family.

The papers list the girl's name as Johanna, but she won't answer to it.  A passing Cavalry troop tells Kidd to take her to a nearby town, where the local Indian agent can take charge of her.  But when it turns out the agent won't be back for months and months, Kidd determines to take Johanna home to her kinfolk himself. 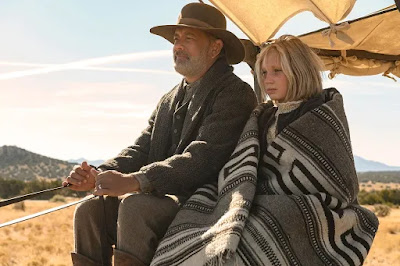 Kidd teaches Johanna some English.  Johanna teaches him some Kiowa.  They both know a little broken German, she because her birth family was German, and he because he is a wordsmith and a storyteller and he communicates however he can with those he meets.

Kidd's really on two missions, on this journey.  He's got to take Johanna to her aunt and uncle, and he's got to say goodbye to his wife.  He accomplishes both.  But then (SPOILERS!) he realizes that one of those goodbyes was a mistake, and he begins a new life built upon the old.

One of the central themes of this movie is that you can't find your future by ignoring and forgetting your past.  You have to accept, embrace, and try to understand what has happened to you and those you love.  Only when you do that can you move forward.  I think that's a very timely lesson for this particular moment in time.  We can't move forward by denying, canceling, or trying to erase our history, both personal history and our nation's history.  Only by accepting what has happened, wrong and right alike, and by learning from and trying to understand it can we move forward.  Those who just decry and deny those who came before us will be stuck here, wheels spinning but going nowhere.

Anyway, is this movie family friendly?  Nope.  Like I said, there's some attempted child-trafficking, in that some men try to buy Johanna from Kidd for unstated but obviously immoral purposes.  There's shooting and killing, with visible blood spatter but no gory wounds dwelt upon.  There are some very scary moments, with danger presented by people, by the elements, and by a runaway wagon.  A horse falls horribly and must be put out of its misery.  There's also a scene where a woman is lying in her underclothes in a man's bed and having a conversation with him, though he is dressed and not in the bed, but the implication of their previous activities is clear to adults and teens.  There's also discussion of massacres and scalpings.  And a lot of dead buffalo carcasses being skinned.  So, no, it is not a family friendly movie.  But I think it is a good one, and I would rather like to see it again.