This is one of those films that I saw a small part of on AMC when I was a teen in the '90s, just enough to let me know that I absolutely had to see the rest of it sometime.  This happened whenever we were on vacation and stayed at a hotel with a cable TV that got AMC.  Back then, that channel actually showed classic American movies, and they very helpfully put the name of the film at the bottom of the screen from time to time.  This was particularly awesome if you, like me, only managed to watch part of a movie.

I used to write down titles of movies in the backs of my journals, ones I really wanted to see the rest of.  Movies like We're No Angels (1955), And Now Tomorrow (1944), It's Always Fair Weather (1955), Night of the Grizzly (1966), and this.  There's still at least one movie that I saw part of that way that I still haven't tracked down, though in that case, I don't actually know the name of it.  I just know it was a jungle adventure in black-and-white that featured a man named Brandy with a mustache and a pith helmet.  My brother and I have spent twenty years arguing about whether or not Brandy was blond or dark-haired.  We may never know.

Anyway!  I didn't manage to get a copy of Mr. Hobbs Takes a Vacation until after I was married.  I loved it immediately, and promptly sent a copy to my parents too, because I knew they would love it too.  And they did.  Because how could they not?

Roger Hobbs (James Stewart) is a successful banker who lives in St. Louis.  He is, to understate things, a busy man.  When his wife Peggy (Maureen O'Hara) suggests that they take a vacation that summer, he's all for the idea... until he finds out what she intends.

Peggy wants to rent a quaint seaside house and share it with not only their teenage daughter Katey (Lauri Peters) and adolescent son Danny (Michael Burns), but also with their grown daughters, their husbands, and their children.  Roger protests that it won't be a vacation, it'll be a circus, but to no avail.

The house they rent turns out to be a hulking, quirky mansion.  The plumbing is unreliable.  The stairs are rickety.

The newel post comes off in Roger's hand in what I assume is a nod to It's a Wonderful Life (1946).

Mr. Hobbs spends a great deal of time fighting with a mechanical water pump that never actually pumps water for him, only ever for other people.

Even Peggy's optimism begins to fray.

Their daughters arrive, husbands and children in tow.  Roger spends what feels like hours lugging people's luggage up the rickety stairs.  His grandchildren are little terrors who call him "Boompah" and don't understand the meaning of the word 'no.'  His teenage daughter Katey refuses to talk to anyone, ever, because she just got braces on her teeth and is ashamed of them.

His youngest child, Danny, spends his every waking moment in front of the television, which he's rigged up with a homemade aeriel made from an umbrella skeleton.

And then, when Roger announces one morning that he's going to go out and get a little sun on the beach, ready to relax at last, their cook Brenda (Minerva Urecal) leaves in a towering fury because she thinks he swore at her.

Roger gives up on his grown daughters, but he's sure he can still save this vacation by connecting with his younger offspring.  He and Peggy take Katey to a local dance, where she refuses to dance with anyone.  When Roger comes up with a way to convince the boys in attendance to ask her to dance, she won't speak to them because of her braces.

But eventually, handsome Joe (Fabian) gets her to talk, and from then on, Katey spends her every waking hour hanging out with Joe and his friends, singing songs and listening to Bobby Darin records (I'm not even making that up).  So much for Roger getting to connect with her, but at least he's found a way to help her enjoy herself.

He's still convinced he needs to spend time with his son Danny, however, so he takes him out in a funny little boat called a "spatterbox" that he doesn't actually know how to handle.  They get lost.  They get found.  And Roger succeeds in connecting with this child, at least.

If all of this sounds annoying, sad, or just plain loony, I assure you that it is none of those things!  It's a funny blend of sarcasm, sweetness, and situational humor that shows how difficult it is for different generations to understand each other, while pointing out that love and kindness cover over a multitude of annoyances.  My favorite thing about this movie is how Roger Hobbs with narrate the events in his thoughts (provided to us via voiceover) in the most melancholy, extreme ways possible, kind of adding a bit of a Walter Mitty touch to it.

Maureen O'Hara and James Stewart have wonderful chemistry, really convincing me they're a middle-aged married couple who are comfortable with each other, but still attracted to each other, too.  I absolutely love both of them in this movie.

I also love that Tom Lowell has a bit part in one scene here, playing a boy who dances with Katey.  He played Billy Nelson on my favorite TV show ever, Combat! (1962-67), and it's such fun seeing him here in his first feature film.  (You might know him as Canoe in the original 1965 version of That Darn Cat!).  Also, Herb Alpert has a cameo as a trumpet player at that same party, and I love his music, so that's very cool to me.

Is this movie family-friendly?  Mostly.  There are a few old-fashioned cuss words, the misunderstanding about that "sun on the beach" remark, a little mild innuendo involving a girl who wears skimpy bathing suits, and a very odd moment where Roger Hobbs mentions buying Playboy magazines for his son Danny that always weirds me out a little.  Kids wouldn't know what that was, so it would be fine, really.  I would let my kids watch this, we just haven't gotten around to it yet. 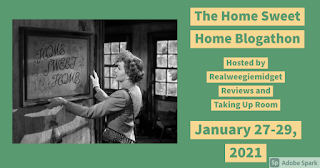 This has been my contribution to the Home Sweet Home Blogathon hosted this week by Realweegiemidget Reviews and Taking Up Room :-)  Happy Friday, everyone!