My Ten Favorite New-to-Me Movies of 2020

Well, this list is verrrrrrrry different from the last few years, isn't it?  Not a single movie here that was released in 2020.  I watched more than 80 movies this year, and only 9 of them were in the theater.  And, of those 9, only 2 were new releases.  Because 2020 was a really weird year.

Now, the main reason I watched about 20 fewer movies than last year is actually because I got super obsessed with The Mandalorian and watched all 8 of the first season's episodes three times.  And I've watched all of season two once, but most of them twice.  So, yeah... a great deal of my watching-stuff time this year was taken up with that, rather than movies.

(Plus, obviously, the theaters were closed for a long time, and a lot of movies I wanted to see got pushed back or released to streaming platforms I don't subscribe to.  2020, yeesh.)

Anyway!  Here's my list of my ten favorite movies I watched for the first time in 2020.  Enjoy! 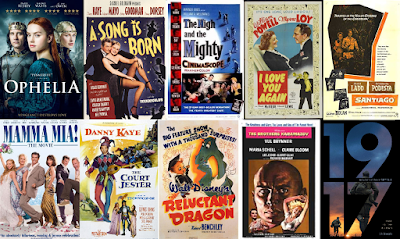 1. Ophelia (2018).  Gorgeous retelling of Hamlet from Ophelia's perspective, with some new twists on the story.  Ophelia (Daisy Ridley) falls in love with the dead king's son Hamlet (George McKay), though her brother Laertes (Tom Felton) is skeptical of the match.  Meanwhile, the queen (Naomi Watts) and new king (Clive Owen) have doubts about Hamlet's sanity.  It's based on the book by Lisa Klein, which I want to reread now.

2. A Song is Born (1948).  A musical remake of Ball of Fire (1941) in which a lot of professors (including Danny Kaye) making a history of music encounter a night club singer (Virginia Mayo) who's on the run from her mobster boyfriend.  Lots of amazing musicians like Benny Goodman, Louis Armstrong, and Tommy Dorsey have small roles, which adds to the fun.

3. The High and the Mighty (1954).  A trans-Pacific airliner develops engine trouble, and the pilots (John Wayne and Robert Stack) have to not only keep the plane in the air, but keep the various passengers (including Paul Fix, Claire Trevor, and Phil Harris) calm.

4. I Love You Again (1940).  A dull businessman (William Powell) whose wife (Myrna Loy) is about to divorce him gets hit on the head and has reverse amnesia, waking up to discover that he used to be a very smooth and interesting con artist.  Guess which version of him Loy likes best?

6. Mamma Mia! (2008).  A girl (Amanda Seyfried) about to get married tries to figure out which of her Mom's (Meryl Streep's) long-ago flings (Pierce Brosnan, Colin Firth, Stellan Skarsgaard) is her dad.  I liked it so much more than I expected to!

7. The Court Jester (1955).  A wandering minstrel (Danny Kaye) gets mistaken for the new court jester and ends up helping overthrow a dictatorial usurper and restore the rightful king to the throne.  With many funny jokes and pratfalls and lots of singing, too.

8. The Reluctant Dragon (1941).  A man (Robert Benchley) tries to pitch a story idea to Walt Disney, and ends up getting a tour of the Disney Animation Studio in the process.  Includes a young and eager Alan Ladd in a tiny role as a storyboard artist named Al.

9. The Brothers Karamazov (1958).  Three brothers (Yul Brynner, William Shatner, Richard Basehart) try to make their own way in life, but their father (Lee J. Cobb) keeps messing everything up for them.  Well, some of them mess things up pretty well for themselves, too.

10. 1917 (2019).  Two WWI soldiers (George McKay, Daniel Mays) have to take an important message to troops far away to stop thousands of men from walking into a trap and getting massacred.  The continuous-shot filming is cool, but it's McKay's haunting performance that stuck with me long after the film had ended.

What were your favorite watches of the year?  Have you seen any of these?

If you want to read my lists from past years, you can find them at the bottom of this page.