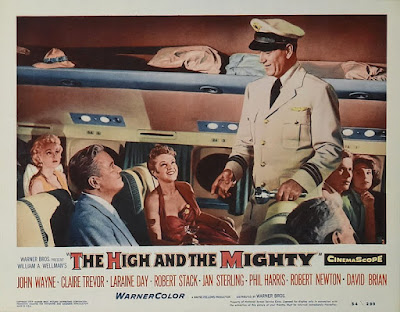 You know what I'm a huge fan of?  Slow-burning, character-driven dramas.  Which is exactly with The High and the Mighty (1954) is.  It's also an early disaster movie, of the airplane-based variety that got very popular in the '50s.  Happily, it focuses more on the drama than the disaster.  Happily for me, anyway -- if you're in it for the pyrotechnics, this probably won't be your favorite.

Also happily, it stars John Wayne.  And quite a few other familiar faces too, like Claire Trevor, who co-starred with Wayne in his star-making film Stagecoach (1939).  She's got a small part here, but she makes the most of it, bringing warmth and humor and kindness slowly to the surface, letting her real self slowly outshine the brassy, brittle exterior she'd so carefully crafted.  I really wish she'd gotten more meaningful encounters with Wayne, as they shared such wonderful chemistry 15 years earlier.  But her character attracted a different man instead.


Paul Fix is here too -- the person who made more films with John Wayne than any other.  He's playing a sweet old man who says his bones are full of holes and his neck is too weak to hold his head high anymore, and yet he's a firm and steady anchor for several other characters who find themselves tottering under the weight of uncertainty.


I didn't know Pedro Gonzalez Gonzalez was in this until he showed up on the screen, but I was so happy when he did!  He always plays just the most helpful characters.  Here, he got to play a really smart sailor who built his own radio -- he uses it to relay messages between the distressed airplane and the people trying to rescue them.


But I'm getting ahead of myself.  So, the whole movie starts out on Hawaii as a crew prepares to take off for California.  We get to know just a smidge about some of the characters there, as they check in.  That was a totally fascinating part for me -- was it REALLY that easy to get on a plane in the '50s?  You just walked up, gave them your ticket, stated your name and date of birth, they cross-checked you with their passenger list, and you're hunkydory.  Unless they weren't certain you were a US citizen, in which case you had to go talk to people at another desk.  But wow.  Can you imagine that kind of world?


Right, so we get to know just a little about the pilot (Robert Stack) and co-pilot (John Wayne) before they take off.  We learn that the pilot is boring and we should ignore him, and that the co-pilot is very sad and haunted because of personal tragedy.  And he's been flying since 1917, which means he's like a decade older than Wayne was at the time because Wayne was only 10 in 1917.  But anyway.  He's supposed to be pretty long in the tooth for a commercial pilot, but he's kept on because he's so experienced.


Then up we go.  This movie starts out slowly, building interpersonal tension before any disasters strike.  We've got a lot of people to get to know.


There are newlyweds (Karen Sharpe and John Smith) who spend an awful lot of time making out -- they're on their way home from their honeymoon and worried about starting real life when they get back.  There's another couple (John Howard and Laraine Day) who are getting ready for a divorce because he wants to sell the advertising company her father left to her so he can buy a mine or something in Canada.

Then there's the jolly couple (Phil Harris and Ann Doran) who always look on the bright side of life, even when their vacation plans keep getting interrupted or derailed.  They try to cheer other people up a lot, but when disaster strikes, they learn whether or not their optimism and hopeful outlooks are real or not.

Another couple (Robert Newton and Julie Bishop) are mildly nice to each other sometimes, and mildly bored the rest of the time.  It took me like half the movie to figure out why Newton was so familiar -- he played Long John Silver in the Disney version of Treasure Island (1950), but without his piratical accent, I couldn't recognize him for the longest time!


The single characters get their share of the spotlight too.  Especially Joy Kim's emigrating Korean woman who carries so much joy and wonder within her at the thought that she's really going to live in America.  I liked her very much indeed -- she was such a believable mix of hope and apprehension.


Then there's a rocket scientist (Paul Kelly) who regrets all his achievements because they mean potential misery and death.  There's a former beauty queen (Jan Sterling) who's terrified that the man she's in love with (William Hopper) won't think she's beautiful when he finally meets her.


One wealthy businessman (David Brian), one not-so-wealthy businessman with a big grudge against someone (Sidney Blackmer), and a fisherman going home to his family (John Qualen) round them out.  Oh, except for a little boy (Michael Wellman) travelling alone because his parents are separated and keep shuttling him back and forth across the Pacific.  He spends most of the movie asleep, though.

Then there's the crew.  I already mentioned the pilot and co-pilot, but the lone flight attendant (Doe Avedon) gets a lot of storytime too.  She's got a lot of guts, and she never freaks out in front of the passengers, even when they are in the most obvious kind of trouble.  We also have William Campbell as a radio operator or something (mostly he's just here to toss snide or snappy remarks in once in a while), and Wally Brown as the middle-aged navigator with a fast wife back home that causes him a lot of grief.


Now, mix all those people up and get some nice interpersonal conflict going for the first hour or so, and you have yourself a real interesting recipe for a disaster, even if nothing happens to the plane.  But something does -- an engine catches fire after they're too far from Hawaii to turn back.  And so they have to face the fact that they probably will have to make a water landing and spend some time in the life raft before they get rescued.

SPOILERS IN THE NEXT TWO PARAGRAPHS!

I was a little disappointed that they never actually made a water landing because they'd spent a lot of time building us up for it by giving the passengers lots of instructions on how to survive the landing and what to do in the life raft.  But they end up not having to do that after all, and while I was happy for the characters not to have to go through that, I kinda would have liked to see how that played out.

Of course, it turns out that the experience and savvyness of Wayne's character save the day.  We would expect no less.  We get a totally happy ending, everyone landing safe and sound in California.


John Wayne looks excellent in this film.  In his forties, he's handsome and commanding in his pilot's uniform.  He'd really hit his stride as an actor by this point and was convincing as a competent yet weary man who has many regrets, but keeps plugging along anyway.  I'll be watching this one again. 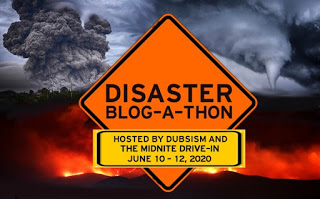 This has been my contribution to the Disaster Blogathon hosted by Quiggy at The Midnite Drive-In and J-Dub at Dubsism.  Check out their blogs for links to the other blogathon entries!
Posted by Hamlette (Rachel) at 7:44 AM