My Ten Favorite New-to-Me Movies of 2017 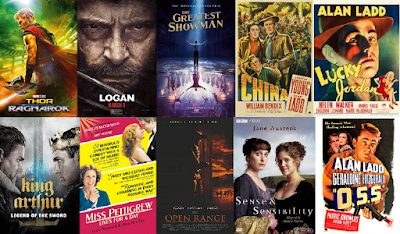 1. Thor: Ragnarok (2017) Thor (Chris Hemsworth) and Loki (Tom Hiddleston) and the Hulk/Bruce Banner (Mark Ruffalo) and new pal Valkyrie (Tessa Thompson) work together to get off a wacky planet ruled by Jeff Goldblum (Jeff Goldblum) so they can stop Hela (Cate Blanchett) from taking over the Nine Realms and unleashing murder and mayhem, etc.  I've seen this four times in the theater, and if only they'd show it at a workable time, I'd go see it again in a heartbeat.

2. Logan (2017) In the bleak future, Wolverine/Logan (Hugh Jackman) is slowly dying, poisoned by the adamantium grafted to his skeleton.  He's clinging to the dregs of his existence so he can care for Professor X (Patrick Stewart), really just waiting out the days until one or both of them can die.  Then a young mutant (Dafne Keen) on the run from a brutal opportunist (Boyd Holbrook) gives him one last chance to be more than a lonely old man.  I cry a lot over this movie.

3. The Greatest Showman (2017) P.T. Barnum (Hugh Jackman) dreams and schemes his way through life, searching for a way to be important and successful.  Finally, he realizes that he's already important and successful because he has a wife and two daughters whom he loves and who love him.  Also, there's lots of singing and dancing and fun circus stuff.

4. China (1943) An American profiteer (Alan Ladd) and his best friend (William Bendix) reluctantly help a teacher (Loretta Young) shepherd her young female students across war-torn China to safety.  Once again, Ladd excels at convincing us that a sour, cynical character is worth caring about.

5. Lucky Jordan (1942) A racketeer (Alan Ladd) gets drafted into the army, where he causes trouble, deserts, helps save a McGuffin from the enemy, and ultimately... really doesn't change much, which charms me somehow.  He does learn to care about the woman (Mabel Paige) who's posing as his mother, at least.  A rather fluffy, yet very adorable movie.

6. King Arthur: Legend of the Sword (2017) Arthur (Charlie Hunnam) grows up lean and mean on the Londinium streets, not learning he's the son of the late king (Eric Bana) until he's an adult.  He reluctantly agrees to take on his uncle, Vortigen (Jude Law), who killed Arthur's father and usurped the throne.  This one is a fun ride.

7. Miss Pettigrew Lives for a Day (2008) When a middle-aged governess (Frances McDormand) loses her job, she accidentally takes a new position as personal assistant to a glamorous singer (Amy Adams) who makes very bad life decisions.  Over the course of one day, Miss Pettigrew sorts out a variety of the singer's problems, be they romantic or professional, and finds a new path for her own life.  I really must review this one here soon.  SO good.

8. Open Range (2003) Free-range cattlemen (Kevin Costner, Robert Duvall, Diego Luna, and Abraham Benrubi) tangle with a corrupt lawman (James Russo) over whether or not they can graze their cattle near the lawman's town.  There's also a love story.  Another one I want to review here, though I need to rewatch it before I do.

9. Sense and Sensibility (2008)  When their father dies, sisters Elanor (Hattie Morahan), Marianne (Charity Wakefield), and Margaret (Lucy Boynton) must leave their home with their mother (Janet McTeer) to live in a much smaller, cheaper place.  The sisters fall in love with various gentlemen (Dan Stevens, Dominic Cooper, David Morrissey) and... why am I even explaining this?  It's the Jane Austen story, you probably already know what it's about.  (Yes, it's technically a miniseries and not a movie, but whatever.)

10. O.S.S. (1946) New spies (including Alan Ladd and Geraldine Fitzgerald) get trained by the Office of Strategic Services, then are sent on a mission behind Nazi lines during WWII.  An entertaining and fairly accurate portrayal of wartime spying.

Any surprises here?  Probably not.  Alan Ladd, Hugh Jackman, westerns and superheroes and musicals and action and drama.  Kind of my usual things, huh?  I suppose the one surprise might be that Star Wars: The Last Jedi is not here.  Doesn't mean I hated it, I just didn't love it.