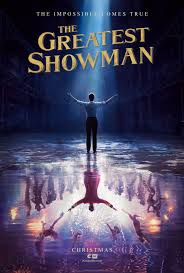 If I had to sum up this movie in one word, it would be celebration.  Not that it's a movie filled only with sunshine and rainbows, because it's not -- there's some genuine darkness here and there.  But that only serves to make you appreciate the light more.

For centuries, actors and actresses and other showbiz folk were viewed with suspicion because so often they were "different."  Sometimes that was because they were a different race, from a different country or region, had strange abilities, even were physically unusual.  Sometimes it was because they were so transient, moving around from place to place in order to find an audience.  Theatre people have been viewed as everything from amoral to immoral to downright dangerous.

I mean, think about what happens in Hamlet when the troupe of actors arrives.  Polonius, though he has acted in the past himself, treats them with disdain.  Prince Hamlet insists they be treated with dignity and spends quite a few words on how important they actually are.  He's clearly in the minority with his views in Elsinore, though.

But the theatre world has also long been the place where misfits are welcome.  Weirness, quirkiness, oddness, even freakishness is welcome there.  Embraced, even.  Being different can be an asset in theatre, not a handicap.

It probably won't surprise any of you to learn that when I was in college, I was considered weird.  (I didn't go to high school, but if I had, I'm sure I'd have been weird there too.)  I was homeschooled, I enjoyed studying, I liked old movies and old music and old books.  I didn't smoke, didn't party, didn't cuss, didn't skip chapel unless I was sick, didn't drink alcohol until I turned 21, and didn't like sports.  Total freak, in other words.

And I hung out with the weird people too.  The girl with the black lipstick and all the black clothes and the staggering collection of Metallica CDs.  The guy with the tattoos and dyed hair.  The girl who wore pants under her skirts and quoted Arlo Guthrie songs.  People who were weird, who were unusual, who were different.

I wasn't quite in the theatre crowd in college.  I lurked on the fringes of it.  I painted scenery.  I sang and frolicked in the chorus for three musicals.  And I was friends with some of the theatre people, and went to every play they put on.  Even at a tiny, Lutheran college in the Midwest, the theatre crowd was where the weird people got to be embraced and included.  Didn't matter if you were tall or short, skinny or fat, black or white, talented or just enthusiastic -- you were welcome there, and something you did well would be found, fostered, put to use.

And that is what The Greatest Showman celebrates. 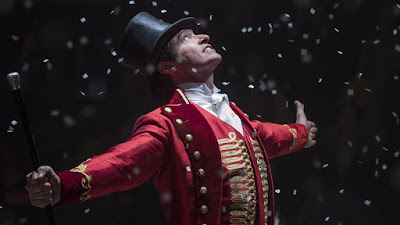 P. T. Barnum (Hugh Jackman) starts life poor.  Mistreated, malnourished, eventually orphaned, he takes a job with the railroad and goes west, coming back to New York City a respectable adult.  He marries his childhood sweetheart, Charity (Michelle Williams), who comes from a rich family but leaves them to live in a tenement with him while he works one job after another.  They have two sweet daughters, and although they're barely scraping by, they're happy.

Barnum loses his job, cons a bank into loaning him a lot of money, and opens a sort of museum of oddities, kind of like one of those Ripley's Believe it or Not places you find in tourist traps.  But it doesn't succeed until he takes his daughters' advice and hires performers and outcasts.  To the little man who would become known as Tom Thumb (Sam Humphrey), Barnum says, "They're laughing at you anyway -- why not get paid for it?"  He didn't try to convince the people he hired that they were normal, he helped them find ways to use their differentness to earn a living.  And by doing that, he gave them a chance for acceptance.  Not acceptance by the audiences who came to gawk at them, but acceptance from each other.

In the literary and theatre crowd at my college, we knew we were the weirdos.  We knew that the popular people laughed at us.  But we accepted and respected each other.  And that came to matter more to me, at least, than whether or not other people called me "the smart girl with really long hair" instead of my name.

There's a point in The Greatest Showman where Barnum stops accepting and including his performers.  He shuts him out of a fancy gala.  He turns his back on them and seeks after fame by a different route, escorting famous singer Jenny Lind (Rebecca Ferguson) across the country and promoting her concerts.  He abandons his family, his performers, everyone who counts on him.  And eventually, he realizes that by leaving them behind, he's left behind the people who accept him for himself as well.  Lind wants him to be her consort, not her manager, and when he refuses her advances, she breaks her contract and bankrupts him.  She even tries to rob him of his family by causing a scandal.

Lind shows that even in the world of the theatre, which the movie mostly peoples with kind, generous, helpful people, there are selfish and mean-spirited people as well.  There were in my college's theatre world too -- because people are people no matter where they are, all sinners everywhere.  The lesson here isn't that theatre people are perfect and everyone else are losers.  It's that accepting people despite their imperfections, embracing their weirdness, and not trying to make them be what they aren't is a good and honorable way to live your life. 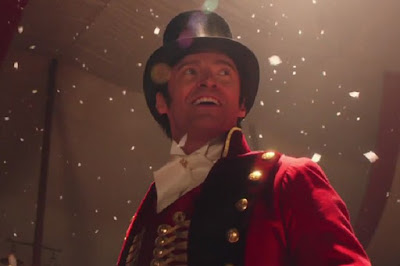 You may have guessed that I loved this movie.  I've had to recalibrate my list of favorite movies I saw in 2017 so I can fit this on it.  Hugh Jackman is one of my absolute favorite actors, and he shines so brightly here, obviously enjoying his every moment in the role.  Even the unhappy ones.  His scenes with his protege and later partner, Phillip Carlyle (Zac Efron), are particularly excellent.  They share a boisterous dance that I can't wait to see again.

Was this movie family friendly?  Remarkably so!  One song has the word 'd--n' in it, I think.  I don't recall any other bad language, though I may have forgotten something.  There are a few scanty costumes, some kissing.  A fire scene that would probably scare small children.  I would recommended it for maybe 8 and up.  I plan to let my kids watch it when it comes to DVD, with me to fast-forward through the fire scene.  There's also a non-gory brawl and the suggestion that Barnum's wife thinks he's been unfaithful, though as far as the movie shows, he was not.  They never say that out loud, it's all implied.

I have other thoughts about this movie too, but this is long and gushy already.  I may write another review when I've seen it again, though that might not be until DVD since I need to see Star Wars: The Last Jedi in the theater yet, so I might not have a chance to go see this again.  I would like to, though, because it is an awesome spectacle on the big screen. 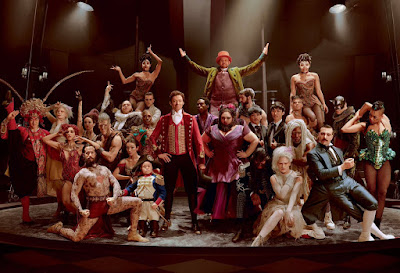