While filling out the Disney Princess Book Tag for my other blog recently, I thought to myself, "You know what would be even more fun than this?  A tag that compared stories to the Avengers."

And the more I thought about that, the more fun it sounded, so... I created one!  With a little help from my best friend on some of the categories. Like that princess tag, this isn't a tag devoted to superheroes, but rather one that uses attributes of the various characters to create categories that you then fill in with other movies.  Make sense?

Also, I got kind of carried away with adding characters, and so now there are like twenty categories.  What can I say?  I'm enthusiastic.  (Probably because I'm still riding the wave of giddy joy that is Thor: Ragnarok.) 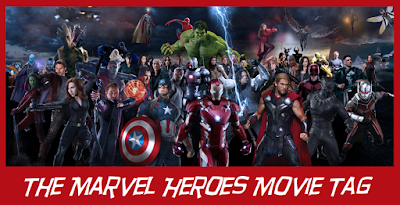 Thor: Name a movie about learning to use power for the good of others.  I think King Arthur (2017) fits that theme nicely.

Iron Man: Name a movie about an inventor.  I get such a big kick out of The Absent-Minded Professor (1961).

Incredible Hulk: Name a movie with a main character who has two sides to them.  How about Raiders of the Lost Ark (1981), where nerdy Dr. Jones is also a devil-may-care adventurer?

Hawkeye: Name a movie that involves archery.  Doesn't get much better than The Adventures of Robin Hood (1938) when it comes to archery in a movie!

Black Widow: Name a movie about spies.  The Man from UNCLE (2015) is always going to be my choice for this one.

Black Panther: Name a movie about royalty.  I really like Roman Holiday (1953) and its look at the pressures and responsibilities of being royal.

Vision: Name a movie involving androids or robots.  How about I, Robot (2004)?

Spider-man: Name a movie about teens.  Not a huge fan of teen movies, but I will always love Ten Things I Hate About You (1999). 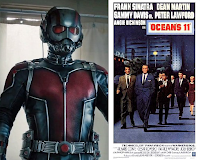 Dr. Strange: Name a movie where a character learns to be a better person.  I'll go with Gentleman's Agreement (1947). 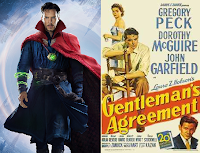 Falcon: Name a movie with a great sidekick.  Raise your hand if you adore the sidekicks in A Knight's Tale (2001)!  Mark Addy and Alan Tudyk just kill in their roles. 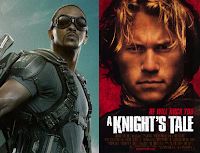 Loki: Name a movie with an antagonist/villain who steals the show.  You already know I'm going to answer 3:10 to Yuma (1957) for this.  I watch it primarily for Glenn Ford's Ben Wade, who is the antagonist and so fantastic I can hardly stand it.

Agent Coulson: Name a movie where an ordinary character faces an extraordinary situation.  I love how Sarah (Mary Louise Parker) in RED (2010) handles having the nice guy she's crushing on turn out to be a retired (extremely dangerous) spy.

Peter Quill: Name a movie with a character who is more than they appear to be.  I'll go with Cars (2006).  At first you think Doc Hudson (voiced by Paul Newman) is just a cranky old coot, but he's so much more.

Gamora: Name a movie with a character who changes allegiances.  John Reid (Armie Hammer) does that memorably in The Lone Ranger (2013), going from a law-spouting lawyer to a law-flouting vigilante.

Drax: Name a movie with a physically powerful character.  How's about Hercules (2014)?  I mean, I could basically go with any movie Dwayne Johnson is in, but that seems like the most logical choice.  And it's probably my fave of his movies.

Groot: Name a movie with a character who doesn't talk much.  In The Magnificent Seven (1960), Britt (James Coburn) only has 7 or 8 lines.  It's pretty fascinating to see how much he conveys with body language and facial expressions only.

Rocket: Name a movie with a talking animal.  It's a Dog's Life (1955) is all about a dog named Wildfire, voiced by Vic Morrow, and his travails as he goes from living on the streets to fighting other dogs to finally finding a home. 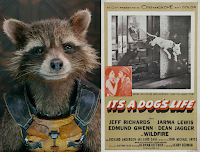 Coffee, Classics, and Craziness
Sidewalk Crossings
Through Two Blue Eyes
And Anybody Else Who Wants To Do This Tag!!!
Posted by Hamlette (Rachel) at 9:05 AM