(Note from Hamlette:  Thanks so much for contributing this post to the blogathon, Jessica!  You've definitely made me want to see this movie.) 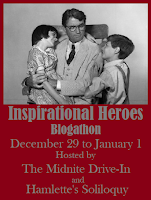 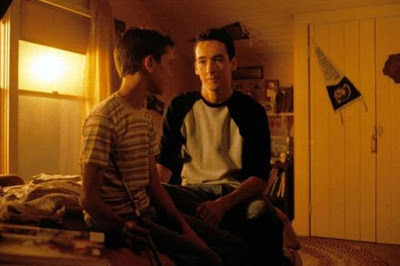 Man, I love this movie.

Stand By Me is my story.  And Gordie LaChance is my hero.  Maybe that’s a little weird—maybe a film about four (slightly) foul-mouthed 12-year-olds in rural postwar Oregon isn’t supposed to resonate with me on this level—but, as the immortal Chris Chambers himself says, “So what, man?  Everybody’s weird.” 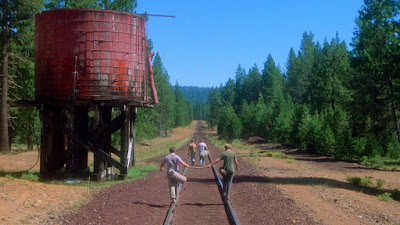 This movie’s such a classic, you probably already know what it’s about.  At the tail end of summer vacation, Gordie LaChance and his three closest pals—Chris, Vern, and Teddy—head into the woods to find a missing classmate’s dead body.  They’re vaguely hoping for some reward money, and maybe their pictures in the local paper . . . but, as their long, slow trek wears on, with laughter and song and a few exciting clashes with the neighborhood bullies in the bargain, our young hero Gordie begins to fall into a dark, dangerous place inside.

You see, Gordie knows something about death.  His older brother died a few months back—a car accident; and the memories still haunt him.  There’s a heartbreaking dream sequence, towards the middle of the film, where Gordie hears his father say clearly, “It should’ve been you, Gordie.”  Bad enough, if it were just a dream—but Gordie knows it’s not.  His own father truly does wish it had been his younger son who died in that crash.  Not his older one.  Not his All-American football star with a shot at a college scholarship.  He never asked to be left with the shy bookworm and dreamy budding writer that is Gordie LaChance; and he doesn’t try to hide his anger.

The bewilderment, the guilt—it’s written all over Gordie’s face; it underlies every move that he makes.  Vern and Teddy may not notice, but Chris does.  And we do.  As the story plods lazily forward, the tension builds, and builds, and builds . . . until they finally find the dead boy’s body in the woods.  And that’s when it all comes pouring out.

Gordie sinks down onto a nearby fallen tree—sobs shaking his skinny, 12-year-old body, tears trickling down his face.  “It should’ve been me.”  Talk about child actors all you want; Will Wheaton beats them all hollow with just this one scene.  Meanwhile, Chris—sweet, gentle Chris, played to starry-eyed perfection by a very young River Phoenix—puts an arm around his shoulders and tries to comfort his friend.  “Don’t say that, man.”  Gordie can’t stop crying:  “He hates me . . . my dad hates me.”  Chris’ response is one of the finest lines of the entire movie: 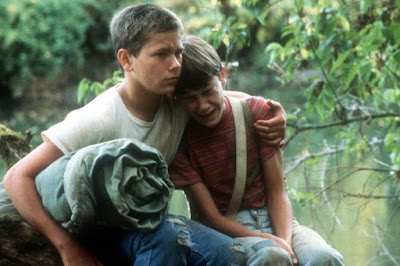 That’s when the bullies show up again.

They’ve been making a nuisance of themselves throughout the whole journey; but it’s worse this time. They want the reward money, you see.  When they find our four boys in the woods, with the body, they assume it’ll be a walk in the park to scare off the competition—and they get angry when they find out it’s not. 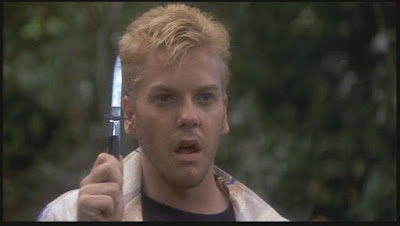 Ace (the gang leader) pulls out a switchblade and points it at the kids.  Vern runs off.  Teddy sasses Ace, then follows Vern.  Chris holds his ground, tells the bully in specific and colorful terms where exactly he can go and what he can do . . . and just as Ace jumps on him with the switchblade, a gun goes off.

It’s Gordie.  He’s standing there, on his own two feet, pointing a .45 straight at Ace Merrill’s heart, and the muzzle barely wavers a single hair—because this kid has guts of steel and if you think you know his limits, you’re wrong. 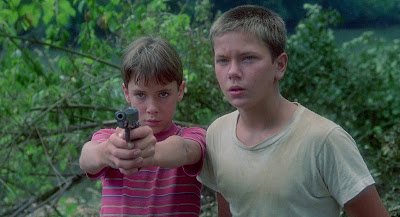 “You’re not taking him, Ace.  Nobody’s taking him.”

Do you see why the boy is my hero? 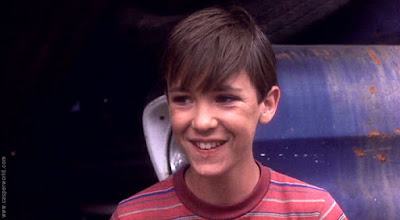