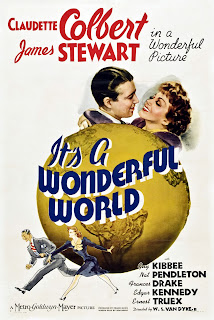 How had I never seen this before, or even really heard of it?  I mean, I knew Jimmy Stewart and Claudette Colbert had made a movie together, but I really knew nothing about it, or even what it was called.  So I went into this only knowing what the back of the DVD case said:  it's a screwball comedy about a private detective and a poetess.

Which is exactly what it is.  I'm not always a huge fan of screwball comedies, because so often I get frustrated by the way the characters just get themselves into more and more trouble by being nonsensical.  But there are a few screwball comedies that don't adhere to the nonsensical-characters trope, and those I enjoy.

P.I. Guy Johnson (James Stewart) has been keeping a wealthy man with a penchant for liquor and women out of trouble in preparation for his upcoming wedding.  But when the man gets framed for murder, Johnson gets sent to prison for hiding him from the police.  On the train ride to prison, Johnson discovers a clue that will prove his client's innocence and save him from the electric chair, so he jumps off the train.  (Because, you know, that's rational and everything.  I always jump off trains when I discover evidence that the police might be interested in.)(In his defense, though, the police do very listening to rationality themselves.)

Anyway, his escape is witnessed by a random passerby named Edwina Corday (Claudette Colbert).  He steals her car.  He kidnaps her.  He kicks her out of the car.  He re-kidnaps her.  They yell at each other for about 45 minutes, and then fall in love.  And, of course, he solves another murder, proves his employer's innocence, and saves another man's life.  Much of which he does while wearing a Boy Scout uniform that's 10 sizes too big and glasses so thick they make Coke bottles seem flimsy.  And, because he's Jimmy Stewart, he pulls off being both abrasive and adorable at the same time, and I'm not at all sure how.

Is this a brilliant comedy?  Well, my dad and I laughed and laughed while watching it.  My mom fell asleep.  So that tells you something, though I'm not sure what ;-)

Is this movie family friendly?  I think so.  There's a little bit of very mild innuendo here and there, and some slapstick violence.  Lots of bashing people over the head so they'll fall down with a silly expression on their face, that sort of thing.  No cussing :-)
Posted by Hamlette (Rachel) at 10:23 PM