Are you suffering from the post-holiday blahs?  Did you just not get enough books in your stocking this year?  Do you love getting stuff in the mail?  If you said 'yes' to any of those, then have I got news that's sure to excite you!  FOUR authors (including me) are each giving away one copy of their latest book (plus some other goodies) -- and annotating it personally (and that means in person). 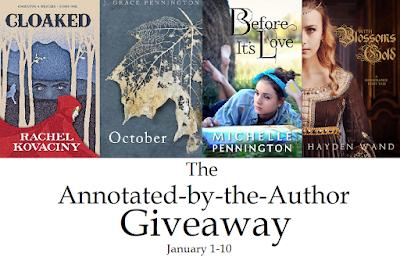 What do I mean by annotating?  I mean they're basically providing the equivalent of a director's commentary track, only for a book instead of a movie.  Each author is writing down all kinds of nifty stuff about their book on sticky notes and putting them inside the pages of their book, wherever said nifty stuff relates to the text.

What kind of nifty stuff?  Oh, things they learned while doing research, why they named their characters what they did, how they came up with different ideas for the story, anything cool like that.  The kinds of stuff you always wanted to ask an author about, in other words.

Not only that!  I mentioned other goodies, right?  Each author is also going to put a couple of cool little surprises in the package with their book, so that each lucky winner will get a few things that are somehow related to the book they won.  Kind of like a personally curated subscription box, but without the subscription.

Here are the books we're giving away, with lots of info about them and their authors.  The giveaway widget is at the very bottom of this post.

Little Red Riding Hood... re-imagined. Mary Rose feels uneasy around Mr. Linden from the moment she meets him on the stagecoach ride to her grandmother's ranch in Wyoming Territory. But he works for her grandmother, so that means he's trustworthy, doesn't it? Everyone else seems to view him as honest and respectable, and Mary Rose wonders if she's overreacting. She tries to ignore her suspicions until one night, she discovers his real reason for being at the ranch. Now, if she's going to save her grandmother -- and herself -- she's going to need to run faster than she's ever run before.

For Emily Baxter, life is simple. Her world is made up completely of school, church, and the community in the small farming town she calls home. All that changes one fateful Sunday, when a new girl shows up at Pleasanton Baptist—a girl unlike anyone Emily has ever seen. A girl with long red hair, crystal green eyes, and style and posture like royalty.  A girl named October. The months that follow are filled with magic—the magic of ordinary things, of finding pictures in the stars, of imagination and a new sense of beauty. But as time goes by, Emily begins to sense that her enchanting new friend may have secrets that could break the spell. Is October really all she seems to be?

"Just Friends" was harder than they thought. Moving to Arkansas is hard for Lauren, but it’s worth it to be near her boyfriend and pursue her art degree. That is, until she meets Jake, the guy her roommate is in love with. Now she’s stuck on a merry-go-round of love triangles, and someone is going to get hurt. Jake is focused on juggling his two careers and taking care of his feisty grandma. The last thing he needs is a serious relationship, so when Lauren moves in, it's okay that she's dating someone else. Until being her friend is no longer enough.

She never wanted to leave the tower. He never wanted to rule the country. Nella has lived quietly in her tower in the woods for over a decade. After dangerous accusations drove her and her grandmother away from their village, they escaped deep into the forest where no one would try to harm them. Now, after her grandmother's death, Nella is alone, and she is determined to stay that way. She has no patience for a world she deems judgmental and ignorant. Or so she tells herself. In reality, her paralyzing fear prevents her from stepping foot outside of the tower. Prince Benedict Allesandro is an adventurer- a rescuer who prides himself on saving the weak and unfortunate. When he hears rumors of a beautiful damsel trapped in a tower, he rushes to her rescue...only to find a woman who most definitely does not wish to be saved. But when war breaks out, this reckless prince and reclusive maiden are faced with overcoming their deepest fears in order to determine not only their own fate, but that of their entire country.


Enter via this widget:

This giveaway runs from today (January 1) until January 10.  The Rafflecopter widget will choose five winners on January 11, and we will then notify the winners that they won.  When we notify them, we will also ask them for their mailing addresses so that we authors can send you your prizes!

This giveaway is open to people will US mailing addresses ONLY.  Sorry, friends in other parts of the globe -- we're mailing these out ourselves, and we're all indie authors with very little spare cash.  No purchase necessary, void where prohibited, yadda yadda yadda.  If a winner does not respond to their notification email by January 17, they will be disqualified and a new winner will be selected for the prize they would have gotten.  So be sure to use an email address you check frequently when you enter your info into the widget!!!

Happy New Year!
Posted by Hamlette (Rachel) at 8:31 AM